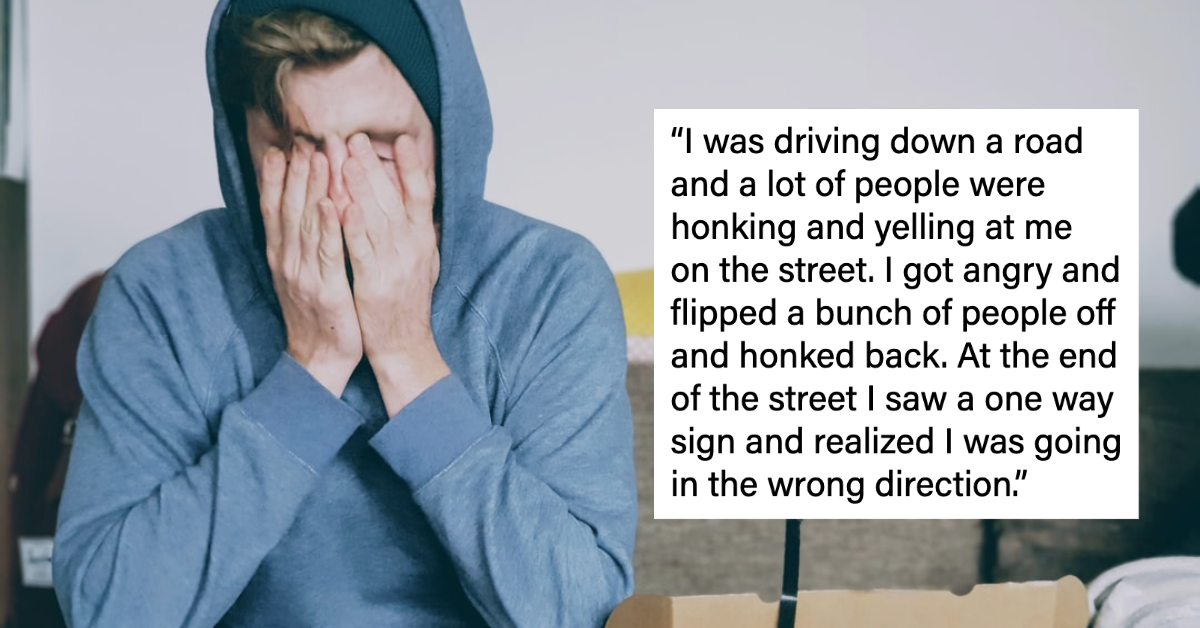 We’ve all had them: moments when we behave like complete a**holes. It could be anything from treating a service professional rudely, making an offensive comment, being a bad listener, shaming someone for how they look or dress, or refusing to help someone in need because it’s inconvenient. On Reddit, folks are gathering to share some of that shame in what feels like a group catharsis. Oh, and also reassuring people that they definitely don’t have to make the same a**hole mistake twice.

“Someone I hadn’t talked to in years came up to me and started telling me about how they haven’t been doing that good lately and that they found out they have cancer. Well…I was at work and only half paying attention so after he stopped talking I said, ‘That’s good.’ Haven’t seen him since.” — The_Crusadyr

“Years ago I went into a hot topic and as I was at the register, the girl working started telling me about all the new Metallica shirts they had gotten. For some reason, I told her I wasn’t really into wearing band shirts anymore, which was mostly true, and even though I didn’t mean to, it came out sounding really snobbish. At the time, I thought her reaction was kinda strange, even accounting for my accidental condescension. Shortly after I left the store I remembered I was wearing a NIN shirt.” — Danwoll

“I was driving down a road and a lot of people were honking and yelling at me on the street. I got angry and flipped a bunch of people off and honked back. At the end of the street I saw a one way sign and realized I was going in the wrong direction.” — PuttPuttSavedTheZoo

“In early high school, late 90’s, so if you got a girls number it was the house number- I called a girls house and her dad answered. She was out, but I noticed his speech was a bit slow and slurred. Next day at school I mentioned I had called, and asked if her dad had been drinking…well turns out he didn’t drink much since his stroke. Still feel awful about that!” — Ordinary_Shallot_674

“I was making fun of an old guy I’d seen outside our school at a basketball tournament to some friends in the locker room. He looked and talked like Farmer Fran from the Waterboy. Turned out to be the dad of one of the guys I was talking to. Still can’t even think of that movie without it bringing up endless amounts of shame.” — Broncos_Fan

“I was a senior in high school and was waiting for my dad to pick me up. At the time, I was also the head student athletic trainer. As my dad pulled up in his 1971 Ford Galaxy with a big old V8 engine (and this was in 1992), a couple of freshman football players commented, ‘Hey! I wonder whose dad is driving the Uncle Buckmobile!’ I turned around and glared and said ‘Mine.’ They realized who it was and quickly shut up 🙂 it was kinda awesome, and my dad got a kick out of it.” — kathatter75

“I was drunk at a pub and shouted for the band to play Free Bird. They stopped in the middle of the song they were playing, started up Free Bird and called me up on stage to sing it. I froze, forgot all the lyrics and made an absolute ass of myself. Props to that band though.” — Zannishi_Hoshor

“When I realized the reason I’ve lost so many friends is that I’m so shitty at getting back to people.” — saltedaqua

“I once told the joke ‘what’s the hardest part about eating a vegetable? The wheelchair.’ To a girl in high school. She just stared blankly at me and said, ‘you don’t know about my brother, do you?’ She then pulled out her phone and showed me her lock screen. A photo of her and her brother, who had been wheelchair bound since birth…Not my most proud moment.” — xxSuperBeaverxx

“For years I used the ‘The same thing happened to me’ line whenever someone opened up to me. Instead of just shutting up and listening to them. But yeah, working on it.” — xodagny