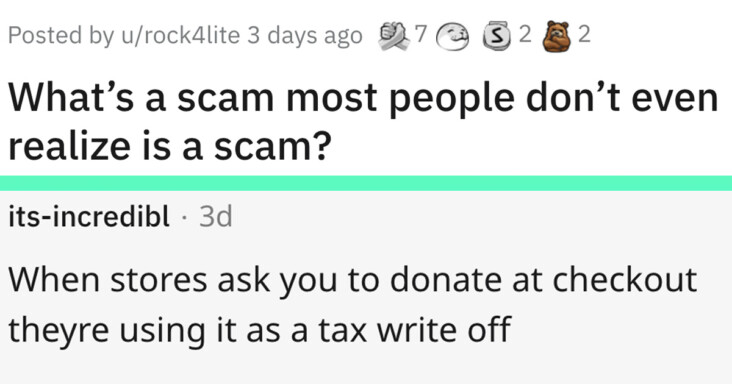 The world is SO full of scams and tricks designed to take your money, it’s no wonder you probably can’t keep track of them. Thankfully, Reddit has put together a thread of people sharing common scams that people may not even realize are cons.

Here are some of the top answers to the question, “What’s a scam most people don’t even realize is a scam?”

Don’t get me wrong, the big ones that run the large channels are probably worth it as they act more as a production company. They provide funding, legal consul, making deals with advertisers, etc.

However, if you’re run a smaller YouTube channel that starts to get some success and are contacted by an MCN it’s always a scam. They’ll tell you they will provide you with ways to grow your channel, but it’s usually just a webpage in the vein of “10 things that will help your channel grow,” that you could get after 5 seconds of googling.

They’ll also make it sound like you get more of a cut from ad-revenue EX: “YouTube takes 30% of your revenue, while we only take 15%.” Makes it sound like you get to take home 85% now right? Wrong, they take their cut afterYouTube takes theirs, you get to take home 55% and they take 15% for doing literally nothing. The language in their contracts is so deceptive its disgusting.

Even more official MCNs like Frederator would do this. I don’t hear about MCNs much anymore, so hopefully they’re dying out, but finding out I was being scammed years ago sucked.

Unpaid internships. What the actual f**k is wrong with America.

The US healthcare system. Hell, just name any aspect of life in the US and there’s probably a scam somewhere in there.

4. Not This Girl’s Best Friend

Diamonds. Diamonds are a fairly common gemstone but the world’s supplier of them is a monopoly and they hoard the majority of their stock to jack the prices up. Emeralds, Rubies and Sapphires are actually rarer than diamonds but cost less because of this.

Planned obsolescence. Appliances being designed to fail sooner in order to sooner create demand for a replacement. In the same vein, devices being designed to not be repairable, so that you need to invest in a shiny new specimen whenever fashion or the predesigned breakdown require it.

“Woman’s” anything. 90% are just colored different. Razors are the biggest offenders IMOP.

I’m most intrigued by the vague life coaching ones who use lots of big words and mention specific figures they have supposedly earned but there is no clarity on what exactly they do.

The concept of “superfoods” and “organic” anything. I work at a smoothie bowl place, and people will come in and literally pile 1500 calories full of peanut butter and granola into a bowl and think it’s healthy because they put some superfood organic something into a bowl. It’s literally pumpkin granola cereal from the store down the street, it’s not going to cure cancer.

Boomers getting free healthcare (Medicare) while voting against anyone else getting it.

“Hustle” culture. Capital doesn’t even have to manage you anymore; you manage yourself by convincing yourself that lack of sleep is good and that you should be working around the clock.

When stores ask you to donate at checkout, they’re using it as a tax write off.

“Shrinkflation.” Where they give you less, and charge you more.