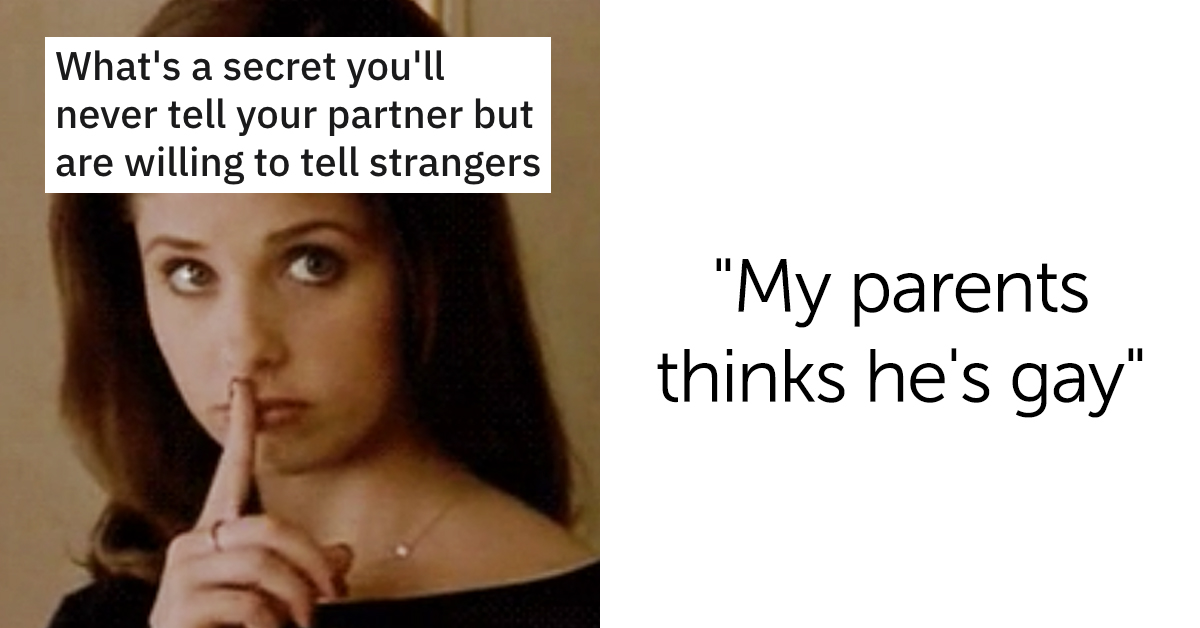 Keeping secrets from your partner is never a really great idea; inevitably people will find out and want to know WHY you kept something from them. But these secrets are actually pretty pure and sweet — so maybe it’s okay to keep them to yourself.

u/Bisexual_Space_Lover recently asked Reddit “What’s a secret you’ll never tell your partner but are willing to tell strangers on Reddit?” and the fine folks delivered.

That my wife always screams, she just doesn’t seem to be able to talk at a normal level. Feel like she should be selling fish at a market place…… Love her though.

My husband loves talkative cats. When we first got our kittens I gave them a treat every time they made a meow or chirp. Since I was working from home they ended up becoming very vocal. He still goes on about how lucky we are to have such talkative cats in a weekly basis

My wife shit while delivering our son. Something she was terrified she would do. The nurse cleaned up very quickly and gave me a look that needed no explanation. I never said a word. She talked after delivery about how happy she was that didn’t happen to her. I’ll let her keep that peace of mind for life.

Sometimes I just sit in my car outside work or our apartment for 20-30 minutes because I need some time alone. I have my mind full to the brim at work and rarely get time in the house alone. Sometimes I just need it to be quiet and not have to pay attention to anything!

The reason i wasnt hungry that one day in dublin was because when i stayed behind to get ready while she waited in the lobby i ate the entire box of leftover chicken wings that we took home from the restaurant the day before. I ate 15 cold, oily chicken wings in about 5 minutes at 9 AM before heading out for breakfast.

Can we get a bit dark? We had our cat euthanized at our home. We buried him in the backyard. Hours and hours later, after my husband went to sleep, I dug up the box. I just wanted to make sure we didn’t bury him alive. I just had this panic. I had to see that he was dead and safe. He was. I reburied him and never told my husband. Rest easy my little love.

I’ve broken your personalized cup your sister got you three times.

I recreated the design on paint and got some screen printing stall at the mall to print it on the cup, each time it looks a little bit different 😂

When I asked her dad for his blessing I had some liquid courage first and I can’t remember what his response was. Let’s hope it was yes because we’ve been married for over 2 years.

I never paid for her engagement ring.

I went to a custom jeweler to have her ring made. It’s a beautiful piece, and she loves it dearly, and it certainly wasn’t cheap – appraised and insured for around $10k.

The jeweler was dealing with a lot of family issues at the time, and was incredibly disorganized. I went to pick up the ring and brought my checkbook to pay for it, and when she handed me the ring I took it out and asked her who to make the check out to. She said “oh no don’t worry about it right now, just send me a check in the mail!”.

I thought that was strange, but sure okay. She then hurried off to help another customer and I left. But she never told me what the final price was.

For the next 6 months, I texted and called the jeweler asking “hey just tell me what amount to put and I’ll mail you the check!”, and there was always a reason she couldn’t tell me “oh sorry I’m out right now, I’ll find it and text you later!”. Her shop was a few hours away from where I live, so it wasn’t feasible to stop by and handle it in person.

I tried for 6 months, but after that I stopped calling/texting and just figured I got the ring for free. I wouldn’t tell my spouse, because I don’t want her to think I took advantage of the situation or that somehow the ring isn’t as ‘meaningful’ because I didn’t pay for it.

Our cat didn’t break the towel rack. I did. I was pretending to be fighting zombies and grabbed it and… ripped the god damn thing off the wall. I heard her coming to check out the noise and looked down at my cat. She came into the bathroom to me asking my cat “Why did you think the towel rack could hold your weight? You silly cat!”

That’s as much as I love him, with all my heart and soul, even after a decade of being together, his relentless negativity and pessimism does my head in sometimes.

Last night you made fried rice with shrimp. I ate the whole bowl even though it tasted nasty. God it was awful.

I dropped the diaper rash cream container on our daughter’s head when she was like 8 days old. She let out this scream that still haunts me. When he came in the room to see what happened I lied and said I just dropped the lid on her.

What I actually paid for my woodworking tools

My husband complains about being in pain so much that I feel like there’s no room for me to be in pain. And sometimes I really resent that. I have a chronic health condition that I have no choice but to manage well because he wouldn’t know what to do if he had to care for me like I have to care for him.

My wife and i lost our future baby to a miscarriage. She once told me it felt like the universe was telling her i shouldn’t be a dad. Two hearts stopped beating that day and i haven’t told her how depressed i still am

That his parents are really pissing me off and I do not want to be around them anymore. They’re lousy grandparents to our son but not to his sisters children.

I am terrified that my partner will die because I know I am not really a functional adult outside of my work. I am good for playing with the kids, bringing in a decent income and making food, but the idea of single parenting and taking care of everything fills me with existential dread I have a hard time describing.