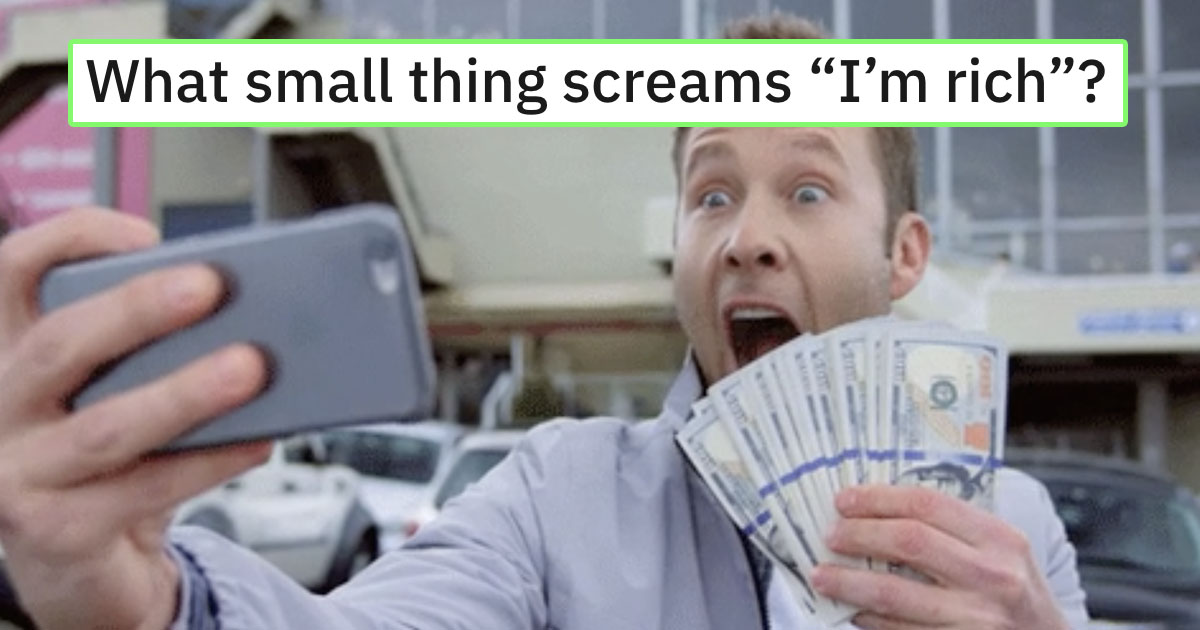 And the people of Reddit gave us some very good examples of the subtle things people might do or say that reveal they’re actually incredibly wealthy.

I can only dream of having this kind of dough.

They will never complain about the cost of something, but will nitpick the quality of work to death. —u/weaselpoopcoffee

I had a friend at university about 25 years ago who I’d assumed was from a similar background to my other friends and mine — middle class. The only thing that gave him away eventually was when I saw a letter he had written to his parents. In addressing the envelope, he had only needed to put the name of his house and the county it was in. No other details required. Turned out, his parents basically owned most of that county, and he was a viscount.” —u/itisee899

They spend money if it saves them time. Time is more valuable than money.” —u/tocksin

Perfect skin and good teeth. Rich people can afford to go to doctors and medical professionals for their appearance.” —u/VapoursAndSpleen

Working at a luxury resort, one thing I’ve noticed is that the people who want to give the air of being very wealthy will have lots of designer patterns on their clothes and accessories, like Louis Vuitton print, but almost all of the truly ridiculously wealthy people will basically wear nondescript leisure wear and really plain-looking clothes (like plain jeans and tees with no logos).” —u/FartAttack911

Not thinking twice, when making plans, about whether you can afford it.” —u/KindHearted_IceQueen

Not noticing you haven’t been paid in two months. I work with some people that pull in $20,000 or more a month. We had one come in mid-March and I said, ‘I don’t think I’ve been paid since December.’ Sure enough, two months didn’t pay out for some reason. He wasn’t even mad and just kind of mentioned it, like he was talking about the weather. If I miss a paycheck, I’d notice on payday.” —u/Graphics_Nerd

Steve Jobs never had a license plate on his car. He’d always lease for five months and 29 days, because in California you have to get a license plate within six months. His assistant would drop off his lease and pick up a new one. I used to live in the Bay Area and saw him leave Apple and head straight into the carpool lane at full speed. He never cared about getting ticketed.” —u/Taney34

If they refer to their vacation plans as ‘summering’ somewhere. They use seasons as verbs.” —u/GigliWasUnderrated

12. They can just fix things

They lack stress, eat out a lot, are never phased by surprises like, ‘Oh, my tire is punctured,’ ‘My oven’s broken,’ and ‘I need a new boiler.’ They can just get them.” —u/PenPaperShotgun

If a kid’s rocking To Boot New York kicks, their parents are balling.” —u/MrBillyLotion

An expensive watch that isn’t a Rolex. Rolexes are how rich people, or not even rich but ‘had-a-good-year’ show off wealth to poor people. A truly wealthy person will have a Patek or AP Royal Oak or a Mueller, and not necessarily even a flashy one.” —u/LaurenRhymesWOrange

When they online shop, they click, ‘SORT: PRICE: High to Low.'”—u/PhysicsDude55

If they pay with a black card, the rewards on those things are ridiculous, and the criteria to get one is also ridiculous.” —u/Bad_Parker5