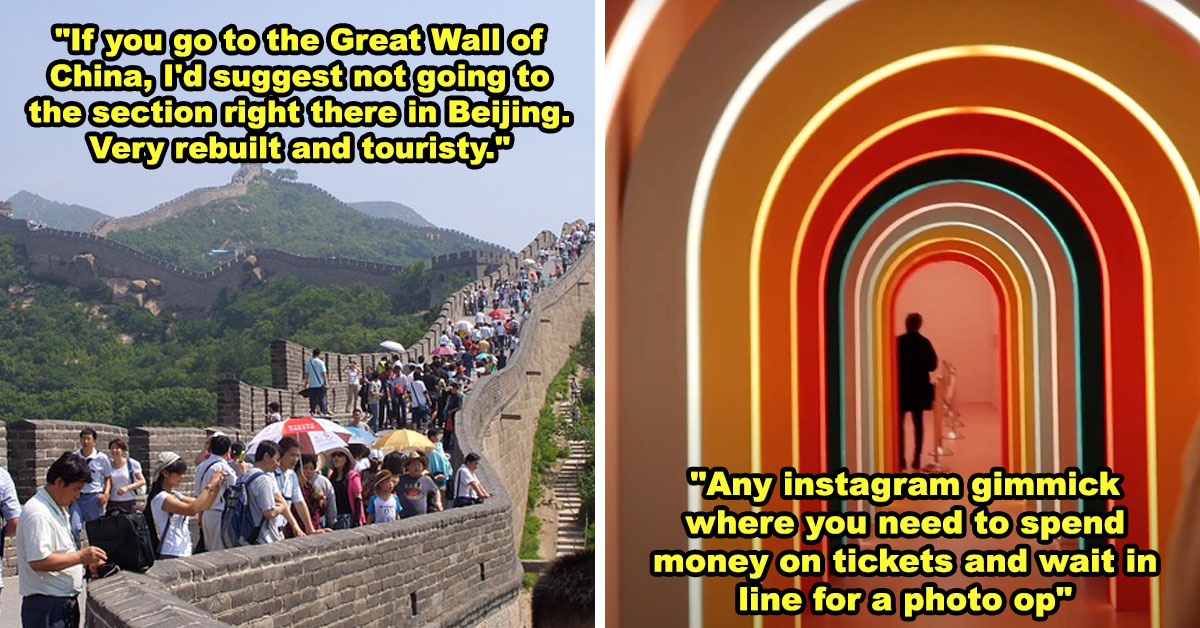 When I travel, I hate tourist-y stuff. I like to go and feel like I’m part of that new place, which usually means not ever doing anything even remotely sight-seeing-y.

For the most part, this has worked out pretty well for me, and imagine my smugness as I scrolled through the AskReddit thread from u/superlemondaze:

“What’s a tourist attraction you’ve been to that was 100% not worth the hype?”

I don’t know if it counts as a tourist attraction, but I kinda found Disney World to be a little uninteresting. Don’t see what Americans get so worked up about when it comes to it.

If you go to the Great Wall of China, I’d suggest not going to the section right there in Beijing. Very rebuilt and touristy.

Take a van ride a ways out of the city, to the Simitai section. Now there’s some uncrowded, old-school Great Wall.

Amsterdam has banners all over advertising the Torture Museum. Spoiler alert: humans are really fixated on shoving things into other humans’ butts. There, I saved you fifteen euros.

The Museum of Prostitution, on the other hand, is fantastic. It’s a really candid look at how sex work really operates, which is very unglamorous even when it’s legal, and the overall message seems to be, “if you must, here’s what you need to know and here’s what you’re supporting if you do.”

Romeo and Juliet’s balcony in Verona. Like, 10,000 people all crammed into this tiny alleyway just to see a balcony that I found out was built after the play was written.

The pawn shop from Pawn Stars. A guy who was with us in Vegas insisted on going, and the rest of us got dragged along. We got corralled through the store and there was literally nothing worth a second look there. Fucking waste of time.

I was particularly annoyed at the prices of used musical instruments there. I’ve been selling drums for 10 years, and I’m not about to buy a kit for higher than the new price just for the honour of having bought it there.

Put bluntly, this attraction is massively lame, no one even knows if this is the right rock or even if there was a rock.

A lot of people are familiar with the National Aquarium in Baltimore. It’s a really nice one, but never made sense why the National Aquarium was in Baltimore. Why wasn’t there an aquarium in DC itself? There’s a zoo, museums of all sorts, why no aquarium? Well, there was. It was in the basement of the Commerce Department building. It moved buildings in the city over time, but it was the longest operating aquarium in the country, being open for about 140 years.

…and it was exactly what you’d expect an aquarium in the basement of a federal office building to be. Dark, smelly, and nothing very good in it. Everyone leaving had the same reaction…”my expectations were low, and that was still disappointing.” It closed, for better or worse, in 2013.

Centralia, Pennsylvania. A town that has had a coal mine fire underneath it still burning since 1962. It sounds super cool to go see it but its just a few roads with graffiti on them and a bunch of ATV trails.

I would never ever, bring somebody to Hollywood Blvd during a visit. MAYBE, drive through it. Fast. So many cooler things to do in LA than see a crackhead Spiderman fight a crackhead Batman.

Branson. The Simpsons weren’t really joking when they described it as Las Vegas ran by Ned Flanders.

I always say that the biggest art and historical piece in the Louvre is the Louvre itself. The entire underground area was lost for ages, it used to be a water canal surrounding a mini castle thing at some point, with a big tower in the middle, walls and smaller towers around, and it was just one of the three bigger parts that form the museum today. You can see the base of the towers and walls to this day, some parts are visible for free just to the left of the inverted pyramid! 😃

The glass bridge over the grand canyon.

Total rip-off tourist trap.It takes HOURS to get there from Vegas

They charge you $20 to park in an empty desert

They charge you $30 per person to take the bus from the parking to the attraction (it’s like walking from parking into a mall – no distance at all!)

You cannot take pictures or bring a camera onto the bridge, but they will sell them to you, of course.

Go there to get scalped.

Pier 39 in San Francisco. I’m from the East Coast…I’d never been to SF before. Everyone said “skip Pier 39….it’s a tourist trap”. However…since I’d never been before…I figured I’d go and see for myself.

It’s a tourist trap. Nothing of value save for the  sea lions, and Musee Mechanique….other than that….chains & ripoffs.

I live in Atlantic City and I’m amazed that people actually come here for vacation. It’s just a few crappy casinos and some run down strip clubs. If you go one street off the boardwalk you’re in the slums. The food is good but incredibly overpriced.

Manneken Pis in Brussels. Don’t get me wrong, Brussels is BEAUTIFUL and I absolutely loved visiting. There’s so much interesting folklore and a lot of souvenirs and what not around Manneken Pis, and you expect it to be this really amazing statue… Until you see it. It’s down a tiny little street with hundreds of people stuffed into the corner where he sits. I know he’s very respected and loved in Belgium, but he’s just so tiny and the street was so crowded… I found it very hard to be excited once I actually saw him. Brussels is amazing though and I’ll definitely be back one day!

This may not be known to everyone but Magnolia Silos in Waco, TX as made famous by the TV show “Fixer Upper”. 100% waste of time and money. Everything in the store can be bought at Target or it’s just show merchandise.

People come from across the country for this little store. Go somewhere else man.