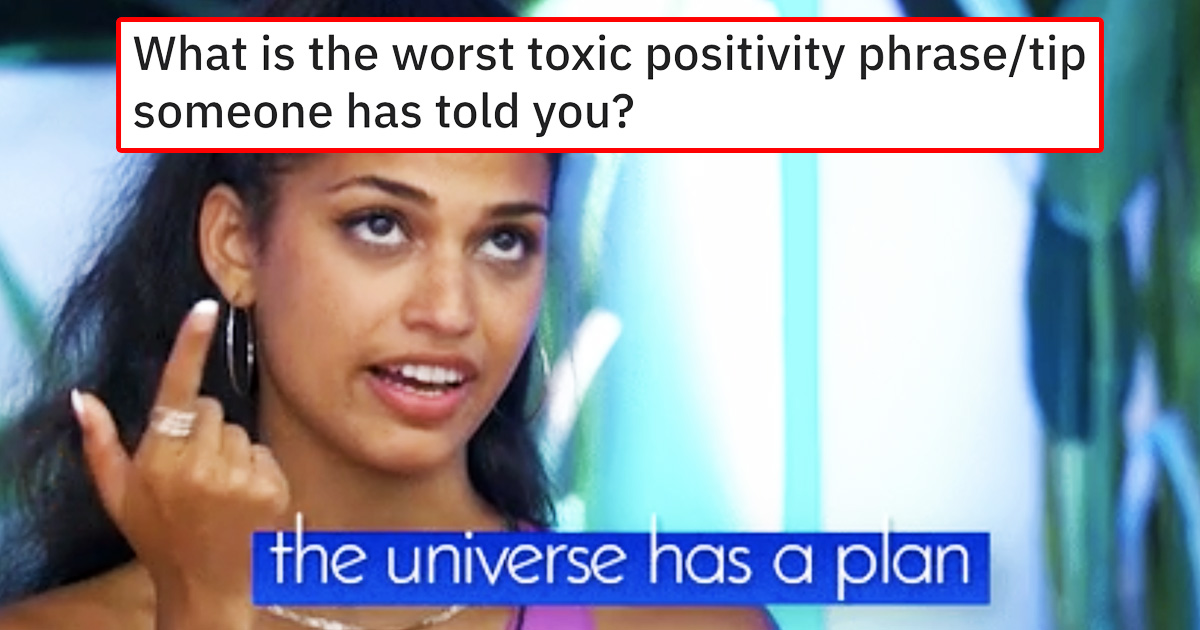 Sometimes we share our hardships or traumatic experiences with those around us but their responses fall short. People will try to encourage you or cheer you up by putting a positive spin on the situation but this can lead to your feelings being dismissed. This is known as toxic positivity.

Toxic positivity is defined as “dismissing negative emotions and responding to distress with false reassurances rather than empathy. It comes from feeling uncomfortable with negative emotions,” according to Right as Rain by UW Medicine.

In a recent Reddit thread, women have been sharing their experiences with toxic positivity, and the answers are pretty eye-opening.

The responses range from people encouraging women struggling with infertility to borrow a kid for a day to folks telling abuse victims, it could have been worse. In these situations, sometimes people just need a listening ear, a whole lot of empathy, and maybe some actionable advice to help them through.

Now, here are 20 women’s responses to the question: “What is the worst toxic positivity phrase/tip someone has told you? “

Maybe try to avoid them the next time someone comes to you for help.

You don’t need medication for depression or anxiety. You just need to go outside and smile more!

When my husband died unexpectedly at age 50 (together 32 years) more than one person said to me “my divorce was like a death too.” Nope, not even close.

My grandma telling me that I have to put up with nasty family members “because they’re FaaaMilYYYYYyyyy”.

Gtfo, they are bad people and I’m not going to let them poison my life because we’re related.

Different variations of “You can’t have kids? Take mine for a day and you’ll be happy you don’t have one of your own! Kids suck lol” Yeah, you being a shitty parent certainly makes me feel better about being infertile.

“God has a plan” was the immediate response I got any time I talked about my struggle with infertility. Yeah, well that’s not helpful OR comforting in any way whatsoever, and wouldn’t be even if I believed in your shitty, vindictive god, so you and he can both get f–ked.

In group therapy someone said that they’re proud, they never got depressed, no matter what life threw at them. Because they’re such a positive and strong person. With a person with depression sitting right next to them.

I am glad I don’t have a tendency towards depression either. But I’m not proud of it, because it’s a sickness you’re prone to, or you aren’t. It’s not a weakness. And the fact that we’re all sitting together in group therapy shows that we all have one or another unhealthy coping mechanism in place and so far, we weren’t able to positive-think our way out of them.

7. Even doctors get it wrong.

That’s just reminded me of a friend of my ex-husband’s who once said that depression wasn’t a real illness and people who thought they were depressed just needed to toughen up. Whilst sitting next to my best friend who (unbeknownst to this woman) had been suffering from depression since her teens and was just coming out of a particularly rough patch at the time.

What makes it worse was that the person who said depression wasn’t real was training to be a doctor.

“At least he doesn’t hit you!” like wow I’m supposed to put up with allllllll the BS because he’s doing something he should?

9. “Everything happens for a reason”

“Everything happens for a reason.” This is true; there are always causal factors that led to the outcome. That doesn’t mean it’s a positive. Sometimes it’s not because the Universe wants to make you stronger.

And every sentence I can hear when I tell people I don’t want kids. That toxic mentality of women have to be mothers. I’ve realized at 12yo that I never want kids. 13 later, I still haven’t changed my mind. My husband also doesn’t want kids so at least we’re on the same page.

11. “What if your partner wants children”

THIS!!!! and “what if your partner wants children.” It’s not hard to find a partner who doesn’t & still my choice lol…. People make it seem like you HAVE to have children as a woman or something is inherently wrong.

12. “You have it much better than other people”

Okay, I know that’s true. But I hate it when people invalidate my experience without being in my shoes.

“It’s not your situation. It’s about how you react to it.” – my bff

And how am I suppose to react to office sexual harassment of a senior management without the risk of losing my job and not be able to pay my rent, dare I may say???? There’s also the risk of ruining connections and forever barring me from the industry completely.

I was venting to my friend. All I needed was to vent and cry. I know the consequences involved with even a tiny move against this person who has such great influence my chosen feild. No, I cant just “react” my heart out, dear.

14. “What doesn’t kill you makes you stronger”

The whole “what doesn’t kill you makes you stronger” and “diamonds are formed under pressure” bullshit spin on negative events.

You know what? Sometimes things absolutely break you and serve no purpose for personal growth. And that’s goddamn okay. Something that allows one person to blossom will cause another to crumble. I saw a fantastic quote that basically said “the water that makes the potato soft will also harden the egg”. Aside from the fact it makes me hungry I think we could all do better to remember such things. Everyone reacts, handles, recovers from, things differently. No one is right, or wrong. No one should feel pressure to claim they are a ‘survivor’ instead of a victim or patient. No one should have to feel they need to claim that something bad ‘made me who I am today so I wouldn’t have it any other way.” Sometimes bad things are just bad, and that’s okay.

Anyone who says that trauma makes you stronger either has never experienced it, or is in denial.

I already commented this on someone else’s comment but people can fuck right off by giving credit for the good things in my life to the things that almost killed me, instead of to ME because of how i chose to react to the things trying to kill me.

and yeah, maybe I wouldn’t have what I have if it wasn’t for the abuse, but I think I would’ve rathered a more mundane life than literally being so beaten down, I had nothing to lose when I started throwing myself towards my dreams.. because i was an inch from death anyways. it’s not the type of motivation we should be romanticizing.

“Happiness is a choice.” Shudder.

My Grandma used to say that to me. She said it’s your choice to wake up happy. Like I was choosing to be unhappy.

I had depression from being raped from 6-10yrs and the guy tried to kidnap me from my school. She knew that it had happened to me too because I took the guy to court.

When my dad died, a lot of people told me ‘he’s in a better place.’

I know it’s super common to say, but we’re not religious in the slightest and we wanted him here, for f–k’s sake.

“Pain is all in your head”

Do f–k off with that.

“I just strive to be an honest person. I’m sorry if it hurt you”.

Some sh-t should just not be said ok?