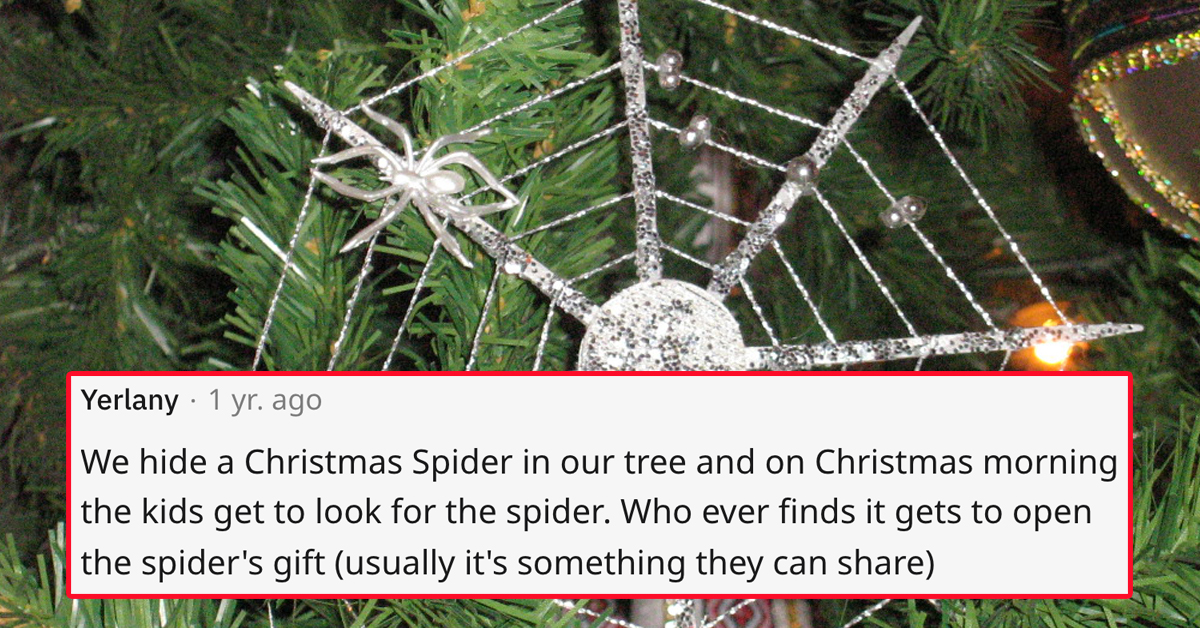 I’ve discovered that I continue the Hackett-family-tradition of making my child (…my dog) wait at the top of the stairs on Christmas morning. I’ll go down, put on the Christmas albums, make myself coffee, and THEN say “okay!” and she tears down the stairs to unwrap her gifts.

I read through this thread from Reddit user hellotintin100 asking what some “Christmas traditions were” and my heart was warmed. So grab your hot cocoa and get ready to smile.

“My best friend and I started a tradition of celebrating Christmas Eve Eve together. We switch it up each year, but we always dress up in Christmas outfits, have dinner, some kind of activity, and a movie. At dinner, we also exchange a book we picked for the other that we wrote a personal note inside. Then afterwards, we create a magnet for each other of our favorite photo from the night.” – edpumkin

“Every year, my wife and I buy an ornament for our tree that corresponds with something that happened that year. So we have a tree filled with all of these weird, wacky ornaments like a tennis ball (we started playing tennis that year), Swedish chef (Europe trip), Ship Captain Nutcracker (our first cruise), amongst many others. It’s such a fun tradition in December to debate what we to get and then finding something. And then reliving them all when we put them up.” – barrucuda

“My family has a tradition of leaving riddles on cards and guessing what the gift is before opening. We go around one by one, reading our hint out loud so everyone can guess, then open it and show the room. It ends up taking like five hours for everyone to get through their gifts, but it’s always a fun time.” – MyNameIsRay

“When we were younger, my parents had a tradition with us. We would always go out into the front yard with my dad to find the ‘perfect’ pine cone. Maybe a week or two before Christmas, we planted the pine cone in a pot and watered it. Then, overnight, it would become this magnificent, huge (to my young eyes), and fully decorated Christmas tree. It only worked in December and we were always told it was the Christmas magic. Then my sister and I figured it out when we found pine needles in my parents’ car.” – theatrekid97

“We eat rice porridge and hide a peeled almond in it. The person finding it is the winner, and the prize is a marzipan pig.” – HelenEk7

“Every Christmas, the kids in the house have wrapping paper put over the entrances to their rooms so they get to rip through it in the morning. It originally started as a way to keep a certain kid in when he kept coming out early and opening presents before everyone was awake.” – Essendxle

“My grandmother gave us a blowup Santa in an outhouse. My family thought it would look weird in our yard, so now we prank friends on Christmas Eve by putting it on the front door and waiting for them to see it.” – Memegodess1252

“Each year we cut a round off the bottom of our Christmas tree. We label it with the year. Over time, it makes a sweet display and reminder of years past.” – SARSStar367

“My grandpa would always get up on the roof about an hour after our bedtime and stomp around on the roof with sleigh bells.” – TheNoodyBoody

“We have signs all over our house spelling out ‘Leon’ instead of ‘Noel.’ It started out as a joke because my dad is dyslexic, but it stuck. We even named our dog Leon, and we’ve been doing it since I can remember.” – joceydoodles

“My brother and I stay at my mother’s house on Christmas Eve with our families every year. We still sit at the top of the stairs on Christmas morning until my mother tells us we can come down to the living room to see what ‘Santa’ left us. We’re both in our 30s and our wives and kids now sit on the stairs as well. It’s getting pretty crowded, but I wouldn’t have it any other way!”– ScoobJetson

“My parents were broke when I was a kid, but you’d never know it from Christmas. They always went all-out, put money on credit cards, etc. One Christmas, we were particularly broke, but dad went out and spent (probably most) of his paycheck on last minute gifts. When we got home, my mom had been with us all day, and since there was no money, she hadn’t gone food shopping. All we had were some cheap hot dogs and canned beans.”

“My parents put the beans in a pot over the fire, grabbed the hotdog cooker from when we went camping, and threw the dogs on over the fire, too. My sister and I loved it so much, we did it again the following Christmas. Eventually, we weren’t quite so poor. The two-dollar AnP hotdogs became Nathan’s, then Sabrett’s, then butcher Bratwursts. The beans went to BnM, then eventually fancy gourmet shit. But, my sister and I are now adults with our own families, and even on years where we’re not together, our entire family has hot dogs and beans on Christmas Eve.” – KyussSun

“My uncle always hosts Christmas at his house since family comes from all over and he has beds for everyone to stay over. On his property is about a 150-foot diameter pond. Every Christmas morning, we wake up and build a giant bonfire to get ready for the impending shock we will feel later on around noon. We also try to get a decent drunk blanket going. Come noon on Christmas Day, we do the Polar Plunge to rid ourselves of last year’s crap and look forward to next year. We huddle around this bonfire while my Grandpa passes around shots to help warm up because that pond is fucking freezing!”– reddiciyoulous

“The tradition in our house was whatever you got for Christmas, you had to wear to the pub at lunchtime on Christmas Day. I’ve been to the pub in PJs, four pairs of socks, a running vest and shorts, etc.” – SpeedyGoneGarbage

“Each year for Christmas, instead of writing our real names on the presents, my parents would take a random theme and assign my siblings and I a name based on said theme (for example this year’s theme is liquor and the names are ‘Scotch,’ ‘Whiskey,’ and ‘Gin’), and we have to guess who is what name. Whoever guesses correctly gets a little homemade Christmas themed ‘trophy’ called the ‘Christmas Smart-Ass Award’ that they can keep until next Christmas.” – TakeMe2Texas

“A tradition we had when I was a child, and one I’ll be continuing with my children when I have them, is the Christmas Eve box. For Christmas Eve, we were given one gift early, and it was a box with Christmas pajamas, a mug, hot chocolate mix, popcorn, and a Christmas movie. We would get to open it around lunchtime, and we’d spend the rest of the evening in our new jammies having cocoa and [watching] movies together.” – Mrs_carroll

“On Christmas Eve, we’re each given a present early. It’s always pajamas and once everyone has opened their present, the Pajama Races begin. Everyone runs to their respective rooms and puts on their pajamas, then races back to the tree. There is no prize for the winner except bragging rights.”

“Then there is a final present that has been wrapped multiple times with a ton of tape. We all stand around the kitchen table and attempt to unwrap it one at a time except you have to put on mittens and a Santa hat before attempting to unwrap it. The person to your left is rolling dice, and if they get doubles, then you stop trying to unwrap it and pass the mittens and hat to them so they can try. This game becomes very loud and fast so you need to keep on your toes. It keeps going around in a circle until someone is successful. The gift is always a board/card/dice game, and we play the game until it’s time to go to bed. My siblings and I are all grown now, but we’ll probably continue to play this with our parents until we have spouses to bring home…then make them play as well.” – legalizeskooma

“We hide a Christmas Spider in our tree and on Christmas morning, the kids get to look for the spider. Who ever finds it gets to open the spider’s gift (usually it’s something they can share).” – Yerlany