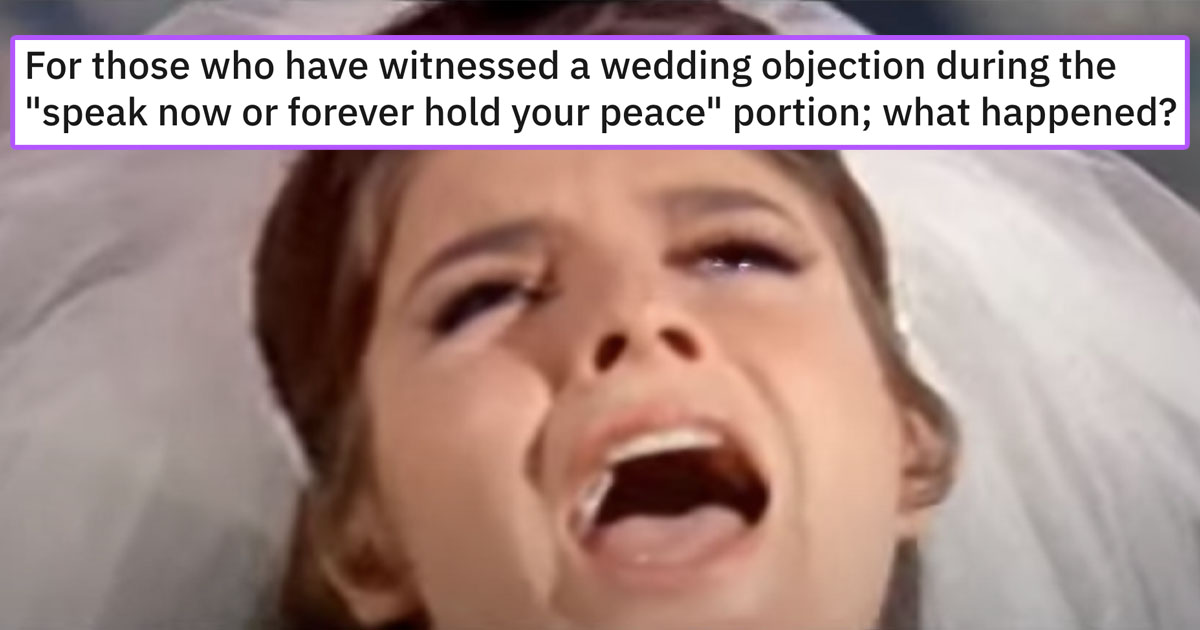 We all know and love weddings as an excuse to get dressed up, get a little tipsy, and maybe meet someone at least for that evening. Right? Pretty chill!

But they CAN be remarkably stressful– you know that part where the priest says, “Speak now or forever hold your peace?” WELL. Y’all. Sometimes people speak now. Redditor u/_AhappyTeddyBear asked Reddit,

“For those who have witnessed a wedding objection during the “speak now or forever hold your peace” portion, what happened?”

Mom got married to my stepdad, Uncle objected… After the attention was focused on him, he just asked if they were still going fishing afterwards.

To which my stepdad reached into his suit and pulled out his fishing hat.

Very sweet and bromantic. They loved to fish together. Rip though 😪 Remind me to upload the video. Wish I could find a cheap way to digitize the vhs to upload it online.

I was working at a wedding when I was younger. I was running the bar at the reception, which was very close to the hall the weddings were at.
We were told that the reception would begin around 4pm. It was already about 3ish and I was packing fridges, the usual bar man things, while one of the male guests was still sitting there drinking.
I asked if he was not joining the reception, to which he replied something along the lines of “when I have the courage”.
He downs his drink, and leaves. 10 minutes later he’s back, looking extremely disappointed. Guy orders a drink, and less than 30 seconds later another guy who’s dressed extremely well (turned out to be the groom), walks in, punches him in the back of the head, and leaves.
This dude just picked his drink up and sipped it further.

I eventually found out that this dude, had downed his drink, walked into the receptions down admitted to sleeping with the wife on her hen night, and again the night before the wedding. He was never invited to the wedding, he just felt the groom needed to know. So he found out where the wedding was, suited up and dropped the info mid-ceremony.

This was in the early 70s in semi rural Washington state. My cousin was getting married, and my aunt and the mother of the groom did not get along well. During the ceremony, when the pastor got to the part about objecting, my aunt said something to my uncle and the groom’s mom jumped up and grabbed my aunt and they started going at it, all the way out the door and into the parking area. They were separated, and everyone filed back into the barn, where the wedding continued. The best part though was when another one of my cousins simply walked into the woods after the wedding because that’s where he lived.

My aunt was getting married to her second husband, and during the “speak now or forever hold your peace” bit, their baby started crying.

The dude officiating it said “If anyone older than six months has any objections, speak now or forever hold your peace”

He got a laugh and the wedding carried on. They’re still together 10 years later, so I guess whatever my cousin had to say was misinformed

The best man at my step sisters wedding did this. It happened at the rehearsal the night before. It was a very large wedding and the rehearsal was bigger than a lot of weddings. The minister was going over the vows quickly while giving instruction on what to do. When he said something about objections the best man interrupted saying he had to put a stop to this. He was in love with the bride and was sure she felt the same way. My sister and everyone else was horrified. It caused plenty of chaos and confusion. As far as I know after that neither the bride nor groom ever spoke to him again.

To be fair, I didn’t witness this, but it happened to my parents.

My mom invited an ex she was still rather close with to her wedding and he stood up and yelled “I object!!”

Little did everyone at the wedding know, my dad had gotten rather close with him and paid him to stand up and object just for the shits and giggles and he bursts out laughing.

My mom didn’t find it as funny and it really started their marriage off on the right foot.

It was a medieval themed wedding. The best man declared his love for the bride. Challenged the groom to a fight for her love. They march outside draw swords and go at it. Apparently they choreographed 2 nights a week for like 6 months but it honestly looked like they were trying to kill each other. The groom wins and everything goes on like normal 0_o weird but cool.

I attended a wedding as a guest of a family member and when thr pastor said that the doors busted open to the sanctuary and a man appeared and started to say “I do!” but two huge ushers, one who was my date quickly grabbed the guy before he could say anything but “uhhh” under the arms and literally lifted him up off the floor and carried him out. The wedding continued as normal.

Turned out the guy was the ex of the bride. Strangest sight I ever saw.

At my cousin’s wedding when the exchanging of vows took place, my aunt shouted “Wasn’t there supposed to be a part where you could object?”, or something along those lines.

Grooms dad interrupted the wedding to ask the bride’s father whether or not she was truly a virgin. Then he went on about how he didn’t know anything of the wedding and blah blah blah. Truly weird and embarrassing. I was there with an ex boyfriend

At my own wedding. But not in the traditional way. We were getting married along a river at the end of summer and tons of wake boarders and boats were out. I was a ball of nerves and the ceremony felt so serious… when all of a sudden some dude bro on a boat blasting music screamed “Don’t do it bro!!” And sped off.

It was actually hilarious and made the rest of the ceremony a lot more fun. My husband and I cracked up even though his brothers looked like they were about to jump in the river after the guy!

Witnessed this a few months ago. Random guest stood up and proceeded to basicly declare his love for the bride and pour his heart out, saying that it shouldve been him up on the alter that day. Whole room went dead silent. Bride went red with embarrassment and groom went red with anger. Best man promptly called for DJ/MC to start playing music.

I was best man at a wedding and the grooms older sister decided to play a joke and stood up and said “I object” then started giggling. Grooms mother stood up slapped her told her is was not an appropriate joke and told her to go home. This mother still refuses to talk to her daughter 4 years later.

I saw it nearly happen at my uncles wedding a friend of theirs got too drunk, and when say said speak now he smiled, started to standup. My mother grabbed him by his hair and sat him back down by force.

Went to a co-workers wedding and the maid of honor objected and admitted to being the other woman and that the groom had been cheating with her for months. The bride left in tears and the groom immediately tried to get with the MoH, but she told him she wasn’t gonna hurt the bride further and that he needs to fuck off. The bride is doing much better and is now a manager here, and I haven’t heard from the groom in over a year. The MoH and bride are on speaking terms, but I don’t think their relationship is gonna ever be what it used to be.

It was at my wedding that we had at my grandmother’s house who lives out in the country next to a cattle farm. The cows didnt make a peep till that moments and one finally went “moo” We all laughed and continued but it was a funny moment about my wedding.

A wedding I was at, one guy got up and pledged his undying love for the bride, followed by four or five others objecting for various reasons including one guy’s love for the groom. By the second or third objection, though, it was clear that the whole thing was a clever ruse. I found out later that it was all set up by the bride as a prank on the unsuspecting groom and family and friends. It was pretty hilarious!

The father of the bride had been pretty absentee after her parents divorce. He had re-married and gotten into the Christian Science religion and they were both pretty terrible. The new wife was not invited to my friends wedding but the father came and it seemed like he was there to be supportive. He stood up during vows and proclaimed my friend was ‘a bitch just like her mother’ and the groom ‘ should get out while he can because my friend was a soul leeching succubus’

The ceremony being interrupted because the woman the groom was seeing on the side appearred with their baby. Yes…their secret love baby and the groom explaining that poligamy is natural and we should be more open minded.