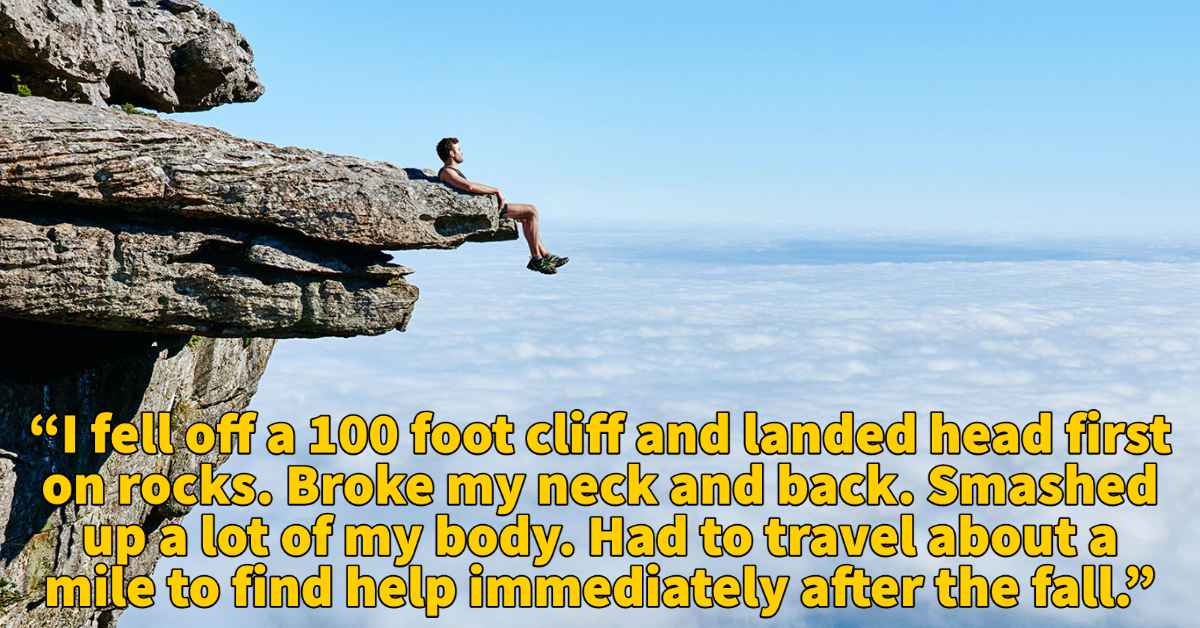 We’re all good at something, right?

Or if we’re just totally average, maybe there’s something weird or interesting about our physical makeup. Maybe you’ve beat the odds in some form or another or have an unusual job that not many people have.

On Reddit, over 52K people folks have joined in sharing the thing that puts them in the 1%.

Triumphing over illnesses, being the champion at a video game, surviving multiple helicopter accidents, giving yourself an orgasm when you turn your head…stuff we can celebrate. Or stuff that makes life a little more difficult.

“If I shake my head in a certain way, I can give myself an orgasm. Never met anyone who can do that.” — KindlyOlPornographer

“Survived flesh eating bacteria in the bloodstream after sepsis. Most people die within 3 days.” — skyth2k1

“I am one of only 1300 board certified Sexual Assault Nurse Examiners for the adult and adolescent population. In the world.” — eziern

“I’m naturally ambidextrous. Apparently that’s something only 1% of people naturally are. I can use both right and left hands ably for any task. For example, I often switch which hand I write with based on how I’m sitting.” — Stormaen

“I’m one of the .002% of people with osteopoikilosis. This freaked the sh*t out of me because when I was diagnosed the first thing the doctor said was ‘wow I’ve never seen this in anything but textbooks before.'” — IgDailystapler

“I am diagnosed with Visual Snow Syndrome. Basically seeing through static. It may not be rare as thought but I am one of very few people to be formally diagnosed.” — condensemilks

“I have a double gene mutation that makes me highly resistant or even immune to the HIV virus.” — Som12H8

“I have AB- bloodtype. Less than 1% of the worlds population have it.” — littleppdp

10. No Immunity To Rubella

“Not as interesting or cool as others but I’m in the 1% of the population that has no immunity to Rubella even though I’ve been vaccinated for it several time. Apparently some peoples bodies don’t take to some vaccinations. Fine with everything else like mumps measels etc its just the rubella.” — totallythrownawaay

“So apparently my left eye is 32mm. The average size is 21-27mm. My eye doctor said it was neat.” — sumtinfunny

13. Fell Off A Cliff And Lived

“I fell off a 100 foot cliff and landed head first on rocks. Broke my neck and back. Smashed up a lot of my body. Had to travel about a mile to find help immediately after the fall. Doctor said I caused more damage by trying to walk for help, but would have bled out if I stayed where I fell. 15 months later, I am power lifting and ran a half marathon. Should not be alive, much less be able to walk.” — Rauglothgor

“I’m a totally in the 0.2% of something. People who have a rather nasty reaction to the blood thinner, Heparin. Lost half my toes because of how lucky I am.” — Snoo_87426

“I’m one of only ~200 deaf pilots in the world and one of only four (that are commonly known of) in the world with Commercial & Instrument training. I’m also one of the only deaf people who hold both a pilots license and a commercial drivers license.” — deafaviator

“Guitar Hero. I was a world ranked player back when it was more popular and won every tournament I ever attended.” — New_Xander

“I’m one of around 1% of people directly related to Swedens great king Gustav Vasa, still living. I’m one of 100k people.” — s3thgecko

“I’ve been in 2 helicopter crashes and 1 plane crash. There is only a small group of people who have survived that many crashes. I’m also not a pilot.” — No1uNo_Nakana

“I was born in and live in Finland.” — JustAKidInReddit

“I had pancreatic cancer last year. Out of 10,000 patients they normally find 100 who have another form of this cancer who kill a little slower, like in 2 years instead of months. I was one of the hundred. Out of those, normally 15 can have surgery. I was one of them. Out of those 15, some die and some come back to basically normal life. That’s about a 0.07% chance in all. I am still one of them. I should be dead by now.” — WillingnessSouthern4