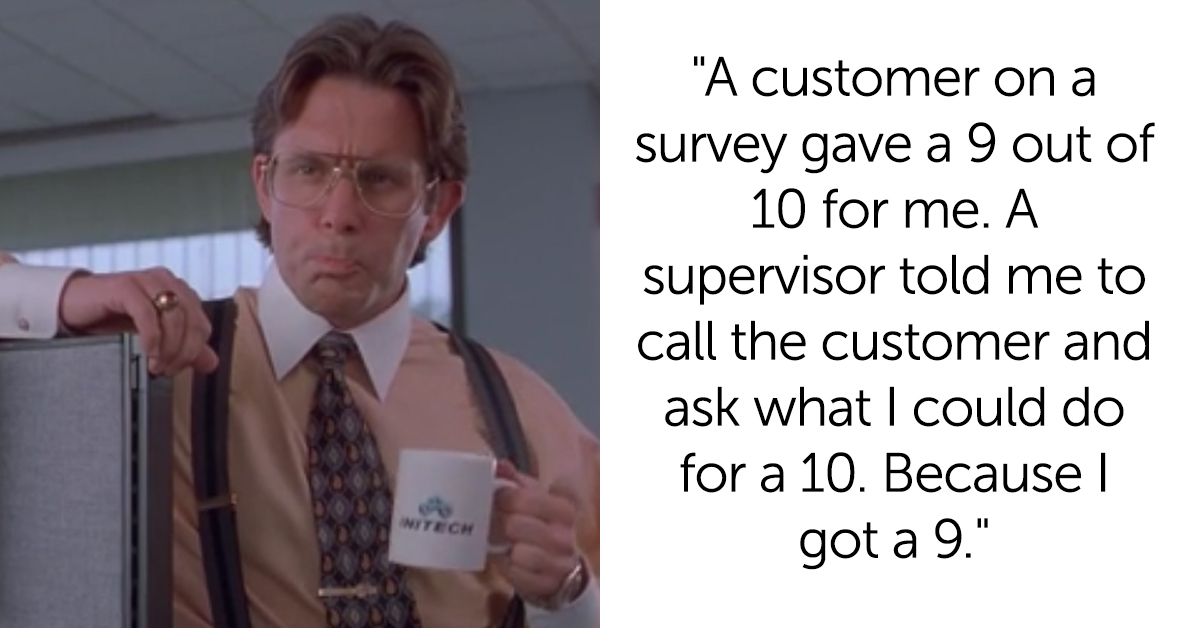 It is 2022 and you would think that people would have the common decency to treat each other kindly, especially when one person is in a position of power over another. But here we are, another day another article about terrible bosses, and I’m so bummed by the whole thing.

Over in the Anti-Work subreddit, u/Disastrous-Use-2373 asked, “What’s the worst thing your boss has said to you?“

I was working front desk at a small, family owned Chiropractic office. It was early morning, patients hadn’t started coming in yet. I laid my phone on the desk (inside a folder or something) and start scrolling. Boss (Chiropractor) walks in.

I wasn’t fast enough in closing the folder. So he pulls up a chair next to me, and says firmly

I just sat there as he went on about no phones. I was making about $400 a week. That wasn’t enough to even cover rent so I had to door dash on my lunch break to make extra money.

Manager called a store meeting to discuss how sick calls were costing us big time. Said, “everyone one who calls out costs our store $10,000 a day in lost sales.” My man straight up told everyone how valuable their labor was to the company, in stark contrast with how much we actually made per day.

Boss told me she didn’t know what happened but that I was not the same person from the previous year. She wanted that happy, cheerful person back. She knew what happened. She was at my father’s funeral two months before.

A customer on a survey gave a 9 out of 10 for me. A supervisor told me to call the customer and ask what I could do for a 10. Because I got a 9.

I was working on a devapps team for a major ISP and we were told to finish work on a project by the day after Thanksgiving. We ended up working till midnight the day before Thanksgiving, all day OF Thanksgiving, and all night to midnight. Basically it was 44 of 48 hours on our desk, heads down coding and testing.

The next Monday they announced the sale of the new software package to another company for 4.2 million dollars.

All three of us turned in our resignations that day.

My grandfather was in the hospital and was notified by my mom through text that he signed a DNR, this was on a Thursday I was a cook at the time.

I told my manager what I was told and that I need the next day off (would make it a 3 day weekend to go up and visit him in the hospital which is 9 hours away).

She told me no that she has nobody to cover my shift (I’m currently cooking dinner rush while talking to her) I told her that this is my last time I could possibly see him and she goes on how her brother died in the hospital and she still came into work because that’s what she had to do and that life sucks sometimes, you just have to get over it, while I’m still cooking during rush she says “so what’s it gonna be?” In a threatening tone and I say “well I guess I can’t go if nobody can cover me” she then said she’s sorry about what’s going on and thanked me for not missing the next day.

Next day comes and my shift starts and my phone is literally exploding in my pocket, I’m at the hospital with my kids and wife with my grandfather, my manager is losing it “where are you!?” “Please let me know if you’re running late!”

I sent a reply “Remember when you said you have nobody to cover my shift? Well you’re covering my shift tonig

“Geez, how many more aunts are left to go?” His words to me whenever I told him I couldn’t come in for a full day due to a funeral. This was my third family member to pass away in less than a year so idk that shit hurt to hear.

Was re-hanging clothing with my Store ASM standing right next to me, doing another z rack. Guest comes up and hands me what she didn’t want, asks ASM if she’s the manager, ASM says yes, obviously bracing for a complaint of some sort. Guest gushes about how I am friendly, knowledgeable, treated her wonderfully, found exactly what she needed, and that I deserve a raise.

ASM pointblank : “She makes too much already.”

Worked for a small, understaffed eye clinic with only 3 staff and the dr (we were down to 2 staff and the dr when I quit). We worked our assess off and kept it running… 6 months in the Dr finally gets around to doing my 90 day performance review. For 30 minutes she proceeds to point out all of my flaws,how she doesn’t really like me and thinks I’m not doing good at my job. How sometimes when she walks in the room I have my back to her and a bunch of other stupid expectations she had that I was never told about..

When in reality I was doing the job of 2-3 people and keeping up with it. My patients loved me and I never had a single complaint from any patient or my coworkers.

I interviewed for the same position at a different clinic and when I mentioned i quit due to only having a staff of 2-3 people. He literally blurted out “How the hell does an office run like that?!”. Now I have 11 coworkers and I do 1/3 of the work for more money and get treated with respect. It’s amazing.

I used to work at Walmart and they were rolling out these new scanners that were basically large Android smartphones with barcode scanners built into them. Anyway I normally worked in the back unloading trucks, but this particular day, I was sent out to the toys department to stock. I used the scanners to locate where items are supposed to go since I didn’t really stock any departments besides grocery and wasn’t too familiar with the layout. A customer comes up to me and asks for help looking for something. I don’t remember what it was off hand. The customer was nice, thanked me for my help, so on. About 20 minutes later, the store manager comes up to me and asks me to follow him to the office. After he closed the door, he told me that lady had complained that I was “using my cellphone on the floor” and he started chewing me out over it. I explained that it was the scanner, not my phone. He said “I believe you. They do resemble phones, but I still have to coach you” (Walmart’s term for write up). I asked why, and he said “well, customer complained and I have to follow up”. So basically I got wrote up for doing my job. I was a good worker, barely called off the 4 years I worked there, and that was my first write up. After that incident, I noticed a huge difference in how I was treated by other managers. I didn’t work there much longer

This was during a team meeting regarding dissatisfaction at the shitty 1% salary increase we received. Again. After CEO promised we’d be rewarded for perseverance and high productivity during lockdown and layoffs.

Boss: ‘You know, all of us are struggling with inflation and rising costs…. I’m not taking my Range Rover out as much and have a four bedroom house I’m selling!’

I will never own property unless I meet someone, coworker is putting off having kids and other coworker cares for an elderly relative by taking a part time job on top of this one.

One of my bosses once was walking around the studio and responded to something someone said with “you guys work for me, so I own you.”

District Manager: ‘Why haven’t you been hitting your sale targets?”

Me: ‘Sorry, I’ve been tired and distracted, I just found out the other day my mum has breast cancer.’

District Manager: ‘Well everyone has things going on in their lives.”

14. Anyone could do this job

I worked for a startup for 3.5 years. Started as an intern and worked my way up to production manager. When it came time to decide my salary, I sat down with the then COO to discuss pay. When I asked for a compensation that was fair and the average for my city, he said to me that it was too high for my role and that they could “find anyone fresh out of college or off the street” to do my job. I was floored.

Fast forward to months later when the company started laying off people and folding, I resigned because I could no longer do my job as a manager since the companies I was managing haven’t been paid by us. They begged me to come and teach them all of my processes, forms, and documentation I had set up because they didn’t know how to do my job. I simply told them “you don’t need me for that, you can find anyone right off the street to teach you.” Ahh, sweet bliss.

Not as dire as some replies here, but my first review at my job, my manager was praising my performance. He then followed up that, “regrettably, promotions and raises are not based on performance.”

8 years ago early 20s I was a receptionist at a hair salon and the owner / main stylist was my boss and he would make fun of me every day. He even gave me a haircut on my second week and it was purposefully a bowl cut and I was so broke and insecure I pretended everything was fine. I caught him laughing at me more than once.

One day he looked at me, scoffed and said “My socks cost more than your shirt.”

He fired me exactly the day before my third month and I cried I was so happy.

Felt ashamed to quit as I was raised never to quit but I have learned there’s no shame in demanding you deserve better.

Manager asked rudely why I was limping and not wearing my non slip shoes. I had sprained my ankle badly (doctor said they were surprised it wasn’t broken due to how big the swelling was) and told him that I couldn’t wear my usual shoes because my foot wouldn’t fit.

My boss came up to me and saw i was on my phone when the store was dead he said “I cant make exceptions for you, we are not friends and the rules apply to everyone”
I said i agreed, and it was fine.
Then i called HR and told them about the $50 he took from the safe and used to buy an amazon gift card as well as a screenshot of the reciept, he was fired 18 hours later.

I was a week into a new job when my best friend’s mom was put into hospice. I warned my boss that I would be attending a funeral probably within the next couple weeks. On the Thursday morning of my 2nd week (before Memorial Day weekend) she passed away. I was in tears when I went to my boss to let her know. Her first comment, “Let’s hope the funeral is on the weekend.” It was the Tuesday after Memorial Day & I took the entire day off. Quit 2 months later.

“You don’t pay my bills, your patients pay my bills.” Then the patients in turn list their source of income and so on and so forth and we have a billpayception.