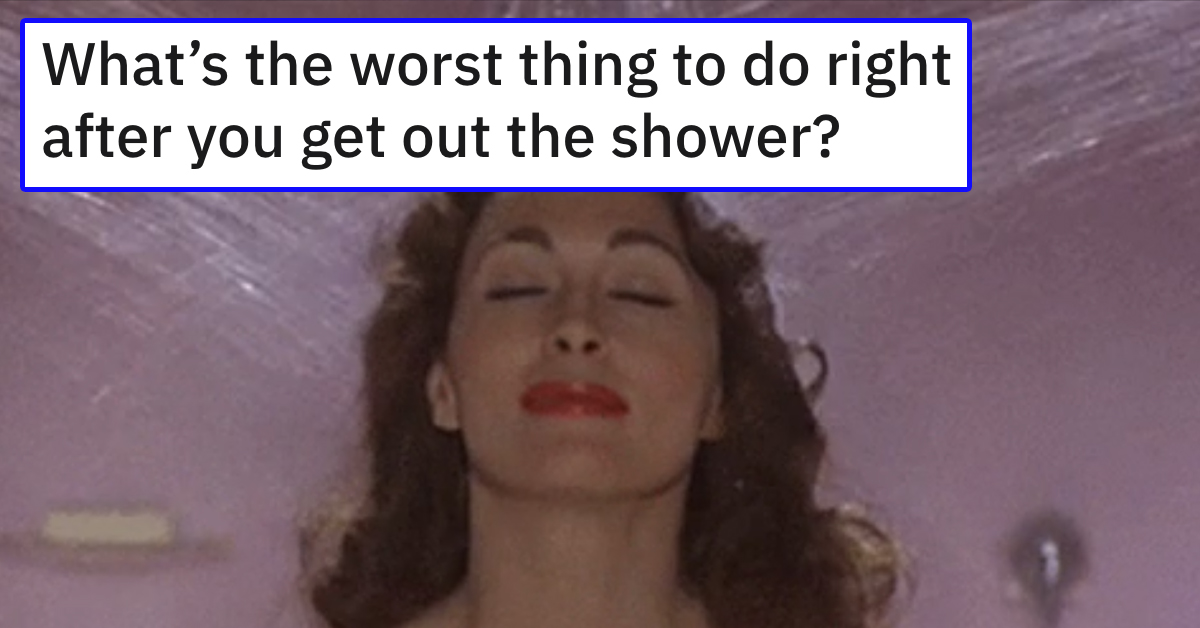 There’s nothing like an amazing shower after a long day, or a great one to get the day started. But sometimes, you end up losing those feel-good effects by doing something you probably shouldn’t do.

In a recent Reddit thread, people are answering the question:

“What’s the worst thing to do right after you get out the shower?”

Some offered answers that were silly and hilarious, but then things took a dangerous turn for others. People are pretty passionate about not pooping immediately after a shower. You’ll probably always want to avoid slipping and falling, and a few other things.

Here are 20 things you definitely shouldn’t do after getting out of the shower, according to Redditors.

Put your socks on.

Walk out of your apartment right when your neighbor from the story above you empties their vacuum contents. Wtf. That goes in the trash, not to the wind.

Realizing you don’t have a towel.

Slip while straddling the tub edge to get out, and crushing your nuts.

Trying to put a sports bra on while still slightly damp. OMG THE WORST.

Trip and hitting your head on the sink wake up several hours later in a daze with your cat on your back grooming itself.

Slip on the tile catching the back of your skull on the sharp edge of the shower door knocking yourself out and bleeding all over the fucking place when the only one home is your 8 year old kid who gets alarmed at he loud thud and finds you naked, unconscious and laying in a pool of your own blood.

Do something that makes you sweat.

Slip and crack your head open on the sink then fall face first in the toilet that you haven’t flushed yet.

Blow dry your hair on hot.

Sit naked in a towel for an hour while scrolling through Reddit.

Walk barefoot over a floor coated in kitty litter.

Punch a child in the throat. You should at least dry off and get dressed first.

If it’s a morning shower then the worst thing to do is go back to bed!

Putting pants on. Dry yourself first.