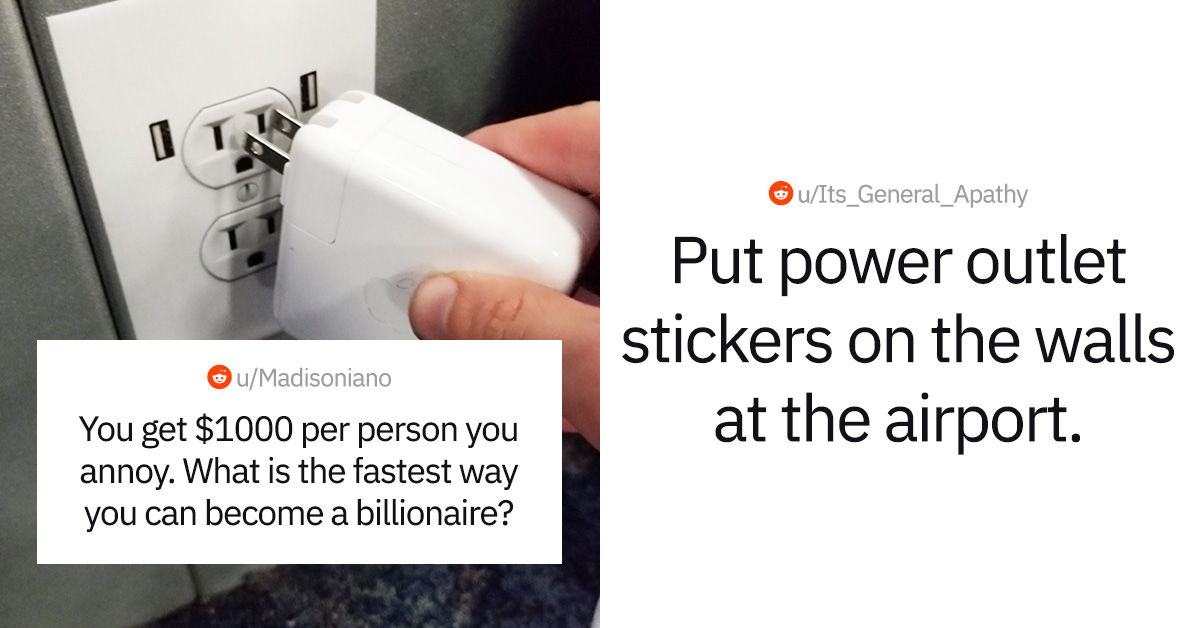 Wouldn’t it be nice if it were easy to make a billion dollars?

This entertaining AskReddit Thread has people discussing what would be the fastest way to become a billionaire if you got $1,000 per person you annoy.

The prompt has people coming up with some creative ways to get rich quickly. Here are some of the best ideas people shared.

You get $1000 per person you annoy. What is the fastest way you can become a billionaire? — u/Madisoniano

I can’t say that the advice “just be yourself” has always worked out well for me, but this sounds like it might be the exception. — BaldandersSmash

Make a DIY video on painting your car with house paint and someone is next to me telling me how amazing it’s looking. — ProvocativeHotTakes

Be the dude at the airport terminal telling people they gotta do another loop, and can’t wait there for people coming off their plane. I’d probably only have to do a half day at LaGuardia… — gangsta-grillz

Lots of beautifully annoying ideas in the comments, but nearly all of them are underestimating how hard it is to annoy a million people. As a software developer, the closest I got to reaching that kind of audience was when I worked at a big game studio on a heavily marketed AAA title.

So this is what I’d do: on one and only one menu in the game, I would invert what the A and B buttons do (or O/X on PS). While players would rely on muscle memory to back out of menus using B and confirm selection using A, in that one menu, pressing B would confirm, and pressing A would back out. — riscten

Start arguing with everyone on Reddit Edit: Y’all heard me, bitch — Scarlett137

Take out a bunch of TV and radio ads endorsing both Trump and Biden simultaneously using Gilbert Gottfried sound bites as the narration. — Clcooper423

People here are thinking too small. Cause a significant delay in the start of a big game – Super Bowl, World Series, Stanley Cup, etc. Everyone there and the millions watching at home will be annoyed. Boom. Instant billionaire. — notapunk

Take a loan, buy an ad spot at the Superbowl, and say bud light sucks. I’ll be a billionaire within minutes. — torqtea

Put power outlet stickers on the walls at the airport. — Its_General_Apathy

Become the host of a popular talk show. You thought Corden was bad? Just wait. — VanderlyleNovember

Close off all but one lane on 95, right through the middle of DC, at 2 pm this Friday. — keenedge422

Go to quiet, kid-free areas with my 3 energetic, young children after a night of bad sleep and sugar — Mission_Asparagus12

Hello, I am calling about your car’s extended warranty… — Murky-Fun2592

hack google and make it so everyone has to reset their password. no matter what password they use for the new one it will give the error stating this is their current password. it will only reset properly after the 3rd attempt — The420Turtle