Being in a relationship is like 20 percent chemistry and 80 percent negotiation. It’s a lot of work to make everyone happy and feel like you’re on the same page. But some stuff you can’t compromise on, as this story from u/ThrowRA1287 on r/AmItheA**hole shows.

The OP says she’s been dating her boyfriend since January, and what with COVID-19 and all, they ended up living together. That sound like a disaster waiting to happen to me, but it ended up working out. She says it’s been great. They have a lovely routine and home life. But one day when her boyfriend was reading posts from Reddit to her, he saw a post in which a guy was challenged to an arm-wrestling competition by his girlfriend. The man in the story had no training but his girlfriend did. This sparked a disagreement:

I commented he might have a surprise. My BF started educating me on biology and how men are stronger than women. I told him there were way too many factors to take into consideration to make such a broad comment. I have been doing weightlifting for 2 years and my BF has never seen a gym in his life, so I used us as an example. That was a BIG mistake.

He got really defensive and condescending, and made comments like “That’s cute.” I just let it go.

Then, awhile later, the OP overheard her boyfriend playing an online game with a friend. Eavesdropping, she overheard some stuff she didn’t like, always a danger when listening in:

At first it’s all pretty and my ego is bursting, but then he says I’m delusional because I think I’m stronger than him. Pause. “Seriously? I know I’m weak but not weaker than a girl.” So later, I decide to call him on his BS. I asked him if he wanted to come workout with me the next day (this morning) so he can show me how strong he is. He accepted and I was happy because I had been dying to bring him and initiate him to something I’m passionate about.

The OP has been working out in her friend’s garage, which is permitted in her region if it’s fewer than ten people. They started working on deadlifts. Her friend was there because it’s something they do together every Sunday since the pandemic. She says it’s one of her favorite exercises and she’d been planning to test her personal best that weekend.

We started light and slowly worked our way up, doing the same number of reps as the other. Comes 185, his form starts to crumble so we made him go lighter. But 185 really isn’t that much for me so I kept stacking the plates. He looked very supportive and impressed the whole time. I ended up beating my personal best at 265. I was ecstatic and so were they.

When we got in the car, he was very silent. I assumed he was just tired. We got home and that’s when he exploded and asked me if I was proud of myself. Apparently, I humiliated him in front of my friend. I apologized. I didnt realize he was feeling that way. He got angry and said it really changed the way he saw me, like I’m less of a woman now. He stormed to the basement.

I started collecting my things, but now I’m wondering if I should have been reading between the lines and stopped at 190 or something. Or just dropped it and never suggested we workout together? I knew very well I was stronger than him but I just had to prove it to him. AITA?

Wow. What an a**hole! And so sad that the OP felt like she should have to hide how good she was at something to placate him. That’s pretty much what every comment said, too: 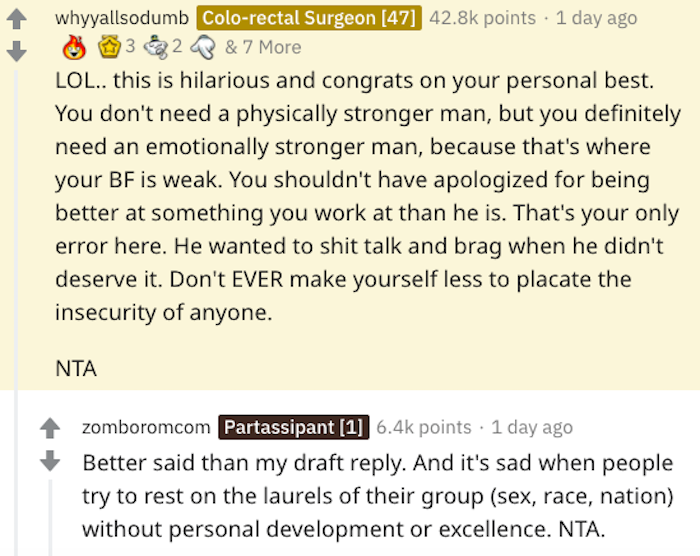 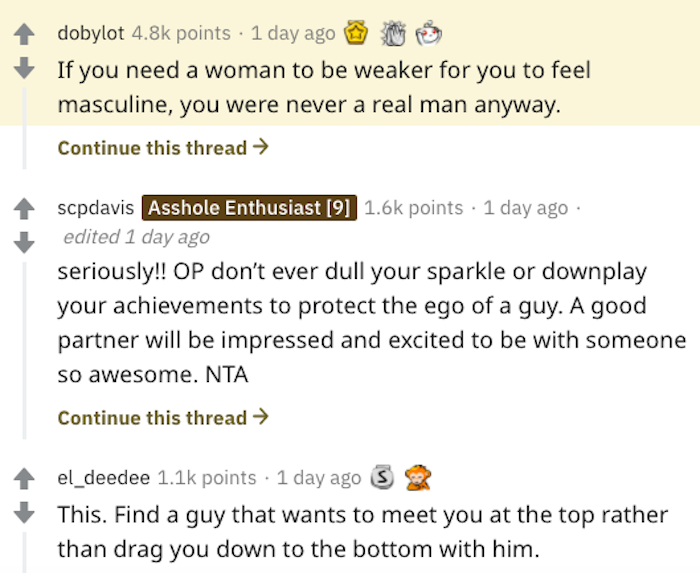 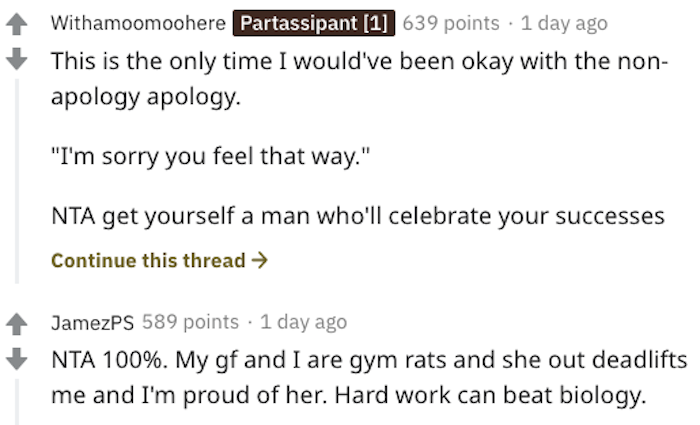 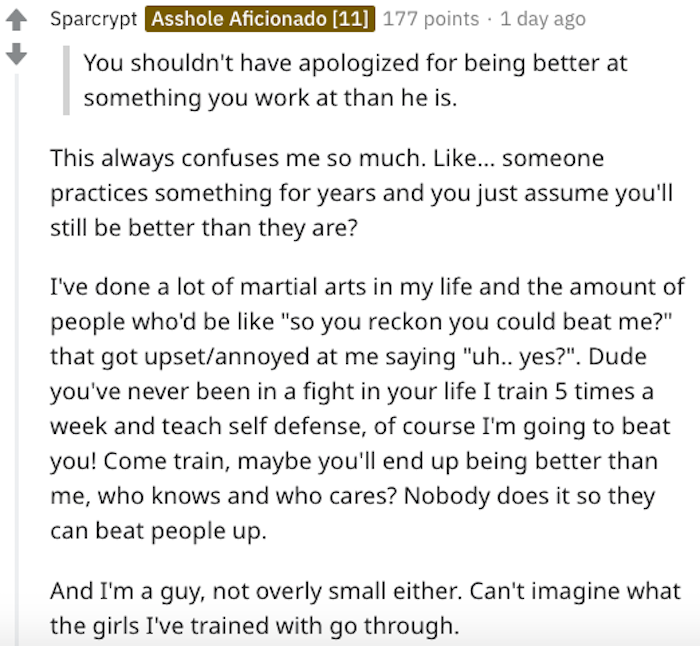 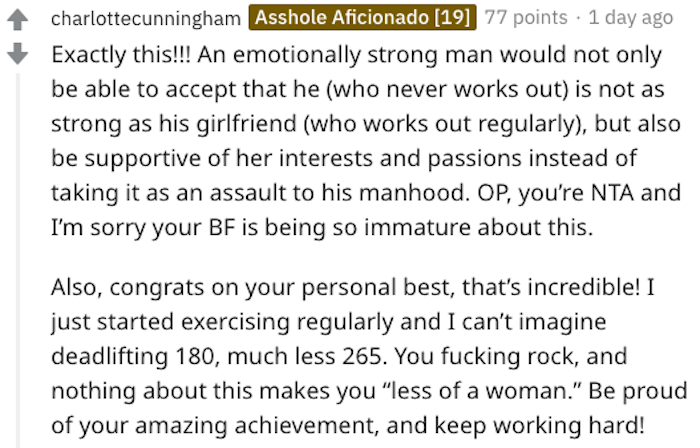 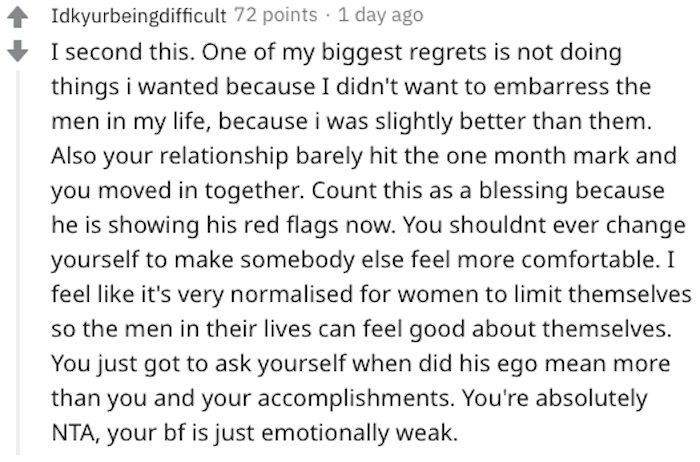 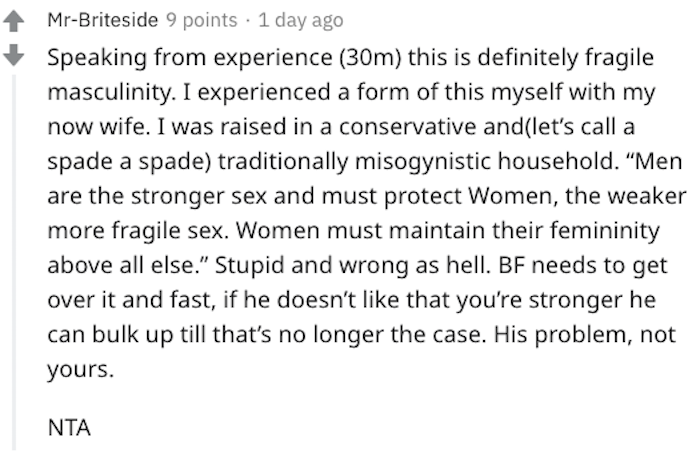 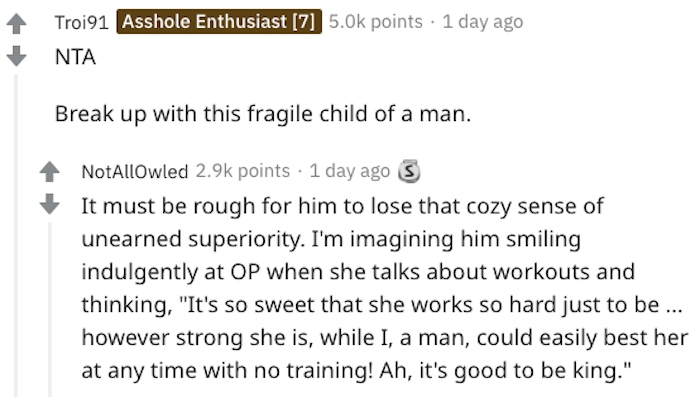 In her original post, the OP added an update, writing she still hasn’t heard from him. “Thank you for the overwhelming response,” she said. “That was a bit of a rollercoaster day but it made it easier to know I’m not completely in the wrong.”

She also commented elsewhere that seeing so many supportive comments made her wonder why she had even considered pretending to lift less than she was capable of lifting to appease his feelings: 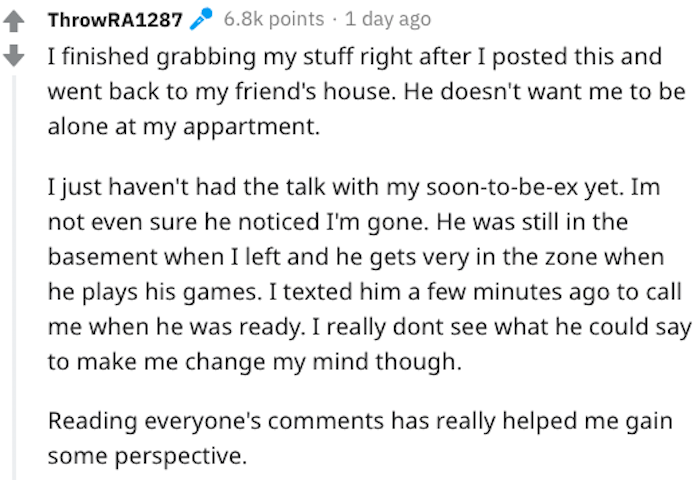 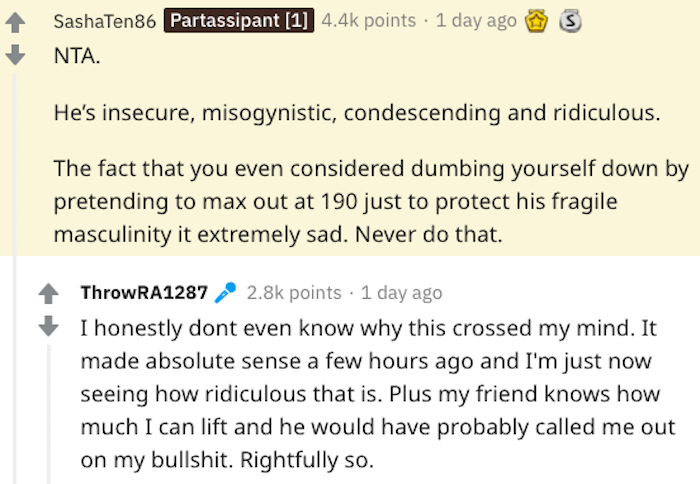 We all deserve someone who celebrates our accomplishments, instead of seeing them as their own defeats.