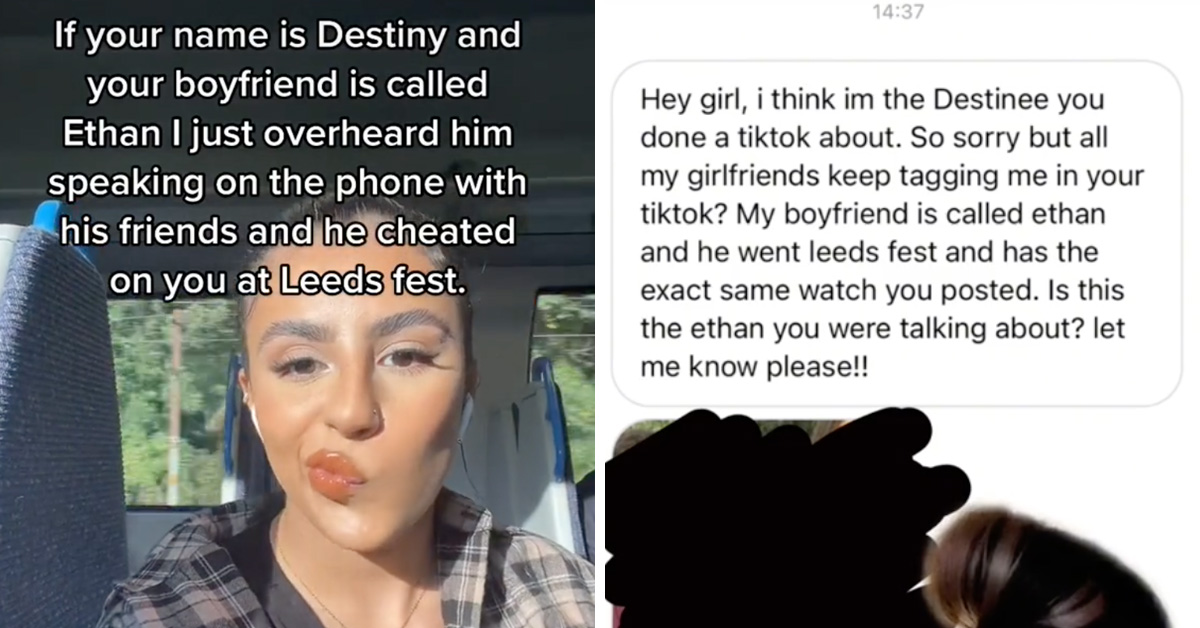 Helen Fielding once wrote that women can be divided into two categories: those who are on the Girls’ Team, and Undercover B*tches. Women on the Girls’ Team, as you might expect, have a sense of solidarity and try to help out other women and femmes, in a world that is so often hostile to us.

Undercover B*tches are pretty much the character foil for Girls’ Team players: they take themselves very seriously, have narcissistic tendencies, and try to cut other women down to make themselves look good (the better to get more attention for themselves, of course).

If we stay with Fielding’s worldview for a moment, it’s easy to see that a young lady Nisrin from TikTok was Girls’ Team Captain this week.

While on the train, Nisrin overheard a young man named Ethan bragging on the phone to his friend that he’d cheated on his girlfriend, Destiny, at Leeds Fest.

Because Ethan read aloud some of Destiny’s text messages, in which Destiny called him by name, Nisrin was able to ascertain both of their names, as well as get a sneaky reverse-photo-bomb shot of Ethan’s wristwatch.

And, like any solid member of the Girls’ Team would do, Nisrin set about trying to reach Destiny.

Destiny’s friends eventually saw it and began tagging her.

The one drawback in all of this, though, is that there wasn’t only one Destiny who thought the video might be about her.

In a follow-up video, @itsnisrin showed a screenshot of a DM sent to her from THE Destiny (who apparently goes by Destinee):

In a third and final update, Nisrin explains that she and Destiny spoke on the phone, exchanged photos of the offending Ethan, and came to the conclusion that her boyfriend had indeed cheated on her. According to Destiny, she could even pinpoint which exact night the infidelity must have taken place.

And, adding hilarity to the brouhaha, Ethan himself reached out to scold and vaguely threaten Nisrin—so she posted that, too.

Notably, Nisrin didn’t specifically relay that the two had broken up. But since they’d only been dating for two weeks and Ethan already couldn’t stay honest OR keep it in his pants at a concert..

We can only hope Destiny realized life has better things in store for her, and sent him packing. Girls’ Team: 1, Ethan: 0.