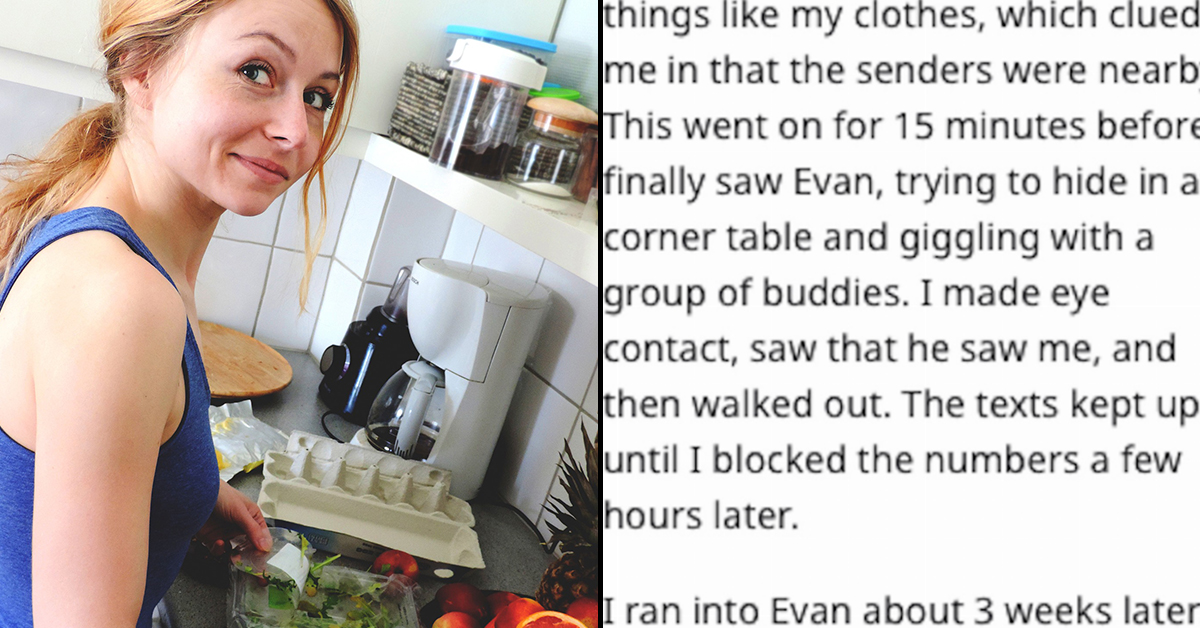 We all love a story in which a fat-shamer gets roasted, so huddle up kids, and listen to this one.

Shared on Reddit by self-described “f*cking fat” and “not ashamed” user donotf*ckwithfatty, the tale is titled “Sometimes the customer is wrong for unrelated reasons.”

“About a year ago I met ‘Evan’ via Tinder. We exchanged friendly messages for a few hours one night and agreed to meet up for drinks the following evening,” she writes.

“I waited for a full hour past the designated time, and just as I was getting up to leave, the texts started rolling in. ‘I can see you sweating from here.’ ‘How long does it take you to roll out of bed every morning?’ ‘Is there an earthquake or are you just getting up for more pretzels?’ Really idiotic, juvenile sh*t. Four separate numbers, commenting on things like my clothes, which clued me in that the senders were nearby. This went on for 15 minutes before I finally saw Evan, trying to hide in at a corner table and giggling with a group of buddies.”

She ran into Evan three weeks later in an elevator and confronted him.

“He admitted it was just some ‘game’ that him and his friends play. He knew I was fat before agreeing to meet up; they all did, because that’s what they do. Match up with fat women, then either ghost them or ‘troll’ them at the meet-up.”

“It was also kinda obvious he’d never seen any consequences from this bullsh*t,” she added.

Expecting never to see Evan again, OP went about her business, which includes owning and running a popular restaurant. Guess what happens next?

Evan comes in for dinner on Valentine’s Day with a date. Guess what happens after that?

“I checked the section up at the hostess stand and saw that one of my favorite old-timers, Nan, was going to be his waitress. I went to the bar till, took out $400, put it in her hands, and said, ‘This is going to be your only table for the rest of the night. You are going to make this the worst date he has ever been on,'” she writes.

Some of the things Evan endured while on this date? Nan poured ice water on his d*ck. She hit him with the back of the tray “by accident.”

She spilled soup on his shirt. She dropped the forks. OP made sure his drinks had the worst liquor and his food was oversalted. Eventually, Evan asked to see the manager.

“I was only too happy to emerge from the kitchen with my chef’s coat and say what, I’m not ashamed to admit, I’d been planning out all night: ‘I would have said hi earlier, but I didn’t want the earthquake to disturb your dinner.'”

“I will savor the look on Evan’s face for the rest of my life,” she says.

Then, OP told Evan’s date about the fat-shaming she endured from him and his friends and gave her a voucher for a free meal.

The kicker? “He deleted his Tinder profile.” Magnifique.