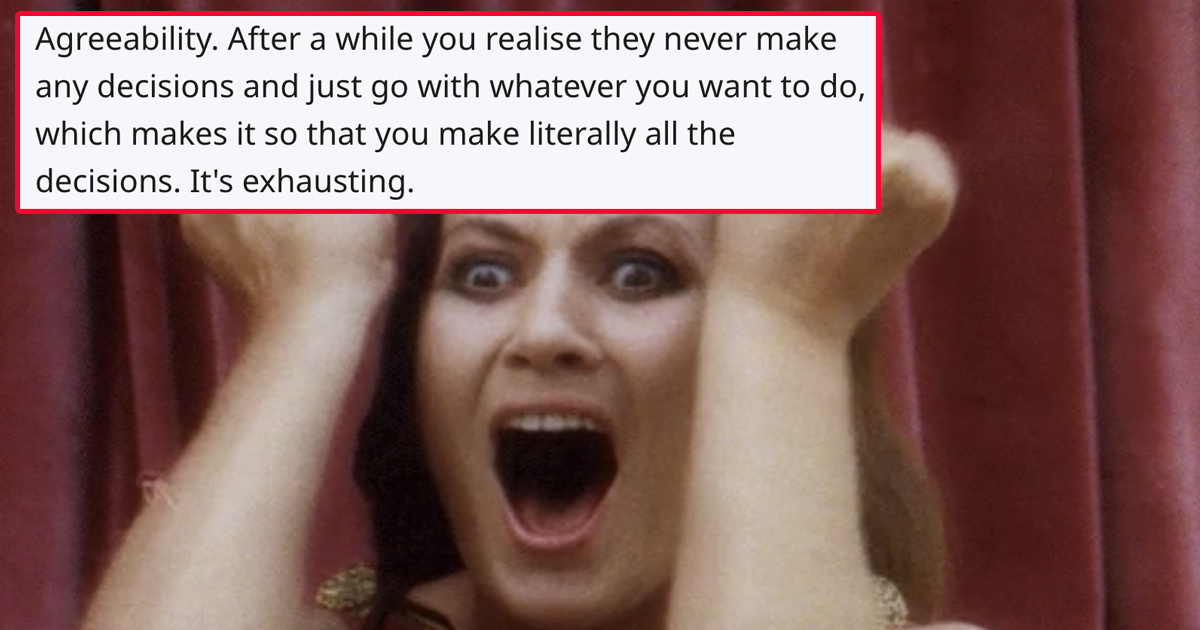 It is so hard to know just what will or will not become a huge issue when you’re starting to date someone and pinpointing the problem before it’s a problem seems nigh impossible.

That’s just what u/NTSTwitch wondered about when they asked the women of Reddit, “What seemingly harmless personality traits ended up turning out to be a dealbreaker in your relationships?”

I’ll be honest: this thread kind of broke my heart a little. Scroll through; maybe you’ll spot some things in your own SO that could be worth a chat.

After a while you realise they never make any decisions and just go with whatever you want to do, which makes it so that you make literally all the decisions. It’s exhausting.

Always funny. It’s fine to be funny, but it becomes a problem when the person prioritizes being funny over being kind. They’ll say something critical or sarcastic and try to hide behind “humor.” Or, “being funny” is such a big part of their identity that they will prioritize that over every else. I wish in my younger days I had prioritized kindness over being funny in men.

3. Bad to everyone else

He was always sweet and adoring towards me while a complete monster to anyone/everyone on the outside… lol it’s not that he has a soft spot for you!! It only lasts so long before they switch up on you too.

Passiveness. Turns out they were passive about everything including what they wanted for their future, career, money, etc. There wasn’t one thing in their life that they desired for themselves

I used to think they were generous people with kind hearts, but over time I learned not to trust them because they’re not true to themselves and are very resentful people due to their inability to say how they really feel. They do nice things to “get” you to like them, not because they actually want to. I don’t like that.

Him being a social butterfly. Turns out he was always seeing who he could reel in for later and had more back burners than a restaurant.

Nobody wants to fight all the time, but an inability to have a disagreement without shutting down completely is not sustainable in an adult relationship. It only builds resentment.

seemed like no big deal, he was able to provide, he did well in life. But that lack of quality conversation was just so boring

At first it felt like fun banter, but after a few years it was exhausting how he ALWAYS had to be right. Couldn’t even have minor disagreements like who the actor in a movie was without it becoming a whole thing, never mind if I we actually needed to discuss something serious.

His focus on mental health. He ended up blaming me for all his mental health problems (I was not the cause) even though it turned out he was the one cheating

Being concientious with money. When every gift turns jnto a debate about how much it Cost …

Always being the loudest. Like needing to Always be right and have the last word. At a point it becomes a bickering match and I’m not here for it. This is for friendships too

Any self proclaimed ’empath’. It turns into ‘look how much I’m hurting because of your pain’

Having a “laid back look on life. After a while, it becomes clear this person don’t have any goals or desires in life. It gets boring and i start losing my respect for our relationship.

There’s a limit to kindness I can take. I have been learning not to people please but my husband still does because he wants to be kind. I love how kind he is (one of the reasons I married him) but he picks the worst people to be kind too and even when I tell him it’s a bad idea he feels he has to do it anyways. Which has left us short on money and time a few times. Today it lead to us being short a microwave.

He was petrified to address anything that even remotely bothered him in our relationship. Which seemed like a good thing at first – we never fought. What actually ended up happening is me assuming everything was great for the last 6 months of our relationship, and he had this growing hate/resentment towards me.

I had a friend that was very invested/dedicated. At first, I thought this was a good personality trait, but it ended up being suffocating. She would constantly refer to me as her “best friend” even though she wasn’t mine. She made very territorial social media posts about how I was her “best friend in the entire world.” If I hung out with other friends, that she didn’t even know, she would get annoyed that she wasn’t invited. If I wanted to spend my free time alone, with my husband, with other people, etc. she would take it personally and make comments about it. She was jealous with the amount of time I hung out with my husband and said it “wasn’t fair” and that I “treated her differently” than I treat him (obviously).

Knowledgeable. I loved it at first but he grew to be condescending. My friends hated him for it cuz he’d always initiate arguments. “Never let the truth get in the way of a good story” is something I learned. He ended up being a huge liar.