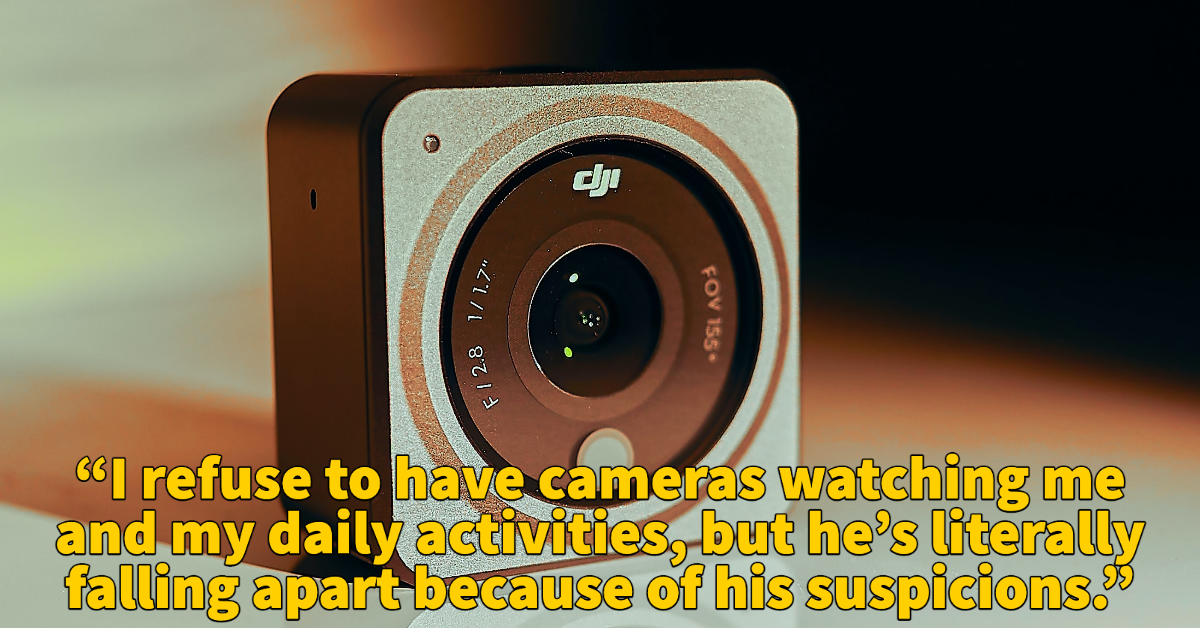 When there isn’t trust in a relationship, it’s time to work on the root of the issue — not stick cameras all over your house to catch your significant other cheating on you. Unfortunately, one wife on Reddit is trying to figure out how to get her marriage back on track when all her husband wants to do is spy on her.

The OP said that her husband is worried that she is sleeping with an acquaintance even though she isn’t — and that nothing will give him peace of mind except surveillance.

But obviously, it never stops at cameras — and it shouldn’t ever get to that point to begin with.

“We have had problems for the past few months and got separated for a period but we’re back together now and thought we had things under control again. He woke me up 5 am the other day asking me if I’m sleeping with a certain acquaintance of ours. This acquaintance is a friend of my sister’s and she tried to fix me with him during the time my husband and I were separated. I was never interested. I love my husband and even if we were to get a divorce, it will take me a long time to get over him and start dating again,” said the OP.

“My husband was in a state that morning. After many long talks he said he believed and trusted me. But today he asked me about installing cameras around the place. ‘If nothing else, for my own peace of mind’ was his argument. I refused.”

“Am I in the wrong here? I refuse to have cameras watching me and my daily activities but he’s literally falling apart because of his suspicions. He thinks my refusal means I’m guilty but I believe surveilling me is both humiliating and not going to solve the problem because the problem is in his head. He needs to trust me or move on but he thinks I’m ruining our marriage when it could be fixed with a simple solution. We love each other and we have three small children.”

This couple needs counseling. Cameras are not the answer.

“It won’t help anyway. Once he sees the cameras all showing you not cheating on him…he’ll start thinking about all the ways that you could still be cheating on him anyway,” said

“I had a co-worker who would share with me that her husband thinks she’s cheating on him. He placed goddamn trackers under her car, under the cushion seat of her bicycle, spy cameras almost everywhere in the house, and even got someone to hack into her email accounts for him to access her emails, Google accounts, Facebook/Instagram/Tiktok account, and other things. The guy was retired from the military. She would even tell me that the guy would sometimes visit her co-workers and ask them about what she was doing during the day. So f*cking crazy,” shared

“I think as a first step you should talk with him what you say here. Something like this. ” I did not cheat and I don’t know why she said that to you, we can confront with her why she said because cheating did not happen.” And secondly in my opinion relationships especially marriages work with devotion. Your concerns about indoor cameras are reasonable but maybe you can reason with him with something like ‘I think it’s humiliating to install indoor cameras but while you work on your trust issue, I’m only okay for cameras for outside doors. I’m not okay with this too but i just want to work on our marriage.’ Lastly you have every right to be mad/sad about his trust issues. But as a person with abandonment issues in life i trust my partner with my whole heart but even though I know he’s not going to cheat on me I still can’t fight with my irrational thoughts sometimes. So I understand his part too. Sorry for the no paragraphs I’m on mobile,” suggested

“No trust = no sustainable relationship. Forget the cameras. That’s just a surface wound. Get a couples therapist or use any equivalent. Dig behind the root cause and tackle that. Or acknowledge that it is not worth it and start a healthy retreat for your own happiness and well-being and for giving yourself the life you deserve,” advised