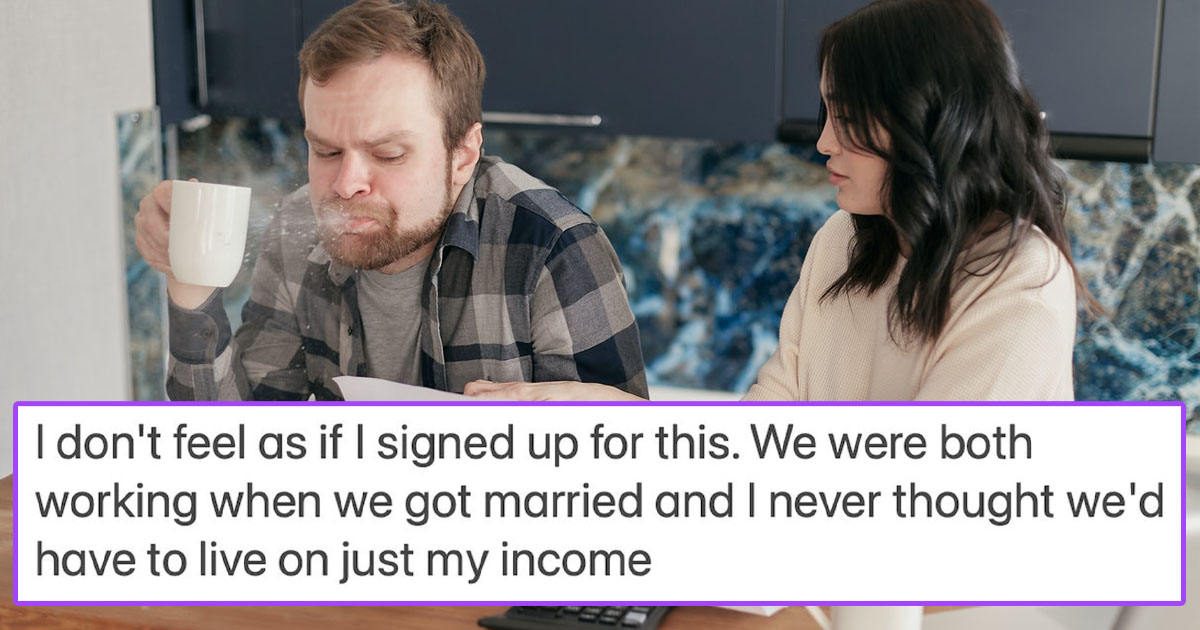 I know, that’s such a click-bait-y title, because honestly: he’s not. He’s not an asshole. The story he tells paints SUCH a different picture than the title, but it’s tough to give a succinct portrait of what’s going on here.

Here’s what he posted over on the subreddit, r/AmITheAssh*le:

When we got married we both had jobs. However maybe about a year after we were married my wife tearfully confessed to me that she was miserable at her job and wanted to quit. She told me that her boss was treating her like garbage and that she woke up every morning wanting to vomit. She legitimately seemed dejected and so I told her to quit and to find another job where she would be treated better.

She quit. I expected her to go out and start looking for something else but she didn’t seem too eager. Whenever I gently brought it up she responded “I’m just trying to figure out my next move. Stop pressuring me.” Not long after she got pregnant with our son, and then while he was still very young she got pregnant with our daughter. A few months after she was born when I asked my wife what her plans were job-wise she finally just said “I don’t want to go back to work. You make enough for us to get by. Just let me be a wife and mother.” I told her that I was concerned that I *don’t* actually make enough to give our family as good of a life as I’d like but she insisted that we can make it work.

I have to admit; she’s probably a model homemaker and mom. When I wake up for work in the morning there is always freshly brewed coffee and breakfast waiting for me. The house is always clean and other than yardwork and repairs I basically don’t have to do anything around the house. And she is a great mother to our kids. I am quite lucky in many ways.

However, money is WAY tighter than I’d like. We are barely saving anything and I’m not even able to meet my employer’s match on my 401K in order to have enough for us to get by. We are living lean; eating beans and rice for dinner a couple times a week, etc. I don’t feel as if I signed up for this. We were both working when we got married and I never thought we’d have to live on just my income. I’ve tried to talk to her about going back to work–even part time–to help our financial situation several times but she just won’t hear it.

Recently when I was going through our expenses I saw that we were signed up for five streaming services. I kept Hulu and Netflix because they had more child-based programming for our son and our daughter when she gets a little older but cancelled HBO and Discovery Plus because they are pretty exclusively for adults. I kept Shudder because it’s cheap and I like horror. When I told my wife about it she got angry and said that I should have talked to her first; that she had shows she was watching on both of the services I’d cancelled. I just responded “Well, get a job and you can pay for them then.”

She hated that. I think it was fair but she obviously doesn’t see it that way. AITA?

So as I read through that, I thought — eeeenh. He probably could’ve been a bit more mature about the whole thing and communicated better, but he doesn’t seem like a straight-up dick.

I think the problem here is less about the actual streaming services, tho I do get it’s a dick move, but about the actual money and OP’s resentment that his wife is not willing to help contribute to the house finances. He doesn’t seem to understand that what she does is a lot of work and makes her happy, but she also doesn’t seem to understand how tight money is. His built up resentment spilled out over the fact that his wife was unhappy that he cancelled some streaming services because she doesn’t financially contribute.

I’ll spare you the LAUGHABLY long discussion about whether rice & beans is an adequate diet for two growing kids.

Here’s a rare ESH — most people agreed this dude wasn’t an asshole.

Most people agreed: OP and his spouse need to talk.

In closing, you guys need to talk. Talk lots, talk long, talk honestly. Use empathy and whatever insights you can provide to come up with a shared vision of the future. Or else your marriage is probably doomed to be unhappy at best.

So what do you think? Asshole or naw?