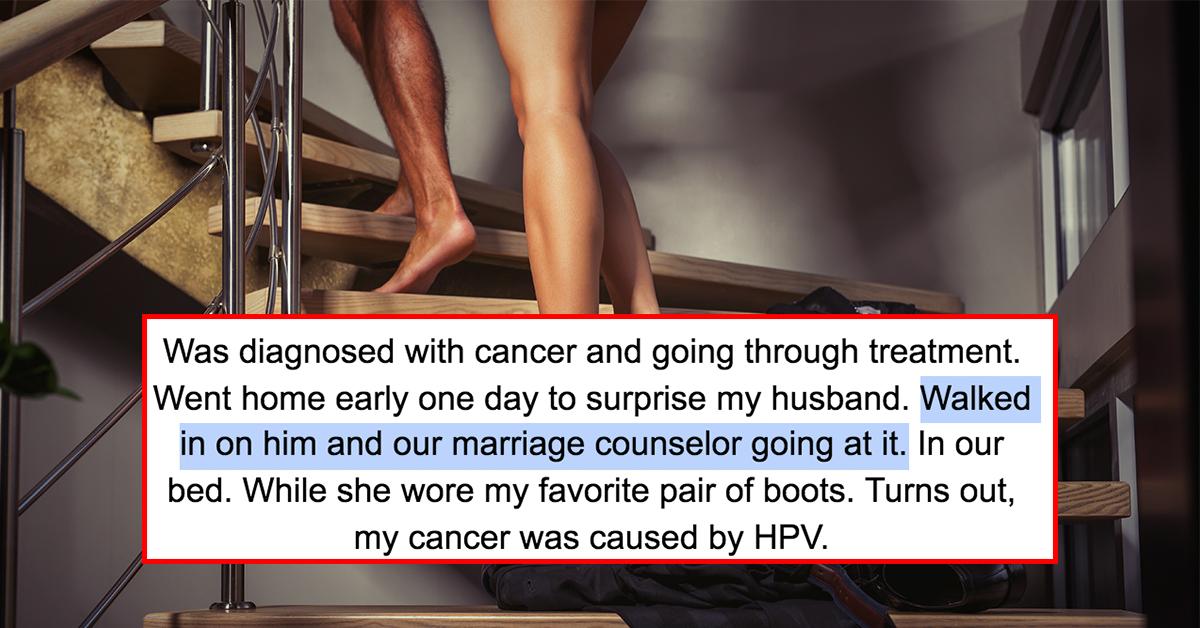 Not every relationship is meant to last forever.

Some people come into your life to teach you valuable lessons—like, read the red flags.

While some people are strong enough to walk away from people they no longer love, others are too coward to say goodbye and instead, cheat—regardless of how much pain they know they will cause their partners.

Finding out your partner is cheating on you is probably the hardest pill to swallow. Recently, BuzzFeed asked their users to share the ways they found out about their cheating SO’s and—they’ll make you never want to date again.

The girl he was messing around with came forward. It was the worst. This was after I had already confronted him about another girl he was cheating on me with. He was a dick. –sarahg44f760348

I mean, he was talking to my best friend and they seemed in their own little world talking which I didn’t think twice about because we were sat in and group and then I look over and they were full on making out as if they forgot I was right next to them. I was like “?????? Hello???????” –maryj42b55b693

I was on a job interview in Houston. When I got home my 2 step-sons and I had a bondingdate. During the day the littlest one was hugging me and I told him how much I loved him. He turned around and said that Jenna loved him and his brother bunches as well. When I asked who this person was he proceeded to tell me while I was gone she came to my home and spent the entire time there sleeping with their dad and holding a party with our friends. Needless to say, I called my in-laws told them the situation and turns out they knew about her. So I packed up they showed up I left with my clothes and a few personal items and filed for divorce the next day. –samantham4162a72e5

I pulled up to my house after spending a night at my moms house after a fight with my now ex. I saw a strange car in the driveway. I stormed in and saw a pair of men’s shoes on the landing. I walked into my bedroom and they wereasleep in each other’s arms in our bed. And that’s how I found out my husband had a boyfriend. I threw the shoes at them and chased the boyfriend out of my house in his underwear. I moved out a week later and never looked back!! –tonig14

My now ex-boyfriend was throwing me a birthday party at his place. I couldn’t find him when I got there so I decided to look around. He was on the couch MAKING OUT with another girl. He looked at me and tried to play it cool. What’s worse is that one of his friends was like, “oh have you met his girlfriend? She’s really cool.” I left immediately. He texted me for the next couple days and kept apologizing, but it was too late for me. –germsortiz

He planned a trip before we had started dating, to go and visit his sister. When the date came around, I dropped him off at the airport and took care of his dog for the week. I got a message on Instagram from a girl I didn’t know, providing screenshot proof that he had been planning on seeing her during his trip, and had been sleeping with her the whole time. When I called to confront him, he had the nerve to call her crazy and denied it!! Until I read the screenshots to him. –hayleyr4ce138a6f

My whole life I’ve had a terrible habit of, when I get annoyed with people, I say something pretty extreme to get a reaction (I’ve gotten better). When I was 23 I had been dating my college boyfriend so it was a bit long distance. He canceled weekend plans last minute so I said “it’s cause you’re cheating on me with your coworker.” He got annoyed, said he’ll see me in a couple hours and came. Turns out, I was right, and he drove 2 hours to find out how I knew. –courtneya8

I was looking through my 5 year old daughters photos on her tablet and saw the nudes of another girl and screenshots of snaps and text messages (not to me). When I confronted my husband about it I was the one who got called “psycho.” –aliviar483ed01e3

I answered his ringing phone after he came home blind drunk and passed out on the couch. She was surprised as he had told her we wereseparated. I was about 2 weeks away from giving birth at the time. –Sharimg

He went binge drinking, called me after he sobered up and told me he couldn’t come home until the hickies cleared up. –acourterille

We were at a mutual friends house hanging out with her and her boyfriend. He fell asleep and I heard his phone go off, I knew he’d been waiting for a text from his mom to ask her if he could stay in town another day so I checked it. It ended up being a text from a contact named “baby” saying “I know you’re cheating on me”. So I scrolled through their messages, it wasn’t just sex they had a while relationship where they would say they loved eachother. I got her number and texted her from my phone and explained the situation. They’d been dating a couple months (him and I had been together for a year) turns out the cheating she had been referring too was about another girl. There was 4 of us. All of our contact name were just different pet names “babygirl” “babe” “baby” and “cutie” –amynottage02

We were only together for a couple months, but I was getting gas one day when I saw him in the car with a girl that had come up in conversation a couple times. I had his location, but I texted him to ask what he was up to and he lied. Anyway, his roommate ended up showing me condoms in his room, and when I confronted him, he admitted it and apologized profusely. The next day, i called him and she answered the phone then he grabbed it from her and had the nerve to insinuate I’m stalking him and trying to ruin his relationship with her! Bonus: a month or so later, she cheated on him, stole some of his money and just overall fucked him over so karma is a bitch I guess. –hosannay

found a bloody pad in the garbage, wasn’t on my period and in fact i find it disgusting that he would have cheated on me with someone who’s on their period and am g l a d he’s gone. –jayapike

He forgot his phone at home when he left for work one morning. I opened up his phone and there it was. He’d been communicating with two ugly girls for two months. When I confronted him about it, he said it wasn’t cheating because he never touched them even though he sent dick pics and they reciprocated. That’s still cheating. – hannahrosep46c525402

I was with this a*hole of a guy, who on paper it look like the perfect gentleman, open the doors for me, texting me the whole time, taking me to beach days. One day after we went for a friend wedding one of the bridesmaid I met a week before she DM me on fb telling me this guy text her to go out with her, she told him he was an idiot and said no, when confront him he just told me mmm yeah and that was it. A month later another girl DM me on fb cursing me and telling me to get away from her bf, I talked with her and explaining what happened and I haven’t talked with him over a month,then she told me that she got his cellphone and it wasn’t just me who he was going out, there were 3 other women he was hooking up. I can’t still understand how he managed the time. –edithmolinal

I heard him bragging on the phone about it. TO HIS MOM! –moniquee13

this was in high school, and my bf and I had been together for a few months when this happened… we were watching tv and an ad for Indian Jones came on. I had mentioned I’d never seen any of them and he goes “oh yes you have! that was the movie that was on a couple weeks ago!” I insisted I didn’t remember and he starting going into details about what was going on during the movie (hint hint) trying to help me remember. I guess my face gave it away because he stopped mid sentence to say “oh shit… that wasn’t you…” –lindseyd42277ce55

Surprised my ex by throwing a house party to celebrate his recent job promotion. Probably 80 of our friends were there. Drink after drink the night went on. Everything was going great until I couldn’t find my ex. Went downstairs to investigate and walked in on a 3 some between my ex boyfriend and my two best friends. Stood in the door way shocked, went upstairs and downed a bottle of vodka before leaving and never speaking to any of them again. Let’s just say my trust issues have never been the same. –Justine Mkayla

We shared a bank account that i was only keeping afloat at the time to help support him through his new job/move to Philadelphia. I woke up one morning to an alert that 120 dollars was spent from our- better yet MY Chase account! I automatically go to check the IG page of this girl I noticed he recently started following. I see on her page that she had a date night at the place Chase said the card was used. I call him and blow up. He said he took himself out on my dime bc of stress. Oh word my dude? And you just so happened to jump in on home girl’s stories too?! You the worst kinda herb my dude. You the broke *ss dumb type of loser. Got my money back and deaded his whackness. –colleenw10

I was a year out of high school and my boyfriend at the time was a senior in high school. We made plans to hang out one Saturday, but said he couldn’t because he was asked to go to Prom with some girl that came into his work. When I told him I didn’t think it was ok to go out with another girl while having a girlfriend, he said TO MY FACE, “I’m not a caged animal, It’s not my fault I’m so attractive.” He was so confident in himself that he continued to tell me how he was talking to THREE other girls while still dating me and told me “if I want this relationship to continue, I have to be ok with it”. UM BYE. –K8M517

Was diagnosed with cancer and going through treatment. Went home early one day to surprise my husband. Walked in on him and our marriage counselor going at it. In our bed. While she wore my favorite pair of boots. Turnsout, my cancer was caused by HPV. He’d been cheating on me the entire 10 years we’d been together. –mollycasanovad

We were in high school, and he had just turned 18. I was in the car with him on the way to his house when two cop cars pull up, tell him to get out of the car, and arrest him on the spot. I had no idea what was going on. A few days later I found out he was cheating on me. With a 15 year old. –aspitzzz

He forgot I had him on Instagram and he posted a sonogram of a baby he was having with someone else. –allin18