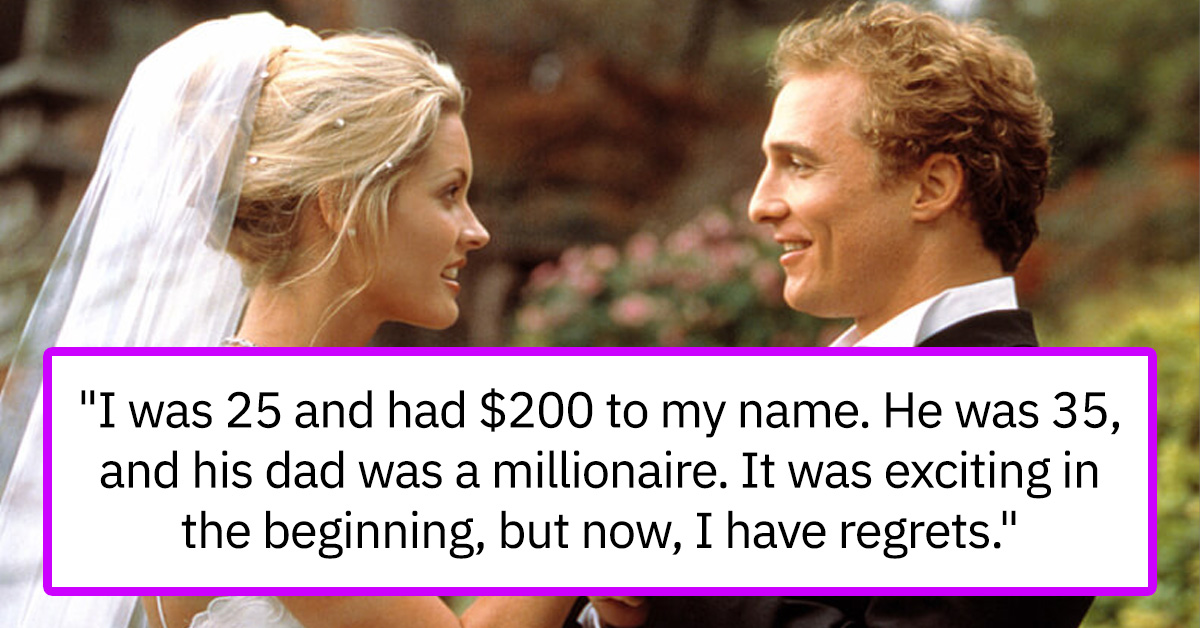 Most people would probably agree that marrying or dating someone solely because they have a lot of money isn’t the best idea. But, nonetheless, people do it, and their stories are eye-opening.

Here’s how people responded to this post when asked to share their own personal stories about marrying for money and the unexpected events that followed.

My cousin married for money at 22. Absolutely, blissfully happy now. She has her hobbies, and he has his work. He’s never expected her to cook or clean. There are lavish gifts and vacations for both of them. They never cheated and never wanted kids.

It’s a literal dream for her, and they’re 11 years strong now.

I was married to two men, both from well-off families. The first lasted months as I discovered some really unsavory things about him. The second was much, much longer, but in the end, I left; he turned out to be a liar and manipulative, and for many years, I thought I could handle it because I not only loved him but knew about this part of him. But no amount of love can sustain a relationship that is tainted with deception.

He is now with a woman who is just as manipulative as him as well as one who uses excuses for her behavior. If he can handle it, fine. He is the kind of person who doesn’t like to be alone, and during our relationship, often commented he didn’t want to die alone. The one thing I can guarantee is even if I am holding your hand, you will die alone. Sad but true.

My mom was the daughter of factory workers and dropped out of med school because she partied a lot and realized she can coast on her looks. Unfortunately, her wealthy boyfriend didn’t want to marry her, and she ended up taking my dad (a surgeon) as the second best choice. She’s a massive narcissist, and their marriage and consequently my childhood were nightmares.

There was constant fighting for more money, more presents, and expensive holidays. I decided early on I want to live my life in a frugal way and focus on something more meaningful.

I didn’t marry for money per se; my husband and I were young, and he didn’t have much of his own money. His family wasn’t RICH, but they were at the top-tier of middle class — which to me felt like they were practically millionaires. One of the first things that attracted me to him was that he was incredibly smart and dedicated, and I knew that he would eventually amount to a lot. We totally weren’t ready for marriage; we were too young, and I knew this going in. We were only together for about six months! I loved him, but I pushed him to propose because I needed the stability in my life.

My family life was always volatile, and we grew up very financially unstable and worried that things would get worse, and often, they did. I wanted better. I love him now more than ever. We have a lovely life, not lavish by any means, but certainly very comfortable. Being supported by him financially and emotionally was what I needed to be able to attend graduate school and build a great career. I am financially secure on my own now, so even if I jumped into marriage for the reason of financial stability, I am staying because of love and mutual admiration. This made me realize that while attraction is visceral, love and support are a choice. We have had rocky times, but we get through it and work on our relationship because for us, it’s worth it. It also helps that he turned out to be an amazing father to our children. I fell in love with him all over again when we became parents.

I had a boss who married a man about 20 years older than her for his money. This woman obviously wasn’t happy at home and would come into the office and take it out on staff. In the summer, they went to Europe for two weeks. Of course, my boss didn’t have to pay a dime because her hubby had it — but she came back with the WORST attitude and was angry at everyone and everything.

If you’re gonna marry for money, marry someone who you would still like to be around if the money disappeared tomorrow.

I got married for money and security, though I didn’t really mind him. So, we get married, he spends all his money on a cult, and now, I’m trapped in a loveless and moneyless marriage.

“I’m too scared of losing everything to leave.

A former coworker of mine married for money. She came from a wealthy family and wanted to marry wealth. Her parents set her up with a matchmaker who specialized in matching wealthy clients. She went on several dates with one of her matches, and they married a year later in a very lavish wedding. On the outside, you’d think they had the perfect life; two kids, huge house, nice cars, etc., but they fought, a lot.

He became very old-fashioned after the kids were born. He expected her to stay home and take care of the domestic side of life, but she was very intelligent and had a good job which she really enjoyed. He wanted a wife from the 1950s whose job was to serve her husband and take care of the kids. She would come into work in tears sometimes as he would shame and bully her for wanting to work. She ended up divorcing him and is now married happily to a plastic surgeon.

I married for money (sort of) twice, and I’m twice divorced.

Five years ago, I married for love; we’ve already lasted longer than the first one, and we’ll likely grow old together. Wealth is overrated, love is underrated.

I married my high school sweetheart a few months after I turned 18 (he was in college by then). His parents were very wealthy business owners and highly respected. Long story short, nothing we ever had was ‘ours.’ It was always his — regardless if my working paid for it or not. He hardly worked, and when my check wouldn’t cover our bills, he would call up mommy and daddy instead of working for it himself.

We divorced eventually. And the icing on the cake…he was cheating the entire time with a mutual friend. They now have a child together but remain unmarried due to her cheating. It was the longest, hardest, and most regretful three years of my life.

I had the chance to marry someone with a lot of money, but I chose not to. Her father was a doctor who went on to start a clinic. He was pretty frugal, so he had amassed quite a large sum of money and properties. He passed away, and through his trust, to avoid taxes, sent a third of the money to the daughter who I was dating. We had a lot of fun together, but she was emotionally a wreck. She was coddled her whole life and wanted a father figure more than a boyfriend and husband. She kept pressuring me to marry her — to the point that she wanted the title of ‘Mrs.’ more than an actual relationship. At that point, I got out of it, and she moved on.

I can’t complain, though, as I met the girl of my dreams right after her, and now, I’m married to my soulmate. So, while the money would have been nice, I would have spent the rest of my life miserable. I wouldn’t change a thing.

My mother didn’t marry for money exactly, but she married for prospects. She was very beautiful, but her family was very poor — like, move out in the middle of the night because you haven’t paid the rent poor. She chose my dad because he was the smartest, hardest-working guy she knew from a very stable working class family — a step up for her.

He did very well and moved them up to upper middle class. No regrets, and they’ve been married over 50 years.

I tried. I swear, I tried. My ex talked nonstop and knew everything there was to know. I loved hanging out on the boat and going to the cottage, but he would not ever shut the f**k up. Although he was very generous, I couldn’t handle it. Never again.

My ex mother-in-law was widowed with two young children, leaving them dirt poor. She got married to a family friend from a very wealthy family a year later. My ex-husband and BIL were privately educated, and they’ve always lived in huge houses. I don’t think the mother-in-law and her husband are in love at all, but that she was under pressure to marry from his family. They get along OK, and they’re OK people. I can’t really blame her for jumping at the arrangement as it’s a good one.

As a parent now, I wouldn’t rule out doing the same in her position if my kids could grow up with that life instead of in poverty. They were able to set us up with a deposit for our first home, which would not have happened from my background.

My sister married a man who was 15 years older than her, and she stated she was only getting married to him for his money. Now, she is pregnant with their second kid, and he is looking after their kids without a job.

A property dispute is going on. As of now, there is no property registered in her or her husband’s name, and she works to pay her bills.

My mom married for money the second time around. She was miserable and nearly had a breakdown. They invested in stocks, and when it crashed, they lost nearly everything. Then, she was stuck with a husband she couldn’t stand.

My cousin married a guy for money, and his family went under after they bankrupted a small town with their criminal banking practices. I still talk to her, but I would have nothing to do with her if we weren’t cousins.”

My husband is an RN at a nursing home, and when he first started working there, there was a really old man with a very young wife. They had met when the wife was his first wife’s hospice nurse. They ended up getting married just months after the first wife died; he was close to 80, and she was in her early 20s. She only married him for his money. She told my husband she never thought he would live as long as he did. He lived to be 107.

She thought he’d live five to six years tops, and then, she’d be set for life (he didn’t have any kids). She was pretty jaded that she’d spent her youth taking care of an increasingly frail man.

My cousin married for money. Her family has always been materialistic and high-strung. Her first husband was 13 years older than her (she was 23 at the time) and lived large. Turns out, everything was on credit cards. Things started getting worse, and eventually, she left him.

Her recent boyfriend she now lives with is a millionaire. He bought our uncle Johnnie Walker Blue Label just for a party and threw in a few hundred bucks for a raffle. He always talks down to her as if, ‘Oh, you just sit there and be pretty.’ So, I assume for her, living the lifestyle she wants is worth the trade-off.