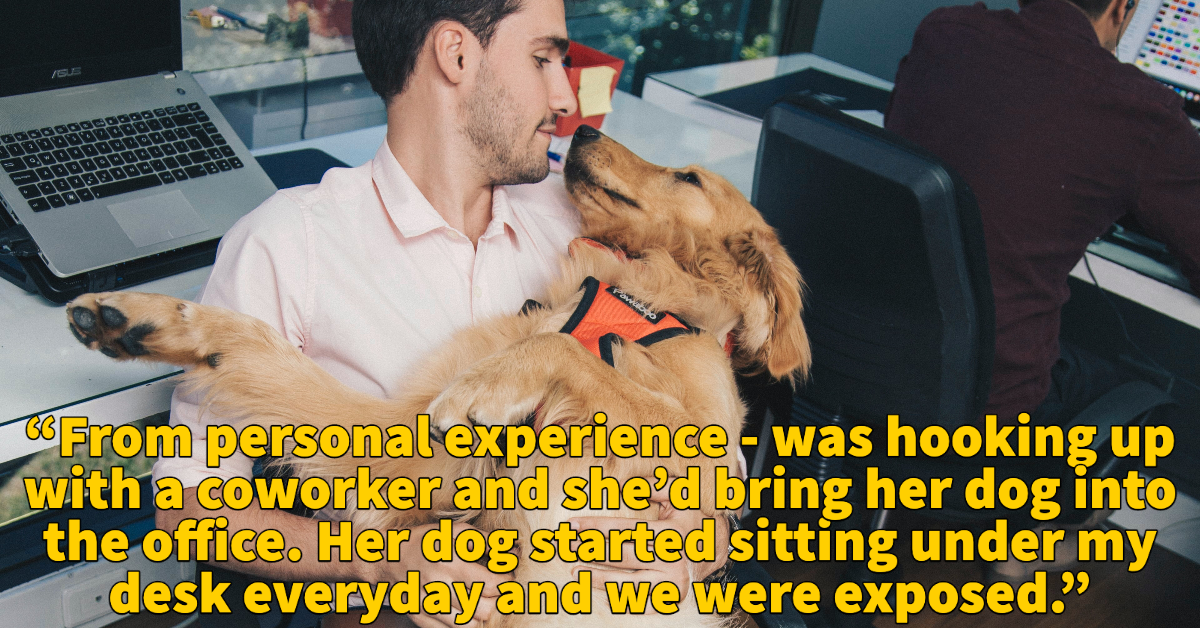 Maybe at your office, workplace relationships are frowned on. But you and your work neighbor are really into each other! So you start hanging out after work — and pretty soon you’re dating. But you can’t let anyone know.

Guess what? People probably already do. After all, we’re all amateur body language experts when it comes to people secretly engaging in a relationship. Look at the signs! On Reddit, people are sharing how they can tell that people are secretly in a sexual relationship. Secrets just cannot be kept.

“It’s definitely the awkward avoidance of one another for no reason. When I was a supervisor two of my employees were secretly dating and being as young as they were (19-20yrs old) they didn’t have the ability to hide their feelings without avoiding each other as if they hated one another. I figured it out on Day 1. Hilariously cute.” —

“When your SO brings someone up way too much in the beginning then mysteriously stops talking about them at all, even when the situation potentially calls for it.” —

“Their orbits are smaller around each other. Without meaning to, they will change their personal space requirements with the other. They’ll think they’re normal distance away, but won’t be. Also, they’ll move around each other too easily (like in small spaces) without the awkward missteps the rest of us make.” —

“As someone who once had a wonderful female work friend who would always try to get the cat hair off my shirt when I came in…I suspect I was missing cues there.” —

“If you know them before it they’ll stop flirting as much as they had been prior to it. They make sure they don’t leave a place together but linger around long enough to know when the other is leaving. They look at each other when something funny or bad happens.” —

“A bunch of us used to hang out on a Teamspeak server to play games. One day we were chatting when the server admin just blurted out: ‘So [guy] and [girl], you two have the same IP address today. You f*cking?'” —

8. Looking At Each Other

“The little conversational clues. Like when two people glance knowingly at each other frequently, or have friendly little side whispers because they have their own thing going on apart from the group. And they hover near each other to be physically close. All those little examples of intimacy that is only between them. A married ex friend of mine once started showing up with a woman and acting like that. I could tell they were banging, and I couldn’t believe he wasn’t trying harder to conceal it. Turns out, the poor woman had no idea he was married, and was unaware that everyone else DID know. It was later traumatizing to her to realize she had been seen as a mistress, when she was the only person who didn’t know what was really happening. She’s now a friend of mine. He is not.” —

“If one person slips and mostly reacts to something funny or distinct to that individual, when the rest of the group isn’t. And they might try to cover or restrain that emotion.” —

“Carpooling when there is not much convenience to it because they don’t live all that close to each other.” —

“Staring. I was secretly seeing a guy in school. As far as everyone else was concerned we couldn’t stand each other. This girl I barely knew pulled me aside and whispered, ‘I don’t know what’s going on between you two but you need to stop staring or everyone else is going to know.’ Later on he wanted to know what the girl said to me. I wasn’t about to admit she noticed my staring, so I said ‘she thinks there’s something going on with us because you keep staring at me!'” —

“The two of them consistently being the last ones left at the group hangout, especially if one of them is hosting.” —

“These two I used to work with, they got found out because a skunk sprayed outside the guys house real bad. The next day they came in to work separately and ignored each other as usual, but they both smelled like skunk. Then everyone knew, but they didn’t know we knew.” —

“From personal experience – was hooking up with a coworker and she’d bring her dog into the office. Her dog started sitting under my desk everyday and we were exposed.” —

“Pay attention to who they look at when they laugh. It may not reveal a sexual relationship necessarily, but it’s such an innocent act that at the very least reveals that they want to ensure they are connected it that moment.” —