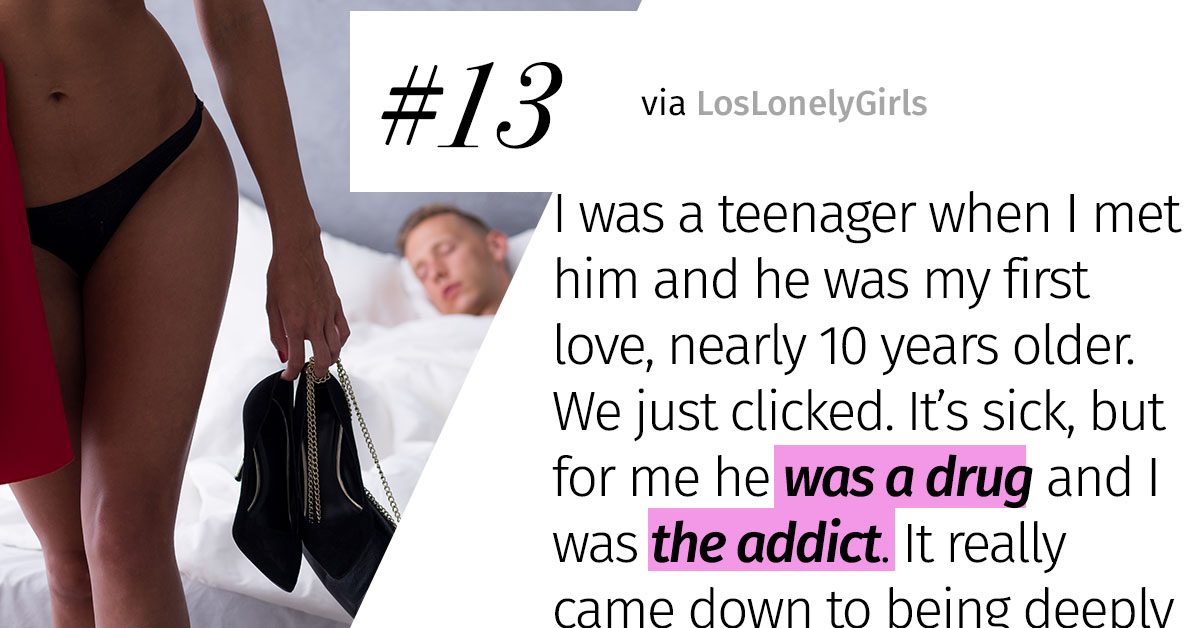 When it comes to relationships and affairs, many people on the outside are always wondering one thing–why? For those who have never been the “other person” or the “side piece,” it’s hard for them to truly understand how that kind of situation comes to be, or, continues to happen.
It’s not always random, and it’s not always calculated, either. People all over the world have many different reasons as to why they became someone’s “side piece,” and home wrecked a relationship. People on Reddit are sharing why they decided to partake in this kind of “non-relationship,” and why they stayed in it, too. Some of the answers, honestly, are pretty eye-opening.

I was young, she was an older married woman at work and I was stupid. At first I just thought she liked me, and it was no strings attached fun. Then suddenly she told me she had a husband and somehow I believed her when she was gonna leave her husband to be with me. I wasn’t even sure if I wanted that, but went with it, cause, young and stupid.

The delusion only lasted a few weeks. He showed up at work to pick her up, and I met him, and was like, “What the fuck am I doing to this dude?”

And that was the end of it. I couldn’t handle that shit. I felt terrible for what I’d done.

I was the side chick, but I didn’t know.

I met this guy and we immediately hit it off. We had so much in common and he was so easy to talk to. I fell for him hard. He had shared with me that his last breakup was awful, so he wanted to take things slow and not rush into anything. He told me I was the first girl that caught his interest in over a year. This meant we only saw each other and spoke on the phone 2-3 times a week. To some of my friends and family it was a bit odd and honestly sometimes it was very difficult, but it worked for us.

About a month after we met, he tells me that he wasn’t very honest with me before and that he had been casually dating someone else. I was a little shocked, but he assured me that it was over, and I was the only girl he was dating.

Months go by and things are going so well between us. I really felt such a strong connection with him. As I said before, we only spoke a few times during the week. This was usually on a weekday. So, I was a bit surprised when he randomly called me on a Saturday and told me that he needed to speak with me. He tells me again that he had not been very honest with me. He starts sobbing and tells me that the girl he told me about several months before was his girlfriend. I was speechless and confused so I just hung up on him.

He spent the next week convincing me that he broke up with her and that it was over. He told me that he met her a few months before me and had been trying to break up with her since we met, but he felt guilty. I don’t know why, but I believed him…

Fast forward to about 1.5 years later. Things between us were good and I was happy. I was seeing him more throughout the week and it seemed like we spent most of our time together playing video games and enjoying each other’s company. I get a text from his best friend asking if we could meet for lunch later in the week. I was close to most of his friends, so this was a common occurrence.

We meet for lunch and the friend is unusually quiet. After 10 minutes of sitting in almost silence he tells me that my boyfriend has been lying to me. I found out that my “boyfriend” had been in a relationship with someone else for almost 8 years. The same girl that he had lied to me about twice. I didn’t want to believe what I was hearing. I was so angry at him and all his friends who had been lying to me. I got up, walked out and went home. I was being bombarded with texts and calls for a few days before I changed my number. He kept showing up at my house, but my brother would tell him to leave. I never really spoke to any of them after that. I just walked away.

I still get emails from him, but I don’t bother reading them. I feel that once a cheater, probably always a cheater.

Looking back now there were a ton of red flags. I just wish that I paid more attention to them. I really did love him. I find it so hard to trust people now, but I hope that with time it will get easier.

I was young, selfish, and figured their marriage woes were not my problem. They must have had issues or he wouldn’t be in the game right? Besides it wasn’t serious, we were just fooling around.

That’s how I rationalized it anyway, until I met his wife. She was actually a really sweet person and if there hadn’t been this giant awkward elephant in the room, I might actually have become friends with her.

It had been a lark for me, but it was her whole world I was messing with, and she was hurt. I’m pretty sure she knew.

That was it for me, I felt like the biggest cockroach in creation. I called it off immediately and later transferred to another office when he seemed less than willing to let it go.

Before long, he got caught with yet another woman and they ended up getting divorced anyway. I still regret my part in it.

Basically because I have no intrinsic sense of self-worth whatsoever, and the most potent method of feeling good about myself I’ve ever experienced is to be sexually desired by someone. Combine that with the fact that people who are looking for secret side action are often very eager and not particularly picky, and you have the perfect opportunity for someone like me to stave off the worst symptoms of depression for a while longer.

Sometimes you end up going home with your boyfriend and after freaking out because his WEDDING PICTURE his hanging on the wall, all he has to say is, “I thought you knew.”

I wasn’t in the best spot in my life. Just got out of an abusive relationship. I had been humiliated during sex for the past several months and I needed someone to want me.

I had a huge crush on a girl in a club I was looking to join a few years ago. I joined the club through a rigorous audition process and we talked for a long time throughout the vetting process. She mentioned that she often went blues dancing late on Saturday nights so I ended up going and we eventually hung out more and more once I got into the club.

On a club retreat, there were too few beds so we ended up sharing a bed with two other friends of mine and we talked all night. From then on, it was clear something was happening so we had a long conversation. To her credit, she was very open about her situation: She was in love with a man sentenced to prison for two years for rape and she herself was raped by a different man during high school. She was also currently dating three other guys with permission from her jailbird.

Ultimately, I decided to date her because I was convinced I could be a better boyfriend than a convicted rapist and she would leave him and the other guys. She ended up dating me exclusively within a week but continued to talk to the guy in prison for the following nine months we were together. He called her nearly every night and they talked from anywhere between fifteen minutes and two hours, often with me beside her because we hardly spent a night apart.

I loved her so much, but she ended up staying true to her word and decided to stay with him and we broke up before we left for separate studies abroad. I ended up meeting him a few times when he showed up to the club meetings after we both got back and I’m not sure anyone in the club knew the full story. She supposedly told him everything that happened while he was in prison but I’d be surprised about that. They’re still together today and I walk away with the thought that if they don’t get married, I’ll be pretty pissed off. Still, I learned where I was willing and unwilling to compromise in a relationship and, ultimately, that compassion is an easy thing to give even when things are hard. While the aftermath hurt like hell, I became stronger for it and have had an easier time opening up to the people I’ve loved since.

i was pretty low for awhile after my ex wife and i split up. i had been cheated on and i had a pretty drastic change in heart about how i felt about hooking up with someone who was married, given things that had gone down in my own relationship. Came to feel like, if me hooking up with a married woman was a problem, it was a problem between the husband and wife, and their marriage. I felt like if the woman had decided to sleep around she was going to do it, so it might as well be with me.

I don’t do that anymore, but i don’t think it’s because i’ve fixed my point of view. I was hooking up with a lot of shitty people and decided to stop that behavior, and came to realize most folks that would cheat on a spouse are shitty people. pretty jaded on relationships and people in general these days

This is a really horrible story. Started seeing a guy and right off the bat he lied about women he was hooking up with. Broke things off with him because I didn’t want the drama I was getting roped into unknowingly. But we actually clicked as friends so we still talked.

I then started dating an alcoholic who did some not so nice things to me. The first guy was the only one who believed me and helped me though the rough patch. Stupid me started seeking physical comfort from my self confessed man whore of a friend.

The alcoholic ex found out and lighty stalked me and had a major blow up and confronted me and my friend. That is how I found I was the side chick…. From my psycho ex. This whole series of events has killed my self esteem. I feel like garbage. I still keep going back to the friend even though I know I’m the side piece. I’ve tried dating but new men scare the crap out of me. I’ve cried about it. I’ve tried reasoning the guilty feelings away. I have even thought of killing myself over it.

Its a sad and lonely life. And I have been dealing with this for seven years. You get to the point where you think so little of yourself and you think this kind of relationship is all you are good enough for. Its a really ugly cycle.