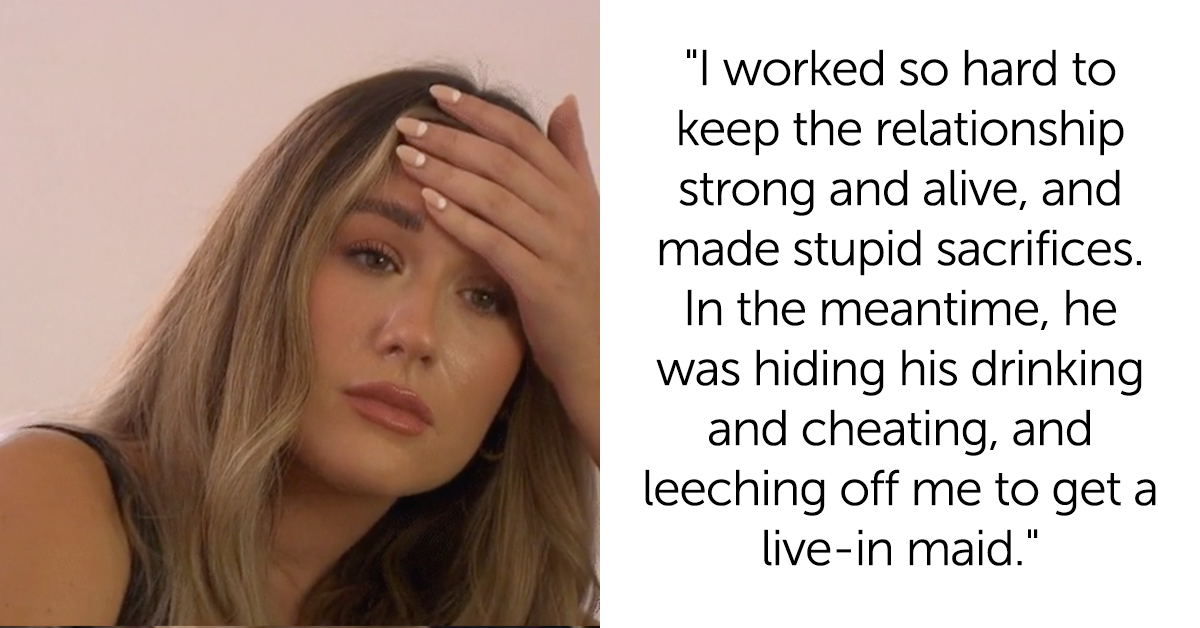 Get your hearts ready for a gut-punch, my friends, because this list is going to wreck you as I send you into the weekend. Sorry.

I was casually strolling through Reddit last night and was really walloped by u/Mamacc210_‘s question to the AskWomen sub. They wondered, “Right now I’m learning that love isn’t always enough, when did YOU realize that love isn’t enough and how did you deal with it?”

I rounded up some of the top replies for us to all break our hearts over.

I just broke things off with my boyfriend a few days ago. We were good. We got along well, had fun together, and grew together but his mother kept interfering. He claimed he “loved me” which I do believe was genuine but he’d never take the actions necessary to solidify or protect our relationship. I stuck around for three months while he tried to convince his mother into letting him continue dating me (HUGE red flag). Just because you love someone (the feeling) doesn’t mean things will always work. I ended up breaking up with him. I want an adult relationship and not a man afraid of his mother at 24 years old.

When I realised that he didn’t want the life I was working toward, and only said so because he didn’t want to break up. I had to ask myself if being with him and all the compromises that accompanied it, was worth giving up on the life I wanted for myself. I chose my own happiness because loving him but hating myself and my life was no way to live. I don’t regret my choice.

The last couple of years of my marriage. I dealt with it by divorcing him. Sad part was it took 28 yrs to realize. It was my love I was giving him. It was me that had to realize that ‘my’ love was not enough to sustain us both. He never really loved me.

I LOVE love. I really do. But when it comes to relationships, especially marriage- love is not enough. In my experience, people can honestly love each other, but never pick up the tools that they need to ensure that their partner feels loved by them. One might love another, but that can be lost in translation when folks can’t figure out how to communicate that love in ways that are meaningful to your relationship. Those “communications” (or the efforts put into those communications) are the substance behind the sentiment. Love is shown through our actions, our commitment, our willingness to care for each other’s wellbeing, and in our desire to collectively meet the needs of our relationship.

When I realized that I had spent 5 years trying to teach a man how to love me in the ways I needed him to, and listening to him say that he would keep trying because he loved me while nothing really changed significantly. I realized that I had spent years of my life trying to be okay with the idea, the thought that he loved me but never really feeling it. I think he loves me, I believe he does, but the thought isn’t enough. I decided that I couldn’t live that way forever, and ended things. It’s been really hard and I’m still in the middle of it, but a weight has been lifted off of me. I have to keep reminding myself that there is someone out there that will make sure I feel loved, not just think I am.

In my last relationship to an alcoholic. I worked so hard to keep the relationship strong and alive, and made stupid sacrifices like giving up a good career path because he didn’t want to live where I worked. In the meantime, he was hiding his drinking and cheating, and leeching off me to get a live in maid.

The final straw was when we started looking at houses together. He wanted to use my income to remodel whatever we bought, but my name wasn’t allowed to be on the title, plus he wanted a prenup to protect his precious (barely above minimum wage) assets. The sad thing is, one of my uncles is a recovering addict and his girlfriend stuck by him and they recently got married. I thought I could do it and follow their example, but what I didn’t notice is that while I was following her example, my ex wasn’t following my uncle’s example of actually getting clean and improving himself. It was a hard lesson to learn and I’m just now getting my life back on track to where I want it.

My schizophrenic (now ex) boyfriend’s dog just died and he had cried himself into another psychotic episode. He was on the floor rocking back and forth saying “go find {insert his own name}”. It was bizarre and definitely terrifying for anyone who is not familiar with mental illness but in that moment I realized that has become my normality. It was as normal to me as sitting on the couch and watching TV. I knew l needed to leave in order to give myself a shot at having the life I wanted (stable marriage, children, etc). No amount of love would cure him. Medicine, counseling, therapy, all of that made him halfway normal but nothing would fix this and I had to finally chose myself first and go.

I was with someone for 4 years who felt like home to me. He was my best friend. But all through those years he couldn’t keep a job, blamed all of his downfalls on other people, couldn’t take basic direction, and relied on me for almost everything. As much as I loved him, I became a mother to him. It was so hard to leave because he just didn’t understand how I could give up our love, because it felt so right. But I realized I was moving forward with life and he wasn’t moving anywhere.

not sure this qualifies as an answer. But I learnt it with my dad. I know he loves me deeply. i do know that. But i also know that his wife is the priority, he is the priority. To call me an afterthought would be wrong, but yeah. Romantically i learnt it too, with people who love you and therefor view you as somehting analogous to property. Youre in service to them because they love you. But it takes work both ways to maintain something meaningful. Boils down to actions speak louder than words

Was involved with a guy and there were a lot of really intense feelings. But at the end of the day that’s all he was capable of giving me and sometimes not even that. He didn’t want a future, he didn’t want commitment, sometimes he couldn’t even give me honesty or respect. The feelings were great but those alone aren’t sustainable for the long term.

With my parents, they loved eachother (and only eachother) and they teached us that love was enough. But it wasn’t, we were all miserable, I hated there and I would make everything I could to not have the same life as them.

When my husband got caught having an emotional affair with a coworker while I was killing myself to take care of our child, work, and keep my dying father alive. I dealt with it by staying in bed for 6 weeks unless I absolutely had to get up. Then I ate my feelings and put on a bunch of weight.

When my ex kept telling me that “love conquers all” or something similar while ignoring or dismissing the relationship problems I brought up.

Loving someone and being IN LOVE with someone is 2 different things. You could love someone for a long time but if there are no communication or future goals to work towards together as a couple, the relationship becomes stale. I realized this with my ex-husband where we reached a plateau in our relationship and we weren’t moving forward as a couple. I still love him, but I’m not in love with him.

When I was having a mental health crisis and it put a strain on our marriage, but we both were young and not very mindful and self aware. One night after a huge fight we just sat there and he said “I don’t know what more you want from me, I come home to you every day”, and I said that just being physically there and treating a relationship like some cute shiny thing you can put on your dresser and play with it whenever you feel like it, isn’t enough. A relationship is a living thing, it needs attention and effort, or else it would die.

This is a difficult question. I think love is always enough, but sometimes people are unable to return that love or show it in the way we expect. In those cases, it can be difficult to maintain a relationship. I think the best thing to do is communicate openly with your partner and try to understand their perspective. If you’re both committed to each other, you should be able to work through any challenges.