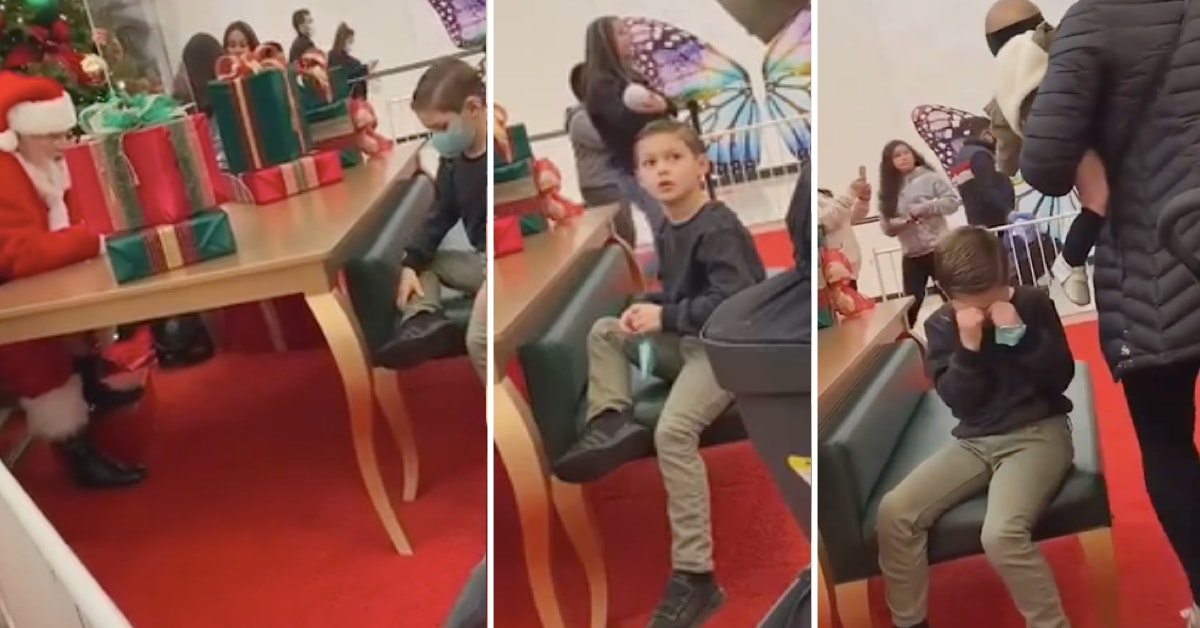 This story is clearly designed to make people mad at “the libs” for making a child cry at Christmas, but there are so many absurd elements to the story that it’s kind of hard to keep a straight face. The New York Post reports that this Facebook post was put up by mom Susan Parker. It was filmed at Harlem Irving Plaza in Illinois, in front of a socially distancing Santa Claus.

The Santa is seated at a table across from the kids, like he’s having a Naughty or Nice business meeting. He looks pretty over it, and when the little boy asks him for a Nerf gun, he gruffly replies, “No, no guns.”

The boy’s mom is nearby and tries to explain again to Santa that he means “Nerf gun,” and perhaps to signal there’s already a Nerf-shaped gift under the tree. Kris Kringle is not interested in her B.S.

“Nope, not even a Nerf gun,” he said, wielding his yearly power. He tried to soothe over some hurt feelings with some alternate ideas.

Edited to add:Harlem Irving Plaza has responded quickly and with kindness and understanding. They have a special…

“If your dad wants to get it for you, that’s fine, but I can’t bring it to you,” Santa says to the boy. “What else would you like? Lots of other toys. Legos. There’s bicycles. There’s cars and trucks. What do you think?”

The kid is clearly overwhelmed and shocked to get his request rejected by Santa, of all people. He turns to his mom and bursts into tears. His mom hugs him and assures him he’ll “still get it.”

Parker writes that the mall responded to her complaint about Santa very quickly and even posted a video of a conservative Santa knocking on the family’s door with the gun the boy craved:

Thank you, Harlem Irving Plaza for restoring the magic of Christmas for one little boy. Santa made a early delivery and it was a wonderful gift, a nerf gun.

Ultimately, it’s good that a little boy’s faith in old men giving him toys was restored, because no one should be crying on Christmas. But I do have a conspiracy theory: the no-guns rule isn’t the original mall Santa’s, it was something he was asked to do by either the mall itself or the company that hires out Santas. Then they threw that Santa under the bus when things went sideways.

That’s my theory! And Santa, if you’re reading this, please leave me a note in my Christmas stocking if I’m right.