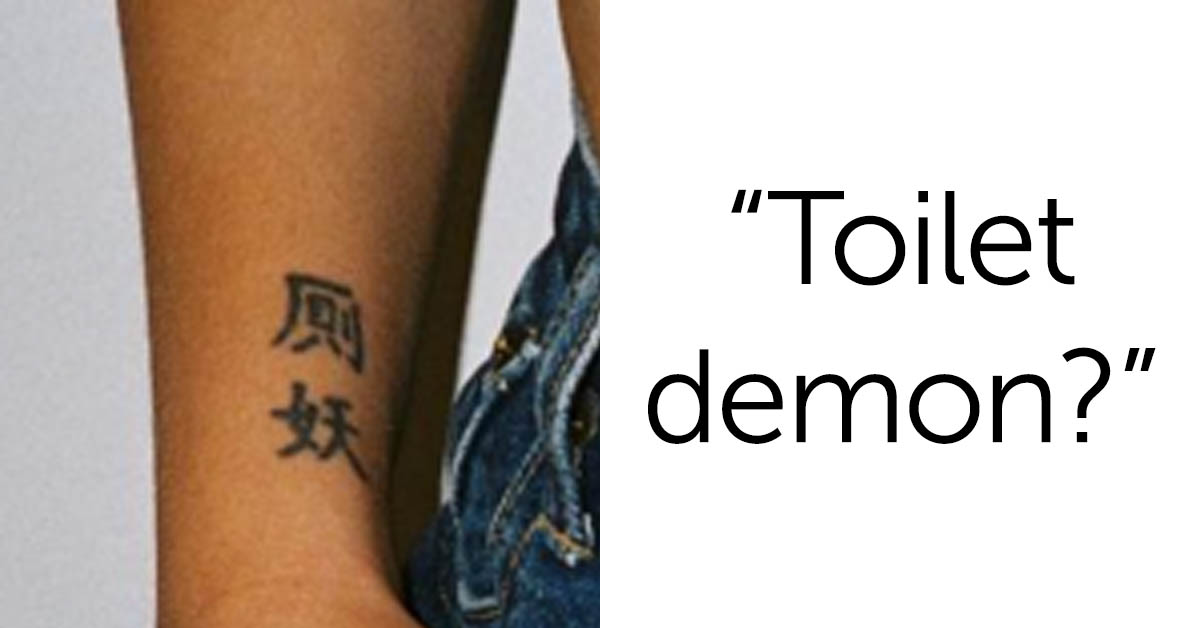 You’d think by now people would know not to get a tattoo in a language one does not speak.

Then again, I suppose if you trust an artist to draw on you permanently, you’d trust them to know what they’re drawing. But luckily for our entertainment’s sake, the saga of the mistranslated Chinese or Japanese character tattoo lives on.

We’ve collected some of our favorites debunked tattoo translations, along with some from Hanzis Matter, that’ll both make you laugh your ass off and also make you feel better about deciding against that “live, laugh, love but in Chinese” tramp stamp when you were 16.

“He thought it said “Love my grandson”. It translated to something like “I love fat boys”. I think it was a google translate failure of epic proportions.” –MisterComrade

3. Never use a hungry tattoo artist…

“I speak Japanese. A guy had a massive Kanji tattoo on his arm. I asked him, “what did you ask them to put on you?” He said “oh, this? It means courage.”

“When I was in the Army, one of the guys I was in with had this tattoo that he was super proud of. He claimed it meant fierce. We went with it. A few months later, we’re sent, as a group, to San Francisco as part of a recruiting, PR trip. We go into Chinatown and a get dinner together. The guy with the tat always made sure that tat was visible. We’re sitting at the table and the waitress takes our order, as she does she looks at dude and asks if he raises chickens?

Dude: “What are taking about?”

Waitress: “You have chicken on your arm.”

Waitress in calls to another and says, “What that say?” “tell him.”

You could just see dude die inside. Especially when a third person who’s English wasn’t as good says “It say cock”. –gunbunnycb

9. Shout out to this Mexican tattoo artist

“Someone close to me got a Chinese symbol tattooed on them years ago. One day, I was talking to a colleague/friend and I asked what the tattoo said. Instead of saying Courage (or something like that), it said “human”. Apparently it was missing one line or something that would of made it the correct word.

I never told him that his tattoo says Human.” –0rangePolarBear