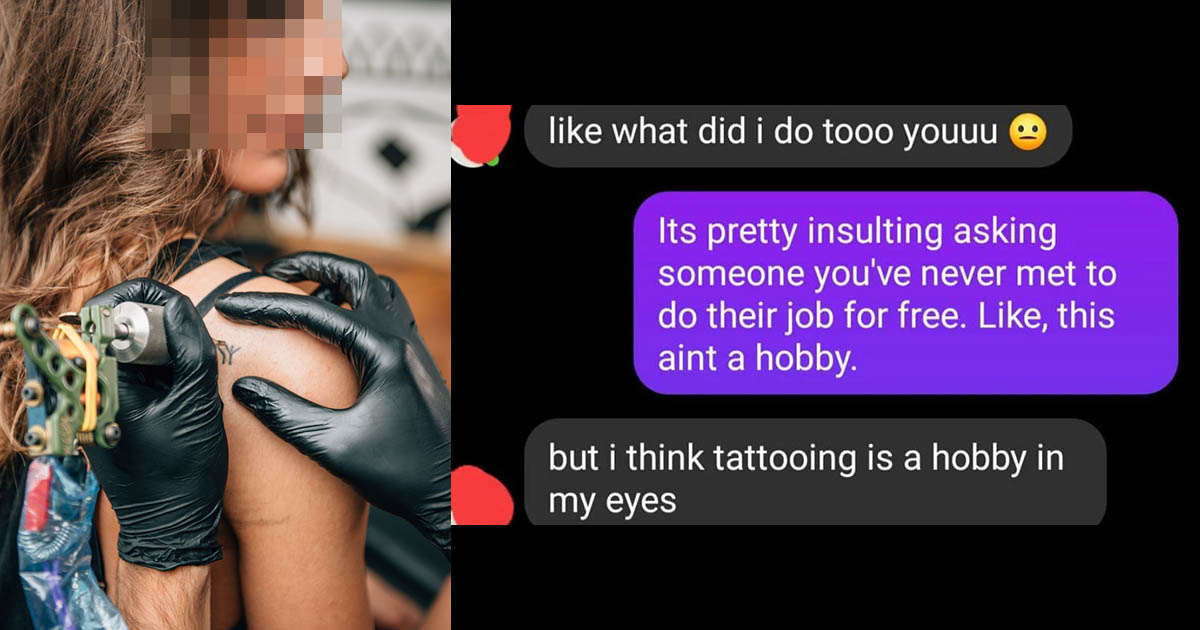 Across all artistic professions, probably the most annoying thing about being creative for money is all the people who think you should do your work for free, at least for them specifically, because enjoying one’s work must reduce its value somehow.

What they seem to mysteriously forget is that labor is still labor, and finding some amount of joy in that labor doesn’t make artists need to eat any less, nor are we charged less in rent and other living expenses.

Still, for whatever reason, artists find themselves routinely having to explain these simple facts to customers who think they can mental gymnastics their way into free artwork, such as the tattoo artist who posted their experience on Reddit. What started as a compliment from a customer ended up where these conversations too often do—with said customer trying to weasel their way into free work that would likely take up several hours and be worth hundreds of dollars.

The conversation caught in screenshots doesn’t exactly start well, either, as someone asking if you’re “actually” an artist isn’t often a compliment. Then, instead of doing their own research, the not-really-a-customer asks if they can see some of the artist’s work, and when directed to the social media page where that work would of course be, they claim to be “lazy.”

Still, without apparently looking, they express the desire to have the artist “tat me up,” which suggests extensive work, but they don’t want to have to pay for it.

“Give me some stuff to tattoo and the money to go alongside it and you can have whatever you want,” says the artist.

“[Y]ou lost me at MoNEy,” the non-customer replies, “if [I] was rich and had a ton of money [I] would be tatted up already.”

“I don’t work for free,” the artist points out with a laughing emoji.

That’s when things go downhill. The person who messaged the artist tries to claim that “if you enjoy it then it’s not really working,” ignoring the fact that enjoying one’s job doesn’t make it any less time-consuming or erase a person’s basic needs.

“Yeah but [I] also have bills to pay and a child to feed,” says the artist.

It’s a strange cultural phenomenon that people seem to want to think that work requires suffering and that people’s time isn’t valuable. The artist could do both the free tattoo and a paid tattoo, but that would take hours away from the time this person could be spending with their child, which could arguably be the most valuable thing in their life.

Also, just because someone enjoys making art, that doesn’t mean that’s what they want to be doing at all times in their life. Either way, artists generally do not enjoy people wasting their time with this kind of twisty logic designed to try and drag valuable work out of them for free. Yet this individual couldn’t understand why the artist became unhappy with them as they pressed about who the money would be spent on for some reason.

“[It’s] pretty insulting asking someone you’ve never met to do their job for free,” the artist explained. “Like, this aint a hobby.”

Somehow, even after identifying that they were making the artist angry and being told exactly why the artist was angry with them, this person kept doing the thing, saying that “tattooing is a hobby in my eyes” and that “it’s better than most jobs.”

At some point, it takes less effort to simply get a job of one’s own and save up enough money for tattoos than to keep trying to convince an uninterested tattoo artist to do a ton of valuable work for free. Plus that path has the extra benefit of avoiding ending up as a joke on Reddit.