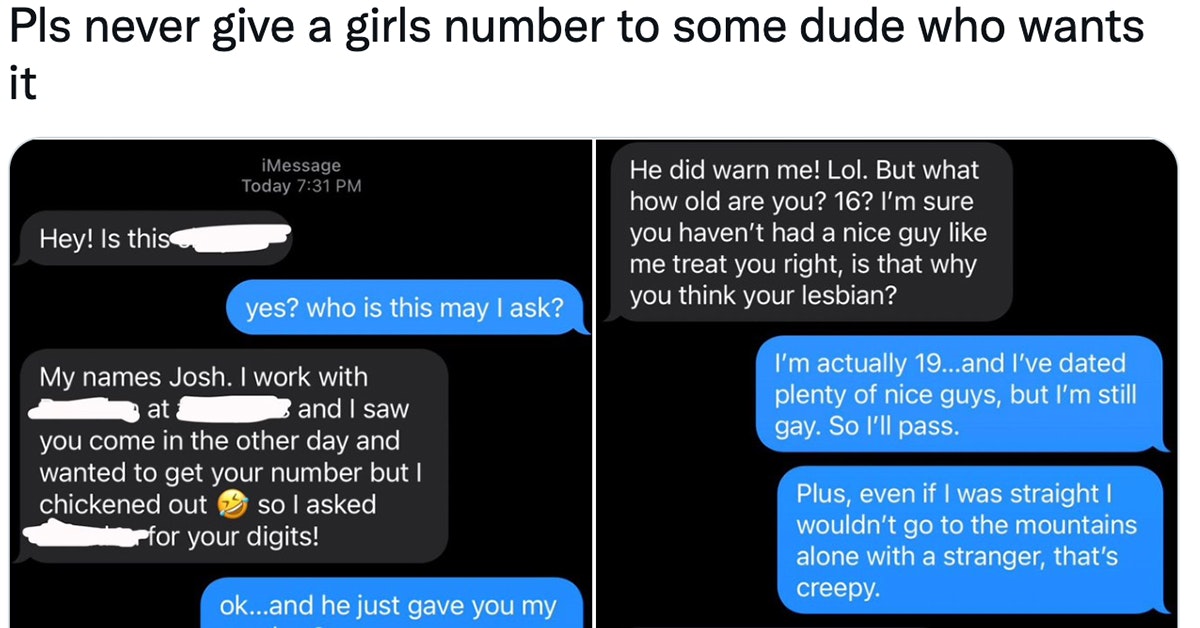 A viral text exchange is serving as a reminder not to just give out your friends’ phone numbers to strangers who ask nicely.

It’s a sentiment that seems obvious to anyone (particularly women) who has ever dealt with someone (namely, a man) who felt entitled to access to their personal life and attention. But not everyone has bothered to think this through.

Some guy named Josh thought a woman who came by his place of employment was “super hot,” so rather than speak to her at the time, he got a mutual acquaintance to simply give him her number — an alarming fact that was not lost on the recipient of his texts.

Even though she had no idea who this guy was, he immediately pivoted to inviting her to a trip into the mountains that weekend, where he thought they could “get to know each other.”

“did [mutual acquaintance] happen to mention I’m gay?” she asked. “like I don’t date men.”

“He did warn me! Lol. But what how old are you? 16? I’m sure you haven’t had a nice guy like me treat you right, is that why you think [you’re] lesbian?” he replied.

It soon became clear that Josh is some guy in his mid-30s, and even though the woman he was texting with told him she was actually 19, the fact that he thought he was hitting on a literal teenager less than half his age doesn’t make him look like anything other than a complete creep.

But Josh didn’t seem to think so. After she repeated that she’s gay and not interested in dating him or any other guy, he called her a “rug muncher” and complained about “f—king women” when he’s just “trying to be a good nice caring guy.”

“Shut the f—k up I thought I was being nice by giving you ugly b*tch a chance I’m done being nice,” he wrote.

Violence against women and girls who reject the advances of men — no matter how they do so  or what the reason is — is still jarringly common. And now, thanks to a guy who didn’t think giving out a woman’s number to a man she doesn’t know was a big deal, this aggressive weirdo has access to her phone number and whatever other information he can find with it.

But there were a ton of glaring red flags in this entire exchange, and people had a lot to say about it.

In summary: don’t be a creep, don’t enable the creeps, and definitely don’t assume that 30-something-year-old men wanting to hit on your lesbian teen acquaintance aren’t creeps, because they inevitably absolutely are.