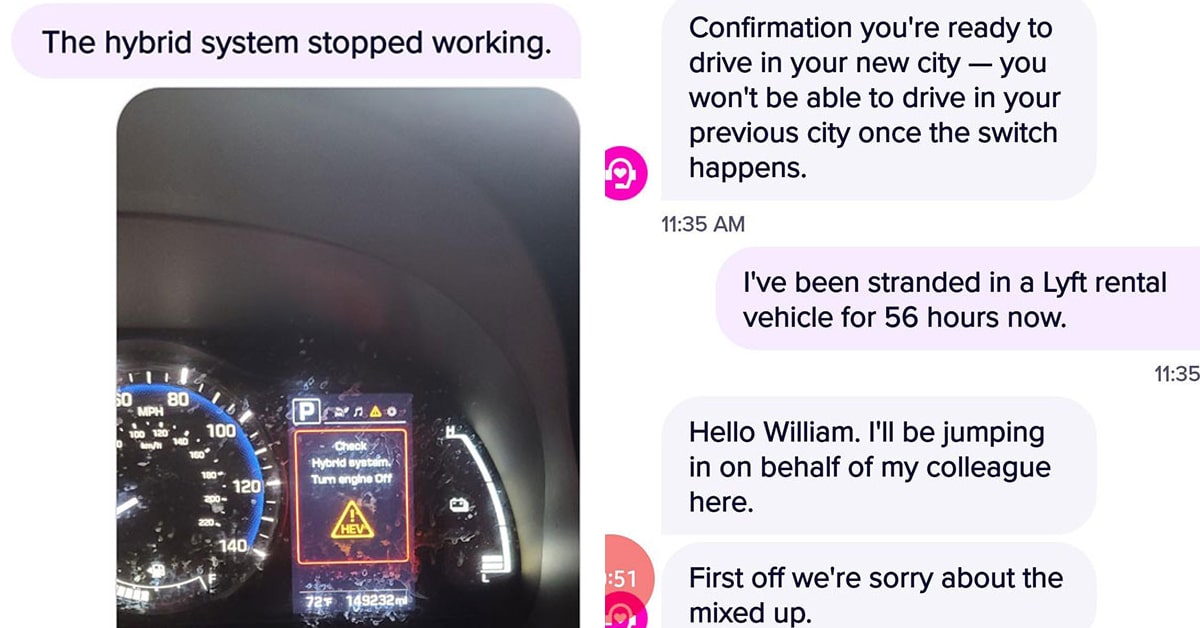 Say it with me: the gig economy is an abusive way to make a living.

For all people complain about work, their bosses, and working for companies, let me tell you: working as a misclassified independent contractor for a company who doesn’t consider you an actual employee? WAY WORSE.

Imgur user recently shared an altercation with a Lyft drive he was supposed to take. He doesn’t use his own car for the extra work, but rents from Lyft instead.

You heard me: he rents. The car. From his employer. To do. THAT JOB.

One day it was heavily raining where William (aka Thanksforl) was driving and the car began to malfunction. The Hybrid Electric Vehicle system showed a warning saying he needed to check the system and then the engine didn’t turn on to charge the battery, which was nearly dead.

William was stuck there and because he was working at the time, he had to turn down two requests while in a bonus zone. He is also in danger of having his account suspended because he canceled the rides.

He tried contacting support for help.

But the message support system just told him to contact Lyft Roadside Assistance and that he may be charged for a tow.

William couldn’t get any further information out of what may be a bot, including intel regarding whether his account would be suspended.

At long last, the bot (or person, I guess) figured out there was a problem with the car. William also showed a photo of the warning and was promised a team would help him out. Lyft ignored William’s request to get a ride home.

He waited an entire day and, irked, contacted support again but he only received the same “let me look into this” non-answer.

He is routinely cut off from the bot (or person) and has to start the entire process all over again, hours and hours into this situation.

Every time William registers a complaint, they just… pass the buck.

William finally decides to just call a tow on his own dime.

He FINALLY seems to get a person on the line, but…

It quickly reverts to canned messages.

William tries AGAIN to get this support agent to do anything remotely helpful.

But for reasons(?), the agent says they can’t do that. Or — AN agent, I should say, because William has been disconnected so many times at this point, I’ve lost count.

Did they fix this? At the end of all this, did Lyft do ri– oh.

Say it with me, everyone: Lyft doesn’t give a shit about you.