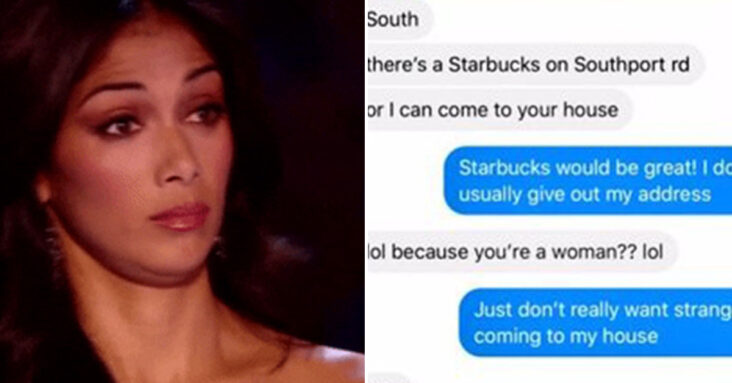 While we can #notallmen as much as we want, one of the more frustrating things about being a woman is that the men that do go out of the way to make our lives difficult tend to show up in the most random places, making it hard to do even the most normal things without a certain level of caution that sometimes feels like it’s bordering on paranoia — until it’s not.

A viral exchange between a woman selling an iPhone on Facebook marketplace and the man who felt the need to “educate” her on why being a woman isn’t dangerous at all, actually, is serving up the latest reminder of this bleak reality.

The lengthy exchange, which was shared on Twitter by @incelReplies, starts out simply enough. The man asks about the phone the woman is selling and suggests a Starbucks where they could meet. But then he follows it up with an offer to come to her house instead and starts to get aggressive when she says she doesn’t usually give strangers (of any gender) come to her house.

“tbh it’s so silly the way you women are about men,” he replies, throwing the conversation completely off track. “There’s no reason to be scared of men and avoid giving out your address. You can trust me I’m a nice guy.”

When she declines and points out it’s not a gendered thing, just a general stranger thing, he goes off about how “the whole feminist movement” is out to make men the bad guys and that “women don’t experience the harassment they claim.”

“Dude. Do you want the iPhone or no?” she asks.

“I’m just taking the opportunity to educate women about the reality of their world,” he says, because literally of course he does. “Stop fearing ‘rape’ and things and you’ll stop attracting the bad energy. let me come over and you’ll see I won’t rape you. then you can trust men.”

It would surprise no woman ever that things quickly devolve even further from there, with him getting sexually graphic, insisting rape rarely happens and is mostly something women lie about, and tells her to “just die” for no longer responding.

“you women ignore nice guys when they cross your path. Could’ve sold the phone and met a nice man but no you and your stuck-up ways,” he ranted. “Can’t wait until this bs female nazi shit is over. Go die whore.”

The setup and turn is so extremely on the nose, it would be difficult to believe — if it didn’t happen all the time.