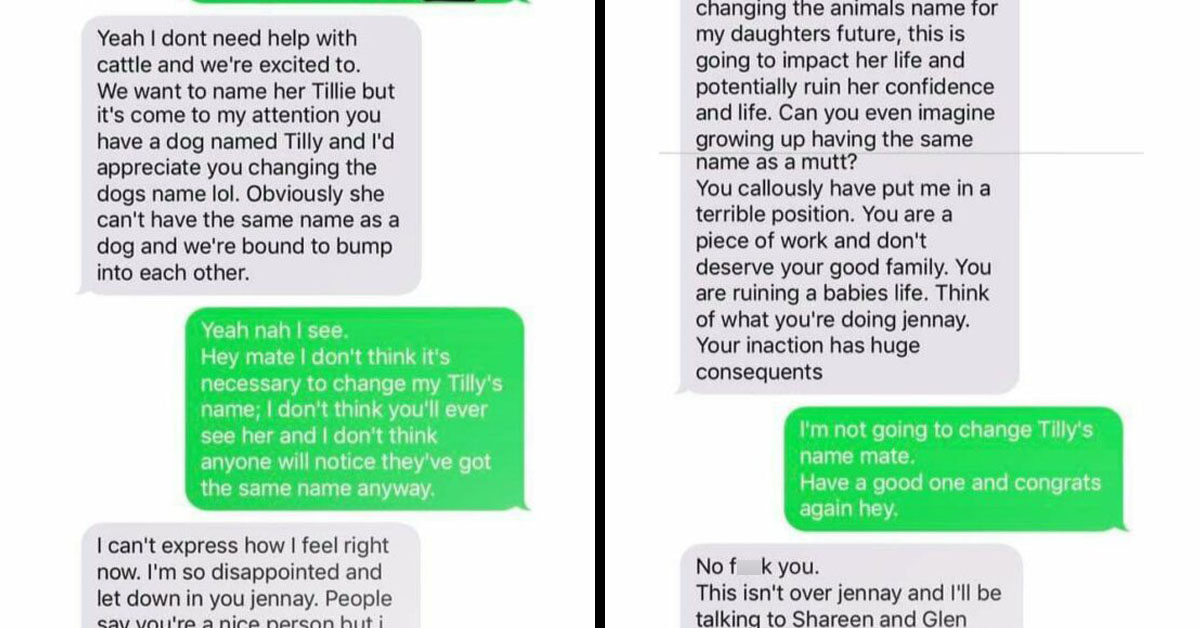 A pregnant woman recently demanded that a dog owner change the dog’s name because the pregnant woman wanted to name her unborn child a similar (not even the same!) name.

Jennay was blown away when a pregnant woman she knows made the demand.

The text conversation was uploaded to Reddit. Join me in WTF??ing through this thread.

“We want to name her Tillie but it’s come to my attention you have a dog named Tilly and I’d appreciate you changing the dog’s name lol.” Yes. LOL indeed.

The irate mother-to-be tried to use quote-logic-unquote,  “obviously she can’t have the same name as a dog and we’re bound to bump into each other.”

Jennay wasn’t too thrilled with the entire thing. She said, “I don’t think it’s necessary to change my Tilly’s name. I don’t think you’ll ever see her and I don’t think anyone will notice they’ve got the same name anyway.”

The mother continued, “You don’t have children you’ll never understand how a mother can love and just want the best for this perfect little person,” she wrote. “I’m honestly shocked you’re being so heartless and unreasonable.”

She asserts that having a near-ish name to a dog’s would “impact her life and potentially ruin her confidence.” And wait for this doozy:

“Can you even imagine growing up having the same name as a mutt?”

The kid, we expect, would be thrilled. One Reddit poster wrote, “five year old me would consider a dog with my name akin to one of those personalised “name” mugs.” And like, yeah. Totally.

Another user went a little more spiteful: “I’d be posting photos of my dog Tilly every day so people would know that’s my dogs name.”

Others commented that they laugh about it like normal people. As jowesche puts it, “This woman is an idiot.”