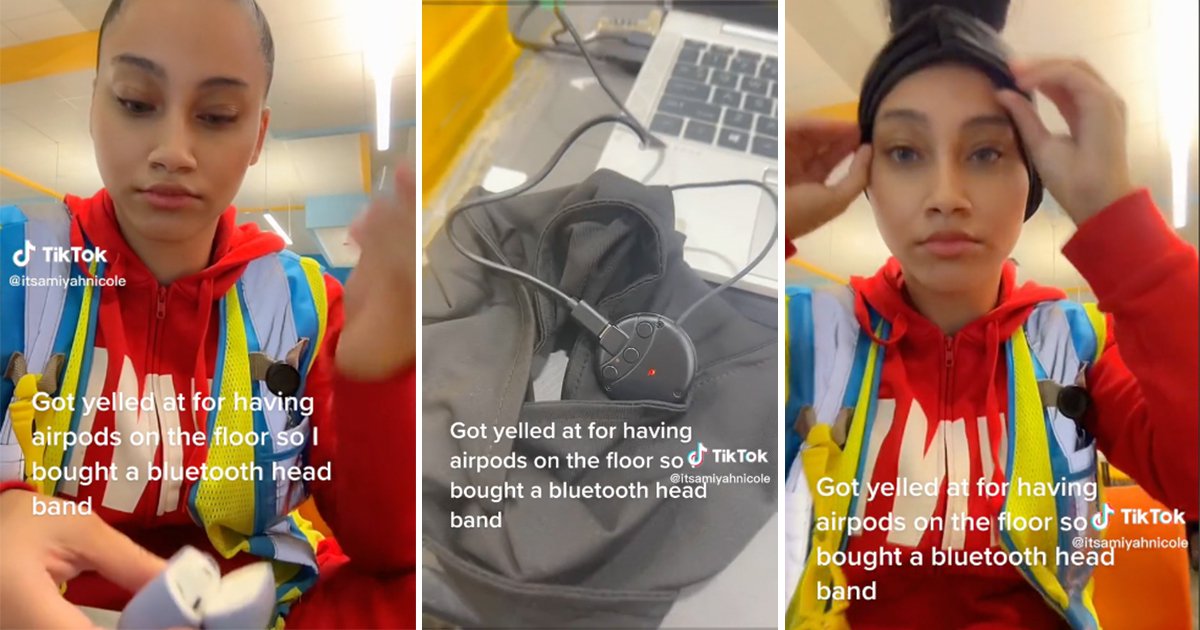 If you participate on the Internet, you’ve probably heard about the dreadful working conditions some Amazon employees go through.

From having to relieve themselves in a water bottle on long shifts, to unsafe, grueling conditions in warehouses, it seems like a slap in the face to loyal workers that now music is banned as well. Luckily, an Amazon employee and TikToker have found a way around this recent “AirPod ban” at her warehouse location.

In the video, Amiya put together a quick how-to on ordering a Bluetooth headset. Once received, she hid the headset underneath her actual headband. In a text overlay of the video, Amiya wrote “Got yelled at for having airpods on the floor so I bought a bluetooth head band.”

Many users who saw the video claimed that the ban on headphones was simply for the workers safety. Both Amiya’s and Amazon management’s side of the story are valid. It’s unfair to take away music altogether, but it can also be a safety precaution. You never know what sounds you may miss if you have Taylor Swift’s newest album blasting in your ears.

A compromise could solve the issue, but according to other Amazon employees, the Amazon corporation isn’t too big on hearing their workers out.

Amiya did what she could by ordering the type of headphones she did. Rather than being directly in her ear as an AirPod is, the speaker for this Bluetooth headset can sit on the side of her ear so that she can still hear her surroundings.

This Amazon employee’s idea to workaround the workplace ban on AirPods had a collective of 525k likes and 4 million viewers.

Several viewers commented on the vest Amiya was wearing in the video, implying that the creator’s distinct vest identified her as an Amazon Learning Ambassador. Many noted that the TikToker may have accidentally just told on herself by exposing her higher-ranked working position.

According to Warehouse Ninja, “Learning Ambassadors train and onboard new employees in Amazon warehouses. Essentially, they prepare new associates for success. They work under the Training Department and you can tell them from other associates by their uniquely colored safety vests – often green and blue – that have the words ‘Learning Ambassador’ printed on them.”

Viewers backed Amiya’s method and reiterated that music is an important part of keeping a calm and happy attitude in the workplace.