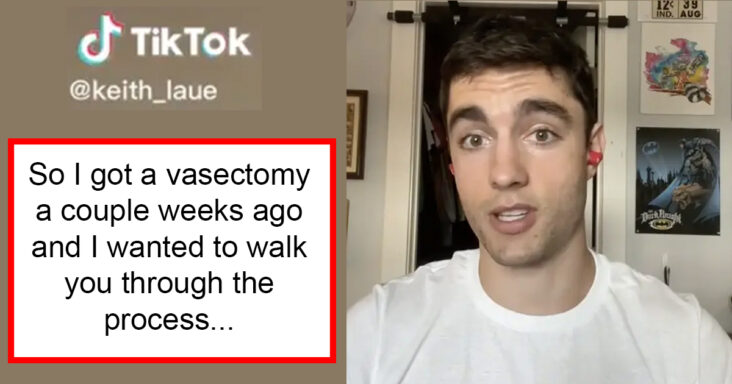 So what exactly is a vasectomy?

A vasectomy is a surgical procedure for those with male reproductive systems that cuts the supply of sperm to semen. Doctors accomplish this by cutting and sealing the tubes that carry sperm. During the procedure, doctors make a small incision in the scrotum and locate the vas deferens, aka the tubes that carry sperm from the epididymis to the urethra. From there, the doctor pulls the vas deferens out of the scrotum, gives them a little snip-snip, seals the ends, then returns them to the scrotum and stitches everything back up.

Recently a man on Tik Tok came forward about his process of getting a vasectomy. Viewers praised him in the comments calling him a “hero” and implying that he was paving the way for men everywhere to have this procedure done if they were not intending on having children.

Keith’s video — currently sitting at over 3 million views — explains in depth his personal experience getting a vasectomy, the before, after, and even during the procedure.

“I was awake the whole time” He says.

In the video Keith mentioned, “I know that getting your nads snipped is very anxiety-inducing but it’s way less nerve wracking than an unwanted pregnancy.” He makes an excellent point. His choice to share his experience will hopefully inspire other men to take part in this form of male birth control. You can find his video in full below.

Some commenters were actually disappointed in him for the procedure…In the best way.

What Keith did was truly amazing. He even went as far to mention the recent overturn of Roe V. Wade is what inspired his decision. As intimidating as it may sound to have a procedure like this completed, it’s actually quite easy and painless, and the recovery time is quick. But this isn’t even the best part! Vasectomies are fully reversible, and if at any time you change your mind and decide you do in fact want children, you can have the operation undone without a hassle. However you identify, sharing this information with your male friends is a great way to spread awareness on the subject of birth control and easing some of the pressure of unexpected childbirth off of women’s shoulders. What do you think about Keith’s decision?