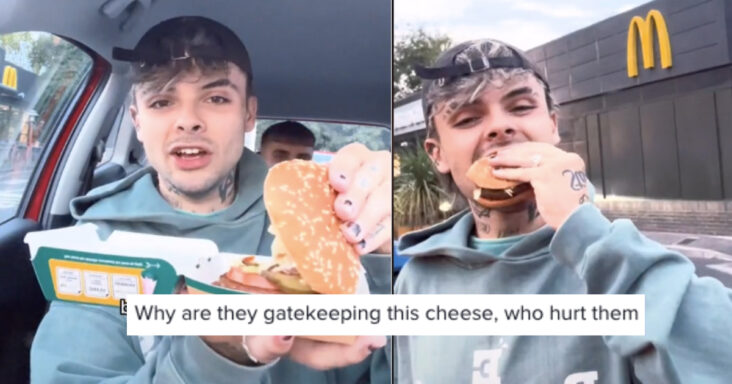 What’s so hard about getting cheese on your burger?

That’s what Louis Wright, a vegetarian and TikToker (@itsyourboylouis), wondered after he tried to order a slice of cheese at a U.K. McDonald’s and ended up in an absurd negotiation with employees there (scroll to the end for the full video).

It all started when he went to the drive-thru and ordered a vegan McPlant burger. (If you’re wondering, the McPlant is only available in a couple of select locations in California and Texas in the U.S.)

So far, so good. Then he threw them a curveball and asked for regular cheese instead of vegan cheese on the burger.

But the employee wouldn’t do it, saying that doing so “goes against the whole vegan thing.”

Wright didn’t give up. He asked for a slice of cheese separately. He even offered to pay for a whole cheeseburger to get a piece of regular cheese.

And here’s where it gets weird. The employee initially agreed, but then her manager stepped in and refused.

His reasoning? Because he knew Wright was going to put the regular slice of cheese on the vegan burger. The horror! People making Frankenstein vegan/vegetarian McPlant abominations!

Wright was dumbfounded as the manager explained, “Because if you plaster it all over social media, I’ll get fired. I’ve got a wife and kids. I’m not getting fired over a slice of cheese.”

On one hand, we kinda get it. The manager was clearly following instructions from corporate. And if you have a family that you’re providing for, you obviously want to keep your job.

But on the other hand… come on.

This was apparently the second time Wright had tried to get regular cheese on his McPlant, only to be denied both times.

Not to be deterred, in a follow-up video he tried yet AGAIN to get some regular cheese. And this time the employee (who had seen his videos), agreed to sell him the regular cheese separately.

McDonald’s later apologized, telling Newsweek: “Our McPlant is a Vegan Certified product, and we understand that the team member was following our advice to restaurants, which is not to customize the product with non-vegan ingredients to protect its integrity.”

They added: “However, we accept the guidance may have been misinterpreted on this occasion, and the restaurant team have been made aware. We’d encourage the customer to contact our customer services.”

A spokesperson added that “We apologize that the customer was disappointed with their experience on this occasion.”

Commenters were stunned at the whole ordeal.

It was quite the saga to accomplish something that should be routine at a McDonald’s — getting cheese on a burger. Anyway, here are the videos so you too can see the entire absurd affair.