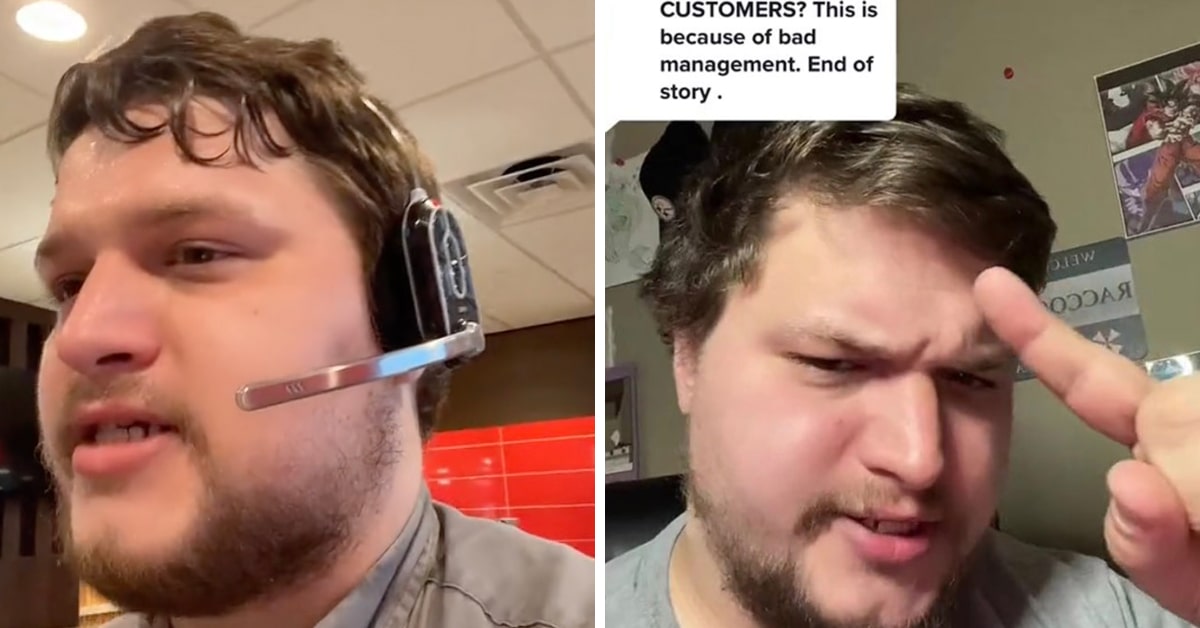 Being the boss is an incredibly hard job, but it’s incredibly important to set up an environment that is healthy and supportive of all employees.

A now-viral TikTok video of a McDonald’s manager ranting about how he was forced to run the breakfast shift alone has raked up nearly 2 million views and tons of comments debating who was to blame for the no-shows.

I got here at 3:50 or 3:30 to get an early start of the day, to get things ready, to get the system open. Because I was told yesterday, you’re gonna open, you’re gonna do food safety, yadda yadda yadda. I’m like, okay, cool. All right, I can get that done.

The manager explains that he got there a little earlier than the 4am call time to open at 5. No one was there, but he figured it was fine, he’d just get things ready.

And I made a joke to my GM ‘Hopefully, people show up” and he’s like “Yeah.” And as you noticed, there is no employees. Because I was supposed to have three at 4 o’clock. One is the maintenance guy. And two are employees that help me open and cook breakfast and stuff like that.

But 4am rolled around and nobody showed. Nobody called.

This manager did everything alone with some help from a maintenance guy, who is the most stand up dude of all time.

At 6:15 three other employees are supposed to be here. Surprise surprise. So far there are no calls, no show. Um, so yeah, hopefully my store owner, the owner of the store doesn’t come in because I’m gonna get my as reamed. Then I’m gonna ream their a*es. Not the owner, the employees.

I’m gonna ask the GM how to write people up. I’m not familiar with that. I know how to do everything else. Because I’m gonna write every single person up for not coming in, not showing up because it’s f**king ridiculous.

Furious, the manager says he now has to write people up because he did everything alone.

I basically had to do everything by myself. But the days I come in to help them, there’s employees, but the day I open up, there is no employees. So what the f**k? This is ridiculous. I’m sorry for cursing in a uniform, but I’m pissed off. Anybody would agree with me on this.

As is won’t for the internet, the comment section popped off with assertions about things they do not know. Most of the comments criticizing the manager revolved around “you’re a bad manager then.” So OP posted a follow-up video.

So this comment they just posted, honestly doesn’t make any sense to me. Because every week, my general manager prints off things, reviews of the store, like if it’s 20, 30, 40, whatever, he prints it off, so everybody can see them.

And a lot of employees who work there, I meant, not work there, a lot of the customers that come through, see the almost the same employees every day, know us by name, and give us compliments. Of course, there’s some entitled people, blah, blah, it wasn’t good enough and give us a bad review.

Yes, there are companies that have bad management, people leave, but we do not, we give reasonable hours and reasonable pay. So if anybody’s to blame, blame employees for not being on time. And it’s not management’s fault that people didn’t show up in the morning and want breakfast.

Some people don’t want to eat McDonald’s every morning, or some people have their own breakfast, or they’re not awake yet. So just because there was no customers, doesn’t mean bad management. So, end of story.