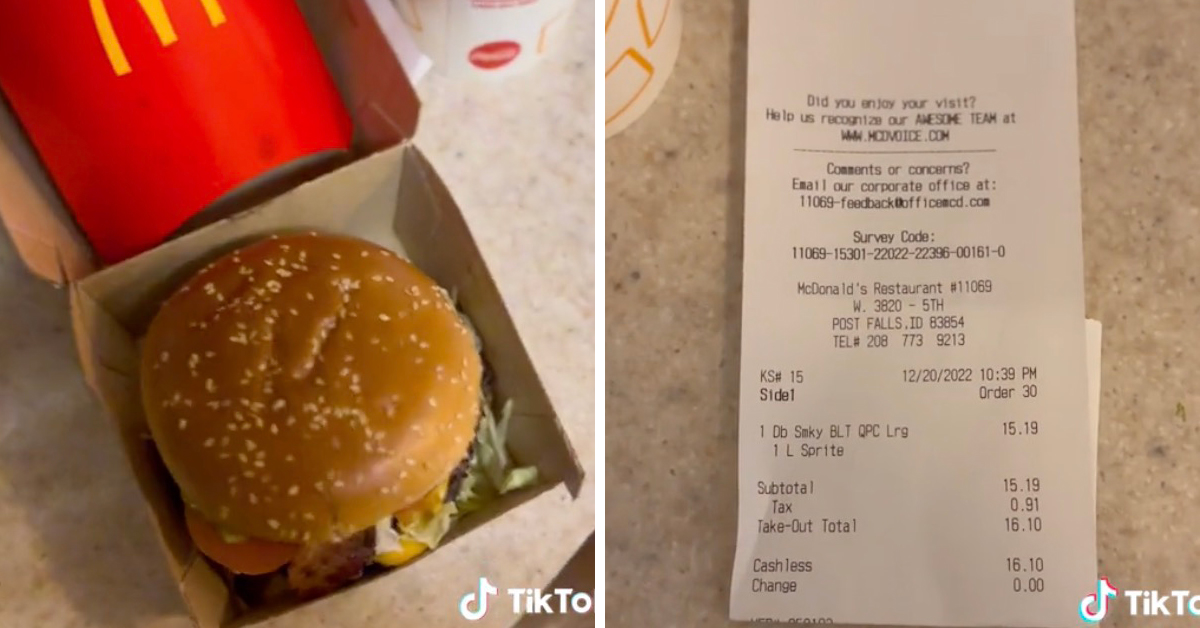 A TikToker recently shared a video sharing his shock at the prices of a McDonald’s meal lately and I have to say: I get it.

Inflation, inflation, inflation: it’s slowed, but once companies realized we’d all pay X amount of money, do you really think they’ll ever go back? Absolutely everything is far more expensive than it was a year ago and — pure speculation here, I’d love to be wrong — I can’t imagine it ever falling back to where things were.

Food, in particular, has been astronomical.

A TikToker posted a meal he bought at McDonald’s and the sticker price shock he got.

Topher (@topherolive) showed the deluxe double quarter pounder with bacon, large fries, and a drink, then followed up with the total price. $16.10.

“I get there’s a labor shortage. I get there’s wage increases and a number of other things, but $16?” asks Topher.

A few people noted that that was one of the priciest items on a McDonald’s menu.

“Bc you got DOUBLE DELUXE BACON quarter pounder,” said one person. “Literally the most expensive option on the entire menu.”

“Bro ordered the most expensive meal they have and acted surprised,” wrote another.

When a very reasonable person wondered: Hey, Topher, why didn’t you just drive away? Topher answered with the honesty of all “influencers”: “I thought it would be a good video.”

According to Topher, because he eats “90% from food I cook”, the high prices “really shocked [him]”.

“Sit down restaurant it is for that price!” said one shocked commenter.

“Companies know they can get these prices now so they’ll never go back,” said a second, mirroring the genius at the top of this article (me, it’s me), “doesn’t matter who’s in office.”

“It’s officially not convenient or affordable anymore,” wrote a third person. “Might as well go to the store and buy hamburger meat.”

Another wrote in, “Yes we have experienced the same thing. the food isn’t bigger or better. We will be hav[ing] more home cooked meals. my wages didn’t go up.”