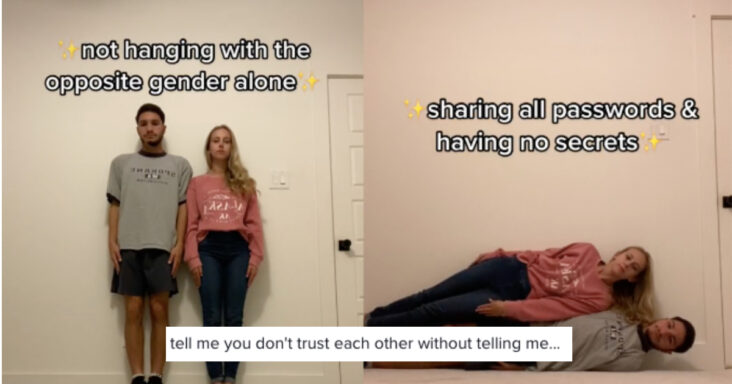 Every married couple has rules for their relationship. Like “take out the trash” or “don’t cheat.”

But Jaden and Andy McGrew (@jadenandandy) have taken it to the next level (scroll to the end for the full video).

In a TikTok that went viral, the couple listed their rules for each other. Those include sharing each other’s passwords, their locations on their phones 24/7, not keeping secrets — and no hanging out with the opposite gender alone.

Now some of these make sense. It’s probably not a great idea to keep secrets from your partner. But sharing your location with the other person at all times? Feels a little Big Brother-ish.

The couple apparently got some backlash, because they captioned their video, “Did not realize these would cause such a fuss on tiktok.”

But the comments we read were pretty split. Some supported the couple.

Turns out, though, lots of couples have similar rules.

A Pew study found that 67 percent of Internet users in a marriage or committed relationship have shared the password to one or more accounts with their spouse or partner.

It also found that 27 percent of Internet users who are married or are in a committed relationship share an email account, and 11 percent share a social network profile.

But some psychologists say that sharing passwords and accounts doesn’t necessarily mean that you’re in a trustworthy partnership.

“I am not in favor of using password sharing to prevent you from doing things,” she said. “Just be careful in your relationships.”

Here’s the full video. What do you think?