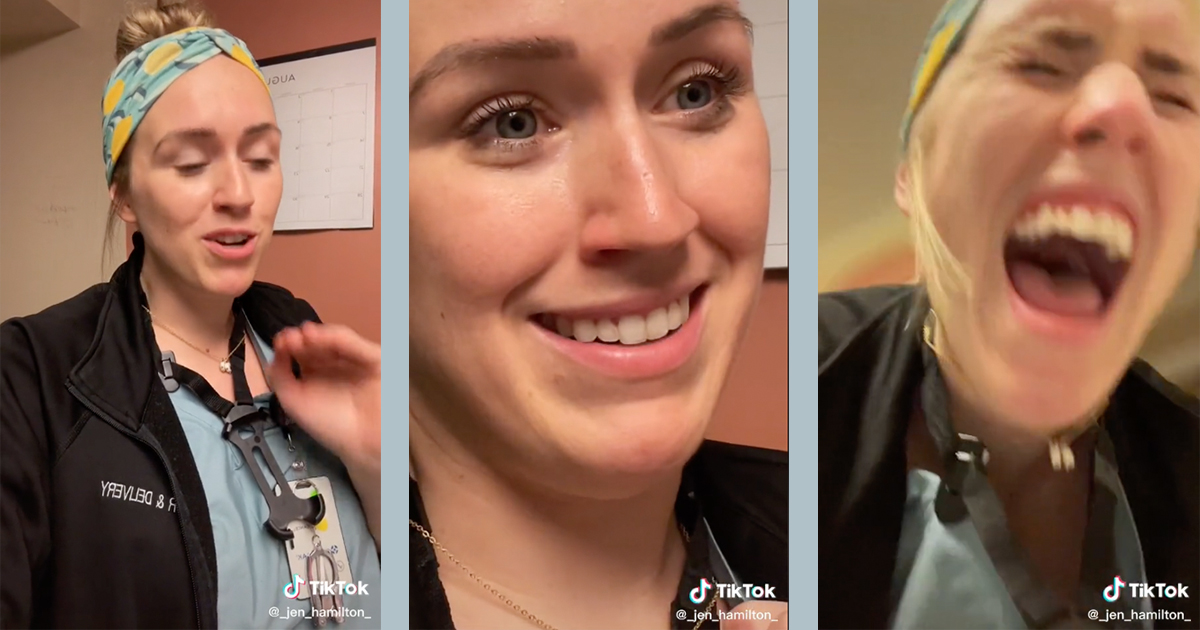 You’re definitely lying if you claim to have never had some embarrassing moments with food. We all have sniffed a milk carton a little too long, or cut off the edge of some moldy cheese to justify using that last slice, afterall, cheese is already mold…right?

Whether you’ve stooped down low for food or not, though I’ve never met anyone who hasn’t, you’ll enjoy this woman’s horrific and hilarious tale from her break room. TikToker Jen Hamilton (_jen_hamilton_), decided to spill the beans after she unintentionally did something very embarrassing, and later on regretful, at her work place.

Like many, Jen certainly does, and when her coworker announced that there were leftovers from a party in the break room, Jen said “Free food? Don’t have to tell me twice!”

She began her video clip by stating: “I’m about to tell you something so embarrassing that I lied directly to my friends at work today because I could not bear to admit what I had done. So, if you’re watching this and you work with me: surprise. I lied. So yesterday, I was working, and somebody says to me, ‘hey there’s food in the break room. Leftovers from a party, go get some food.'” Of course Jen hopped on this opportunity, as most would.

Jen went about the rest of her day normally, with a few complications at home. When she returned to work the next day, the horrid truth was revealed to her when her coworker asked her a very confusing question. Jen said,

“Today, I’m sitting at the nurse’s station and my friend Mary says to me, ‘Jen! Did you ever get your crock pot?'”

As the clues began to click in place, Jen did her best to keep her coworker from knowing the ugly truth. Her friend continued, “Well, it was in the break room, it was full of baked beans I found it on top of the fridge.”

“What?” Jen peeped out in response before busting out into laughter. Her co-worker then asked in horror, “You didn’t eat them, did you?”

“No!” the Tiktoker said, obviously lying.

The TikTok racked up 762k likes and almost 6 million views!

Jen finished her video with a terrible revelation. She explained, “I ate my own baked beans that I had brought to a barbecue like a month ago. I had the most aggressive form of diarrhea last night, I did not know what was wrong with me. Now I do. And telling the story, I’m realizing I still forgot the crock pot.”

Viewers were cracking up at Jen’s story, but had some valid questions as to how she couldn’t tell the beans had been sitting on top of a fridge for over a month.

There’s a lot of unanswered questions to this scenario, but one thing that should be known, do NOT eat fridge leftovers unless they were actually IN the fridge!