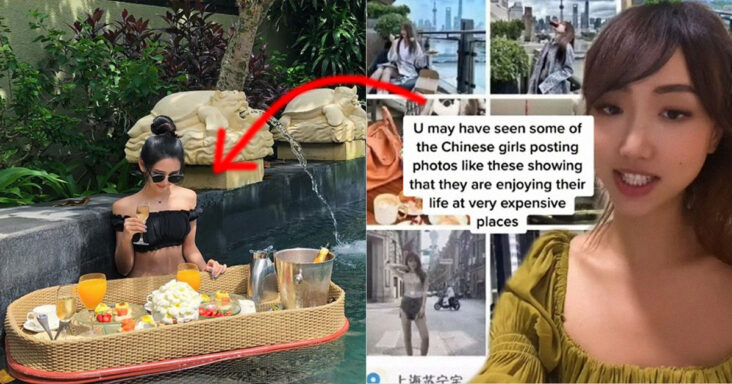 If by now you haven’t realized just how fake social media truly is, you need to re-evaluate. The majority of what we tend to post on our socials usually isn’t even half-way true, and we often judge ourselves too harshly through comparison of our lives to others. Just because it looks like someone has their life together, doesn’t mean they actually do. No one is perfect. no matter how many Instagram followers they have.

In a recent Tik Tok video by the popular user midiforreal, an in depth story was told that uncovered the facade of a social group of women called the “Bai Fu Mei” in Shanghai, China, which according to the video’s creator, translates to “rich and pretty girls.” These girls organized large group chats in which they would communicate and plan their next “fancy” purchase. The women in the group would split the cost of expensive amenities between 45+ people and pose with their extravagant luxuries for their social media accounts.

Midiforreal posted and compared photos from the Bai Fu Mei women and explained their entire operation.

You can watch the video in full here:

It isn’t uncommon for women and men to dress and present themselves to be wealthier than they actually are. This isn’t a bad thing either, because we’re all free to express ourselves in whatever way feels comfortable. Some spectators seemed to think the girls were wrong for faking their status, but who could they really be hurting? If you took the time to actually know any of them, I’m sure they would show you their true colors fairly quickly. Other viewers praised the girl group, saying how clever their operation was. Check out the captions below and let us know what you think!

Tik Toker’s had mixed emotions about the video: