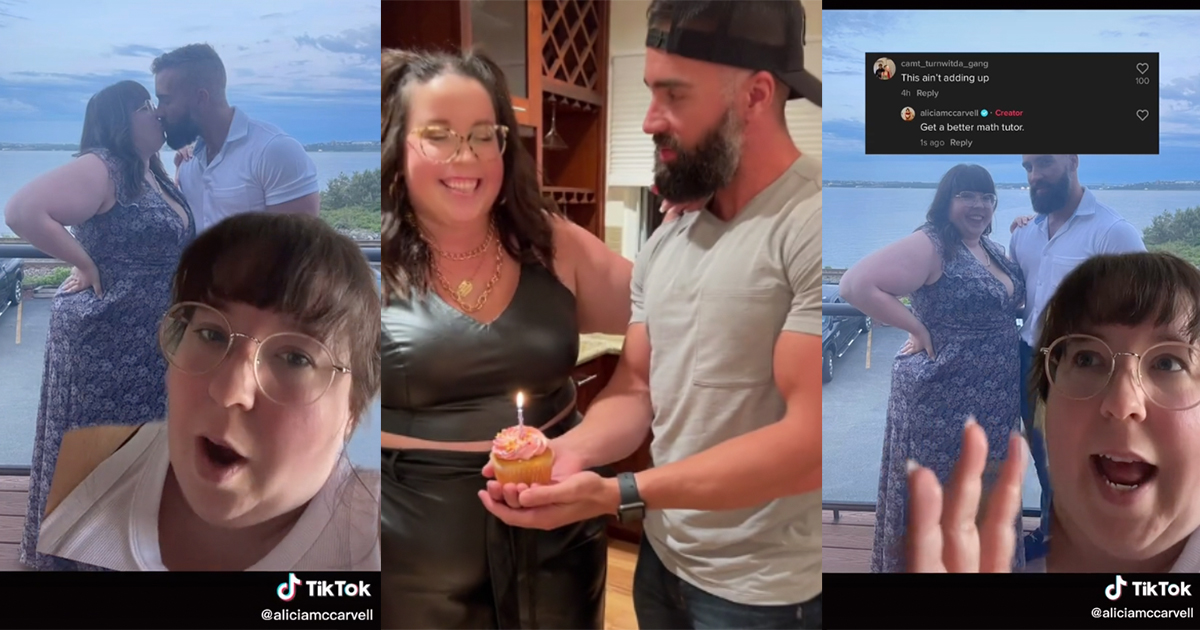 Even in today’s “advanced” society, people still like to belittle those who don’t perfectly match their pre-determined beauty standards. No matter how much we try to act like people are supportive these days, they typically aren’t, and unfortunately, the internet is the perfect hunting ground for those who are too cowardice to say insults directly to people’s faces.

Our moms weren’t lying when they said “They bully you because they’re jealous.” In fact, that may be the truest piece of advice my mother ever said. Insecurities are so easy to identify in people, especially when said person is projecting at someone who’s completely minding their own business.

Unfortunately for TikTok influencer Alicia McCarvell (aliciamccarvell), she was one of many to fall victim to some serious projections. After posting a video of her and her husband, Scott, dressed up for an event, a woman messaged her husband saying that ‘he should be with someone who looks like’ her rather than McCarvell.

People were cutting her down because of the rigid beauty standards that had been ingrained into them.

McCarvell, who has a whopping 4.9 million followers, posted the TikTok of her and her husband all glammed up and happy on Sunday. She posted a follow-up video, which detailed the message Scott received and the hate she got, on Tuesday.

In the second video, McCarvell explained that “by beauty standards,” she and Scott “don’t make sense,” and that the world values her husband more than her because he’s thin. Pretty messed up for someone to have to explain their own happy relationship, isn’t it?

In response to the hate on her video of her and her husband, McCarvell says that people try to either discredit Scott (one comment presumed Scott must be gay) or her (another presumed she must have hired him as an “escort”).

In her follow-up TikTok, McCarvell spit some facts at the haters.

Alicia graciously explained why people act the way they do towards her. She said,

We’ve been made to believe that somebody who is physically fit like Scott could never in a million years be in love with or compatible with a fat woman. That’s solely because the world has literally taught us that we have to value our worth on our bodies.

Viewers who are confident and secure in their own lives commended Alicia for her powerful words and congratulated her on having such a lovely relationship:

If you learn anything from Alicia and Scott, let it be that just because someone doesn’t fit your standards, doesn’t mean they aren’t happy. And a final word of advice from my mom, “If you don’t have something nice to say, don’t say anything at all!”