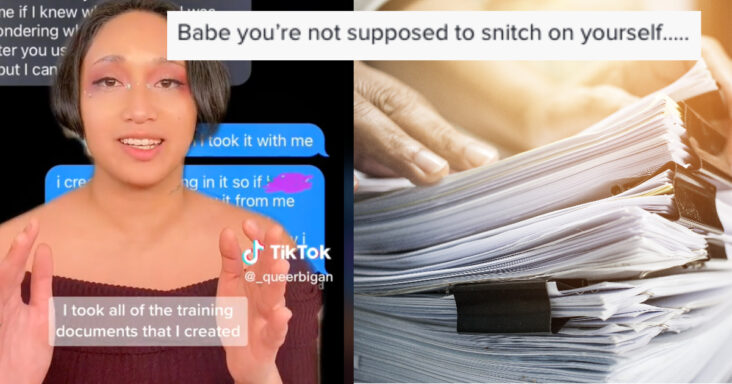 When you quit a job, should you take anything with you?

That was the debate after a viral video from TikToker @_queerbigan, who recounted the story of quitting her job and taking some documents with her on the way out (scroll to the end for the full video).

Here’s the story, in her words.

“It has been less than 24 hours since my last day at work,” she said. “On my way out of work, I took all of the training documents that I created because they didn’t have, honestly, a lot of things, digitally, physically, systemically, before me.”

She added: “And I was happy to provide those things. I loved my job…even though they were underpaying me for even the work I was supposed to do.”

Eventually, she asked for a title change and they turned her down, saying it would be “too confusing.”

She eventually quit in frustration and took the training documents with her.

Sure enough, a day after she left, they asked for the documents back (and she shared a text exchange that she had with a former colleague).

Was she within her rights to do this? Commenters had their doubts.

Others felt like she could be putting herself in legal jeopardy by talking about it online.

The video went viral, with more than 2.9 million people watching it. And the backlash prompted her to post a follow-up video, where she said that she doubts the company will take any action against her.

“The situation is really not as crazy as you all are making it seem,” she said. “But thanks for thinking my life is exciting.”

Here’s the video and her followup.