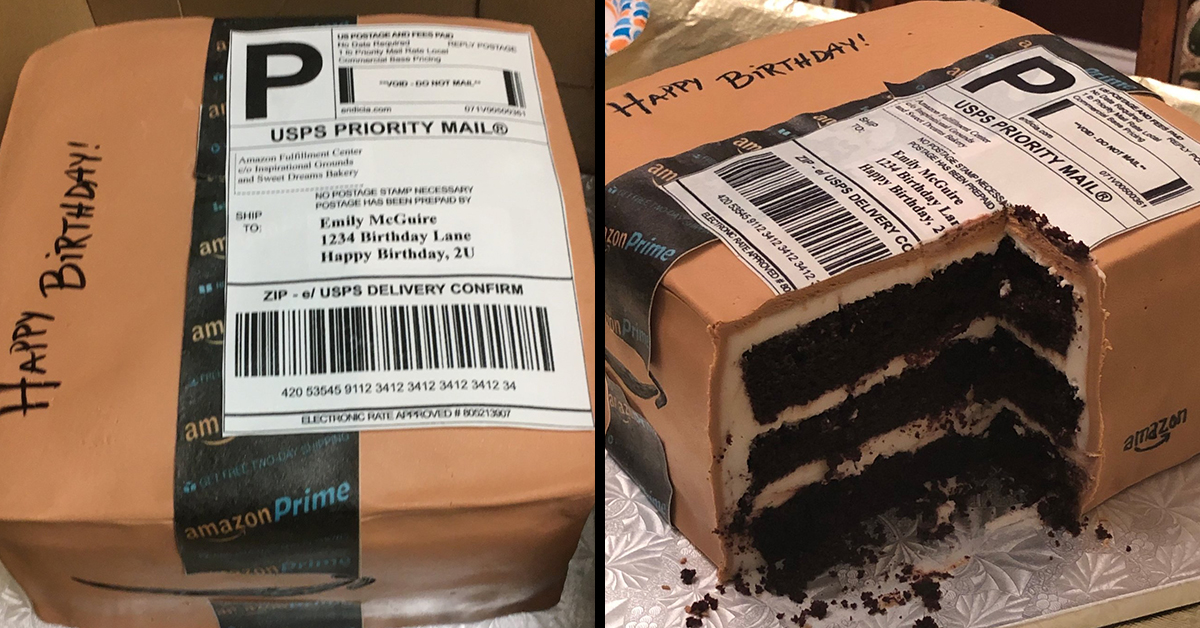 The allure of free two-day shipping is hard to resist. No one knows that better than Amazon Prime enthusiast Emily McGuire, whose husband recently surprised her with the perfect Amazon-themed birthday cake you have to see to believe.

McGuire, a longtime member of the e-commerce site’s subscription service who celebrated her birthday July 19, told Good Morning America that she frequently shops with Amazon.

“I can order anything from my coffee to my clothes,” McGuire said. “I find it super convenient and their customer service is amazing.”

The North Carolina woman is such a frequent Amazon shopper, in fact, that her husband, Waylon McGuire, brought home a cake this year in the shape of an Amazon delivery box — complete with shipping labels.

See the astonishing detail for yourself:

“I just laughed,” McGuire told GMA. “It was super funny because he makes fun of me for all the Amazon boxes we get.”

The impressively realistic confection even caught the attention of Amazon, which regrammed an image of the partially eaten cake and sent a few extra birthday presents McGuire’s way.

The cake was created by Sweet Dreams Bakery in North Carolina, according to Portland-area TV station KATU. Just this weekend, McGuire met the woman who made her birthday dessert.

The cake drew mixed reactions on social media, with many people lamenting the effects of corporate interests on consumers’ everyday lives.

That's not epic. It's a symbol of capitalism destroying the world, and we gobble it up.

Who the hell has such devotion to a company that they enjoy this?

Imagine suffering from that much consumerism

Others pointed out the ongoing controversy surrounding Amazon’s treatment of warehouse workers. Employees have accused the company of such egregious behavior as withholding overtime pay and forcing them to urinate in trash cans.

Neato… is the filling made from the tears of exploited workers?

Did he make her drink a water bottle filled with pee to symbolize Amazon employees' bathroom breaks?

Maybe try working for them, Emily

Her present was to have an Amazon worker toil away in the basement with the heat turned up to 100 degrees and pee in a bottle.

Personal feelings about Amazon aside, no one can deny the obvious skill that went into making McGuire’s cake. The only thing that would make it more impressive, really, is an affirmative answer to this very important question: