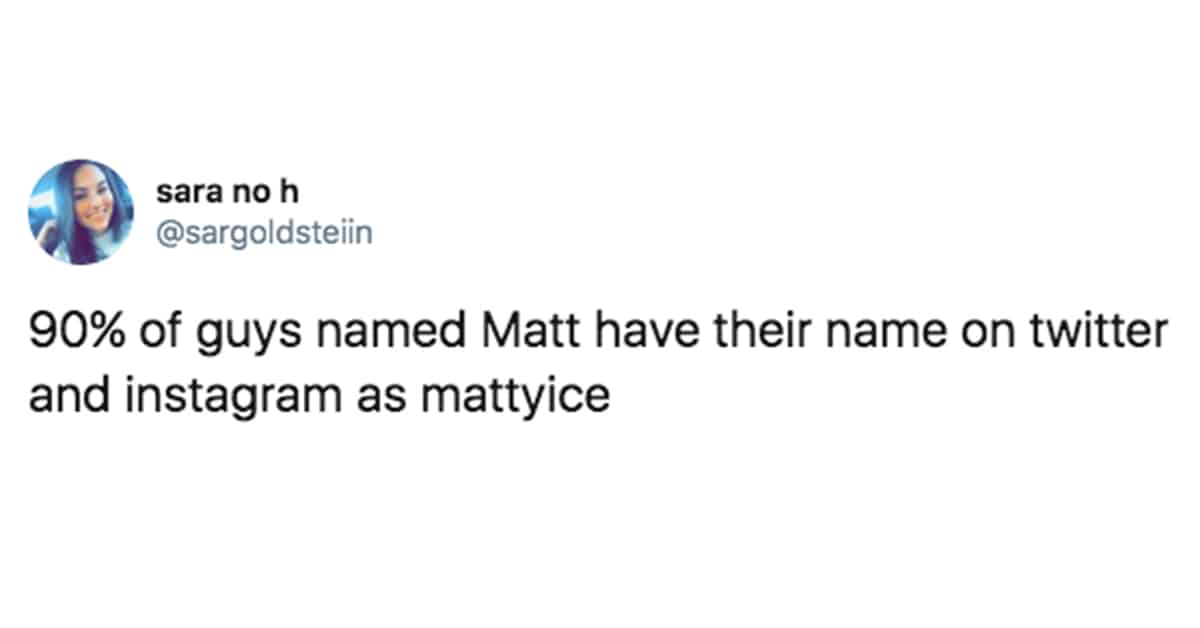 I went to high school with a guy named Matt. He got kicked out for taking horse tranquilizers, but in the months before that Matt was a real dick to everyone. I think he set the tone for all of the other Matts I’d meet in life. If your name is Matt and this offends you, of course it does. That’s such a Matt reaction to have.

in 2020 we are not talking to any guys named matt

my friend: so the new person you’re dating is another white guy named matt whose parents pay his rent?

me: yeah, but like, there’s something different about this one.

narrator: there was in fact not anything different about this one.

boys that will definitely ruin your life:

1. any boy named kyle
2. all matts
3. chads (or anything with -ad)
4. any variation of zachary
5. any guy whose name starts with j

have you or a family member ever dated a guy named matt. you maybe entitled to compensation

fun fact: ur body count doesn’t increase if u have already previously had sex w someone w that name. so for example, my body count this year was 1, bc even though i slept w 17 guys, they were ALL named matt.

what up we’re 5 White Dudes in a Band, this is our drummer Mustache SticknPoke, our bassist NailPolish Earring, lead singer Denim Glasses, and 2 guys named Matt. Altogether we have 3 famous dads, 6 DUIs, and 4 pics of us on a couch outside.Our EP ‘My ex is crazy’ out on bandcamp

Frat boys will find out you like Kpop and be like “WTF dude 12 guys in one group lol how do you tell apart they look the same” even though they had 4 white guys named Matt in their pledge class of 15.

i do believe i was put on this earth to systematically ruin the lives of white men by dating them, to ensure that guys named matt have full blown panic attacks every time they get a text message.

There’s too many guys named “Matt” at this Whole Foods.

When I am king, all welcome mats will be replaced by guys named Matt who lay down in front of doors saying “welcome” to whomever approaches.