Anyone with kids knows they love putting literally everything in their mouths. Cell phones, rocks, dog toys, shoes, water bottles, and yes — even toes. So when actor Armie Hammer posted an Instagram story featuring his two-year-old son Ford shrieking with glee and sucking on Hammer’s feet, social media users were strangely shocked and disgusted.

Hammer, known for his roles in Call Me By Your Name and The Social Network, posted the clip with the phrase “This happened for a solid seven minutes #footfetishonfleek.” Hammer’s wife, Elizabeth Chambers, can be heard laughingly saying “This is not normal” in the background.

Gossip blogger Perez Hilton included the video on his website, asking viewers to comment on whether or not the video was appropriate. This gave Chambers and opportunity to defend her family.

“It wasn’t seven minutes… more like five seconds,” Chambers wrote. “Our son likes to play with people’s feet and I put the video on our family stream because this phase is an ongoing joke.” 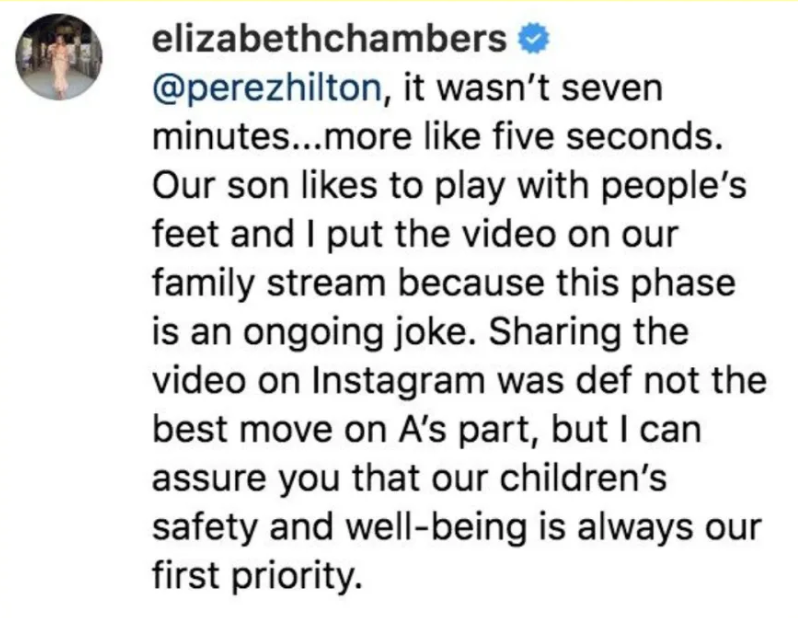 “Sharing the video on Instagram was def not the best more on A’s part,” Chambers added. “I can assure you that our children’s safety and well-being is always our first priority.”

The parent police were out in full force, commenting on how inappropriate the video was.

Some users joked about how feet seem to be a running theme for Hammer. “When I saw Armie Hammer is trending, I was worried it might be because he put his foot in his mouth, and well, I was close.”

armie hammer’s kid when he’s older and someone brings up the time a video of him sucking his dad’s toes went viral pic.twitter.com/JV0vdmlfF1

Other users commented on how outrage over the video was some “pearl clutching BS.”

Ok I’m gonna die on this hill: Armie Hammer def shouldn’t have posted that video, but I can assure you toddlers do a lot of weird fucked up shit and the parents clearly had a good sense of humor about it, so freaking out abt a few secs of toe sucking is pearl clutching BS

“Little kid sucking on a a parents toes is not sexual and way down the list of weird shit little kids do. Grow the f—k up everybody.”

Little kid sucking on a a parents toes is not sexual and way down the list of weird shit little kids do. Grow the fuck up everybody. #ArmieHammer

While “#footfetishonfleek” is not the best choice for a hashtag, the truth is parents share all kinds of weird child-related stuff on social media. Hammer’s kids look healthy and happy, and that’s what matters.