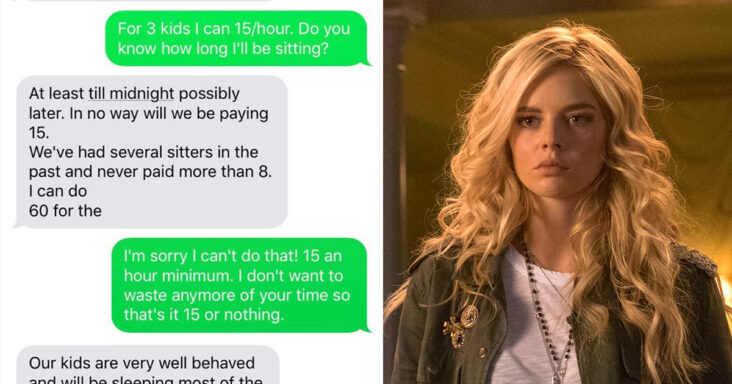 If you’ve ever had to babysit, whether it was over younger siblings or family, or the children of complete strangers, you know it’s not an easy task. Not only do you have to make sure the little hooligans stay alive by the time their parents get home, but you have to feed, change, and keep them entertained.

In today’s day in age, children can tend to be a little more misbehaved than they used to be. I don’t know about you, but I would definitley want to be compensated for the stress that comes with taking care of snobby little kids.

Recently, a Reddit user by the name of “Alice,” hopped on the ChoosingBeggars subreddit to ask if she had handled a baby-sitting debacle appropriatley. On a last minute request, a mother asked if Alice could watch her twin 3.5 year olds and a two year old who “weren’t potty trained.” Despite it being short notice, Alice said she would be happy to help, if she could be paid $15/hour for the 3 children.

The text exhange was as follows:

Alice asked for a reasonable rate to watch three toddlers. The mother of the children basically laughed in her face for even suggesting $15/hr.

The mother thought that Alice shouldn’t have been asking for such a “steep” price because her kids are well-behaved and would’ve been sleeping all the time. Anyone with a brain knows this is not accurate information and that her children will probably be crying, shit-covered terrors the entire night.

Based on the mother’s attitude, it can also be assumed that these children may not have been subject to the best parenting. Any adult who doesn’t think a $15 wage isn’t proper in today’s economy is unfair and unreasonable. Alice held her ground and didn’t give in, and showed that her pride and dignity were worth more than 2014’s minimum wage.

Check out some of the reactions from the Reddit community below: