Bernie Sanders has a lot on his mind. What to wear isn’t necessarily at the top of his agenda. He’s trying to get through the day without completely losing his mind over what other politicians are doing.

That’s why, even when he shows up at a big event like Joe Biden’s inauguration, he looks like he’s at an outdoor middle school talent show he was forced by his family to attend. That’s the Bernie way. He hasn’t enjoyed anything since the early 70s when he was writing folk songs in Vermont.

The good people of Twitter saw this grumbly man and had a lot to say.

Here are the funniest tweets about Bernie Sanders at Joe Biden’s inauguration:

2. “These creatures are my family.” 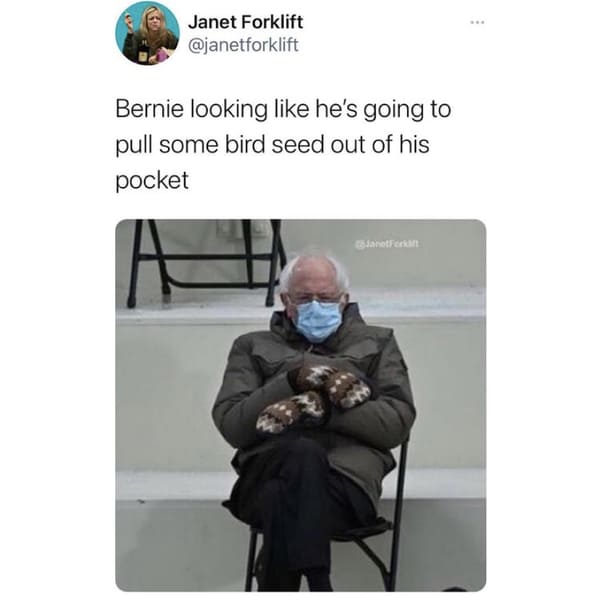 Bernie is on his way to the post office. pic.twitter.com/prPPlqprqs

Bernie’s got the green new deal in there.

He wanted to hand deliver it on day 1. https://t.co/oebVjbFA2v

In Jewish yoga this pose is: waiting for my wife at Loehmann’s pic.twitter.com/Qik7wsZ0ad

Me waiting for my boyfriend to give me attention pic.twitter.com/2GnpbAuTy8

Out on the town having the time of my life with a bunch of friends pic.twitter.com/Qu7UpVTKgQ

Bernie’s all about promoting his Etsy shop. pic.twitter.com/44juzWPAT6

Bernie out here like he’s camping for a FCFS release pic.twitter.com/DIDEnrN6LN

“I am once again asking for a space heater.” https://t.co/2PmfOWFGYE

Bernie looking like “this could’ve been an email.” pic.twitter.com/Dacef6o7PE

If lady Gaga is serving mockingjay than Bernie is serving district 12 vibes pic.twitter.com/7Bu6GVsc0e

Waiting for my mom in the car after she said she’d just be a few minutes. https://t.co/CpslnUx3OF

my guy bernie clearly thought it was just gonna be a zoom inauguration pic.twitter.com/KyJXUw9VFh

Bernie at the inauguration pic.twitter.com/Ly5x4Gt4uH

When Garth Brooks asks you to sing along. pic.twitter.com/gkfRYpWFt3

This is literally the happiest Bernie has ever been. pic.twitter.com/XuD66SOKok

When she makes you go to brunch during a pandemic. pic.twitter.com/eJcvFUIcLU

Bernie Sanders: “How long are these games? My feet are chilly.” pic.twitter.com/pGcInw8Gpv 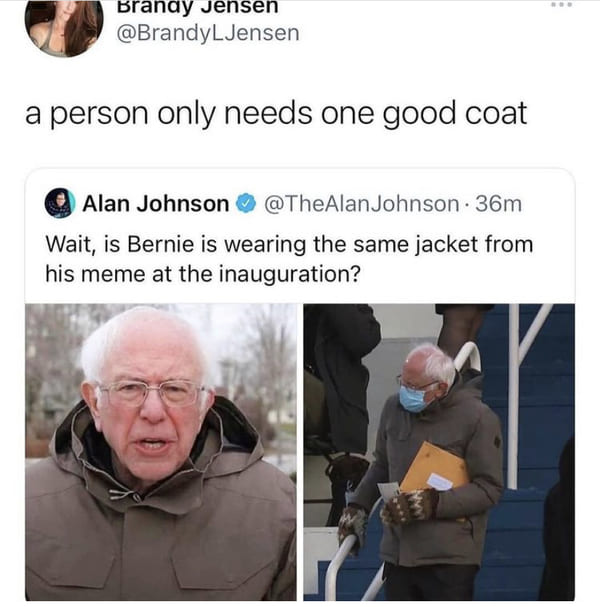 Bernie’s mittens are made by Jen Ellis, a teacher from Essex Junction, Vt. She gave them to him 2+ years ago and was surprised when he began wearing them on the campaign trail. They are made from repurposed wool sweaters and lined with fleece made from recycled plastic bottles. pic.twitter.com/ErLr29lY2t