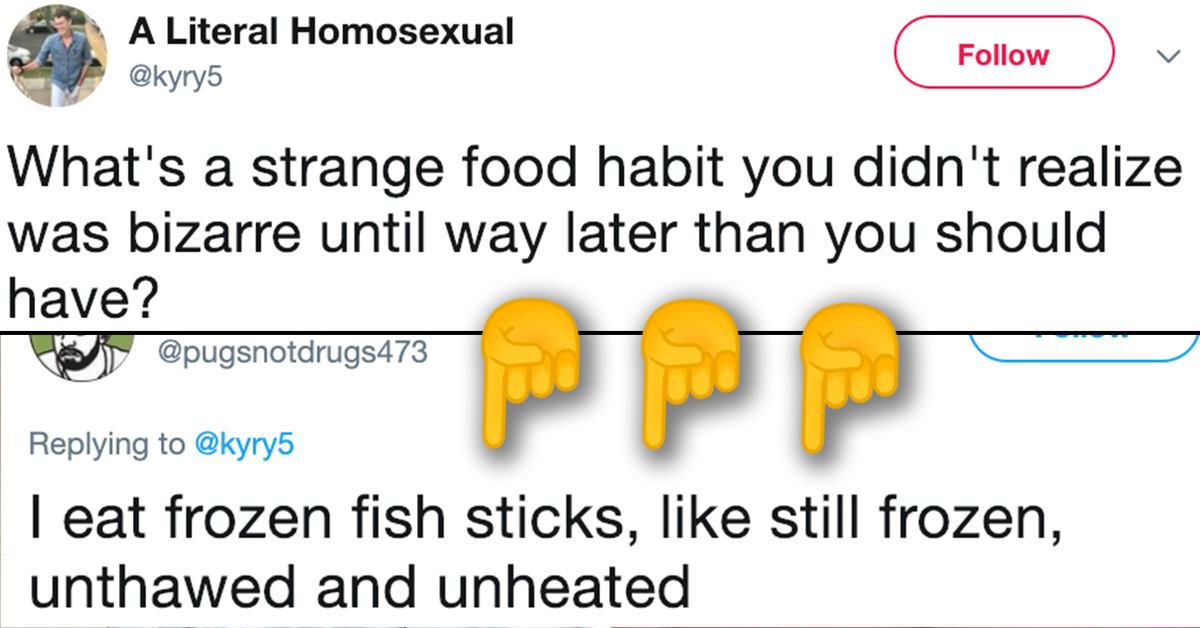 “What’s a strange food habit you didn’t realize was bizarre until way later than you should have,” he asked, before offering his own: “My dad raised me to butter my Pop-Tarts and I had no idea that was ASININE (“extremely foolish or stupid”) until someone saw me do it in college.

What's a strange food habit you didn't realize was bizarre until way later than you should have?

Of course, buttering a Pop-Tart is far from asinine—especially a Brown Sugar Cinnamon Pop-Tart, which is the flavor OP preferred. But as much as I’m inclined to say “to each his own,” particularly when it comes to food tastes, it’s difficult with this list because nearly everyone on it—NOT ALL, BUT MOST—are just plain wrong. WRONG.

(Granted, I eat mashed potatoes with soy sauce, so who am I to talk?)

Dry ramen noodles. Sometimes I would take a pack, separate the two chunks and put Vienna sausages between, like a sandwich.

Not a terrible favor, if you can get past the incredible bulk and crunch !!! pic.twitter.com/uVEaL3Xj4F

My dad raised me on a dish called bologna dunkers which is just eating a package of bologna and dipping it into a bowl of ketchup. My wife was not amused.

I used to eat the whole edamame, shell and all. Until I was at a nice restaurant with some people and they wondered where my discarded shells were and asked if I’d been throwing them on the floor….. me:[mouth full of shells] “uhhhhhhh”

When brownies come out of the oven while they’re still hot, we’d put like three of them in a cup of milk until you could spoon out… lukewarm brownie and milk soup I guess

I use to melt cheese on a plate, let it congeal then peel in off and eat it. Ok, I still do it sometimes

Oh also my dad (RIP) and I would eat tomato soup with so many saltines in it it became like a bowl of tomato soup/saltine mush.

One time I ordered a glass of milk and a margarita at a bar, at the same time…everybody there thought it was weird and gross

I like to mix cottage cheese and apple sauce. People are disgusted, but the shit is delicious!

I used to take slices of bread and smash them together until they combine to make a “bread ball.” Sometimes if I wanted some flavor I would stick a slice of cheese in it before mashing it all up.

My sister and I put cheese on a plate and microwave it till it’s a little crispy. Didn’t know it was weird till I was in high school.

My dad raised me to butter my brownies.

I stuff mashed potatoes + corn in buttered biscuits. I put sour cream on a lot of stuff, including but not limited to pizza, fries and chips (usually Doritos or spicy cheez-itz), chicken tenders, and hashbrowns. Also occasionally eat ketchup on crackers.

my mother always put potato chips in our PB&J’s, but for a while I didn’t like peanut butter so I would just have soggy jelly sandwiches held up by the chips. also dipped my chips in chocolate pudding like a true model of ~health~

we did this at restaurants. in public

31. And finally, this most heinous of food sins:

I put the milk in the bowl before the cereal, which is the more logical way to do it because you can keep adding cereal and they stay crunchy. My wife hates it. I think I’m right. Don’t @ me.