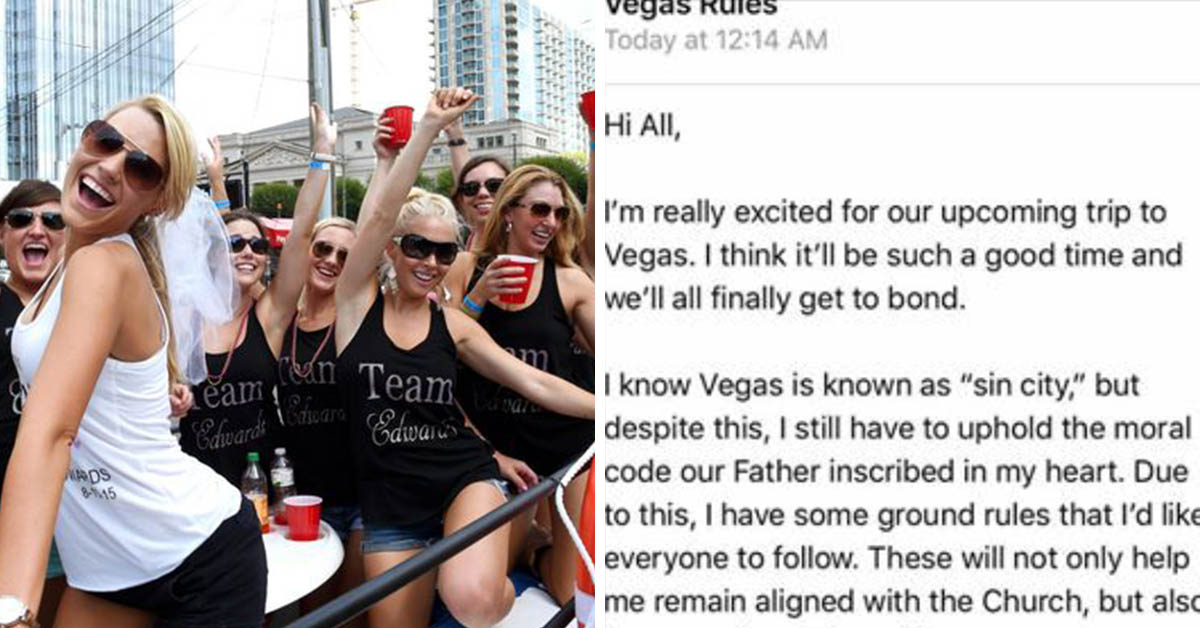 If a bride, groom, or bridesmaid acts out—you best believe it’s going to get exposed on social media, and people are always down for a wedding disaster story.

The latest in the ridiculous stories about weddings comes from Imgur user UrsulaIMeanVanessa. She posted photos of an email she received from anotherwoman in the bridal party who was invited to the bachelorette party in Vegas. Originally the Imgur user said this woman “wasn’t invited” on the trip because she’s a total “womp womp” downer, but she bullied her way into getting an invite (which seems pretty psycho on its own).

Then, the bachelorette bully proceeded to send an email filled with “rules” for the entire bachelorette party’s trip to Vegas. And, it’s absolutely f**king insane.

So, let’s break it down, shall we?

Basically, she found a church to go to in Vegas on Sunday—she even told the Pastor of the church to “expect them.”She also said that there would be “no liquor” in the hotel room at all because they could fall off the balcony and die (which sounds much better than staying with this woman anywhere). She also said that no one could have any sex on this trip—none, zero, zilch. No drugs—not even Adderall.

On top of these demanding rules and regulations, she’s also insisting that everyone in the bridal party who is attending the trip to send her $50 each, because she “plans on spending $900 on groceries—nine hundred dollars.

People on Twitter were blown away that this woman would force her way into the bachelorette party and then demand that everyone follows her rules—and she’s not even the bride!

SHE'S NOT EVEN THE BRIDE

Others said they would want their bachelorette party to be the exact opposite.

Ok so take all of these rules and reverse them and that’s how I plan a bachelorette. https://t.co/MsQPQro2yM

Some hoped that the rest of the party kicked her a** to the curb.

Clearly the focus is on crazy, but can we also discuss a 6 day, 16 person bachelorette??? GTFO with that nonsense! Is this going to be Emma’s only trip EVER? Why are these women entertaining this?

I really hope someone just replied "No." and nothing else.

And plenty of people were dying at the language she used.

Lmaoooooooo “with courteous passion” who the fuck is this psycho? 😂😂🤣🤣🤣😭😭 https://t.co/XkOCKRuMxE

And her outrageous rules.

She told the bridesmaid with ADHD to leave her “methamphetamines” at home 😭🤣 https://t.co/C2z8ojlVd1

Some wanted to use this for actual good.

Also—the burning question we all have…

Honestly, everyone on Twitter (and everyone over here) wants to know what actually went down. Someone, please give us a follow-up.