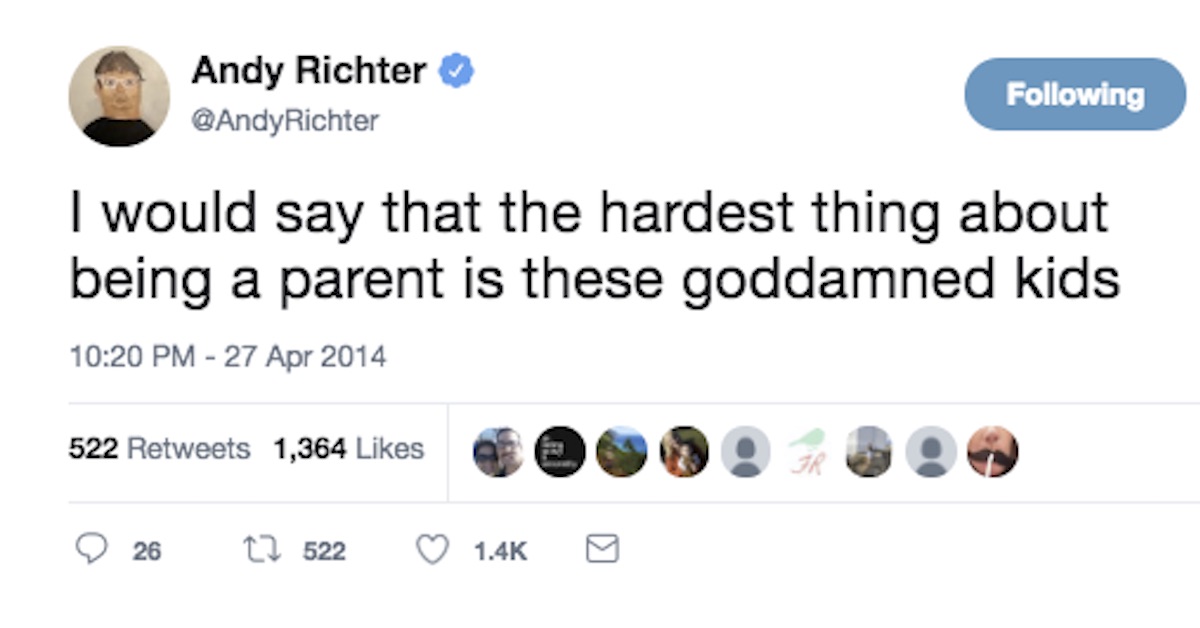 Raising kids isn’t easy, even for the rich and famous. In fact, this might be the one place where stars really are just like us—they’re at the mercy of the whims of their children. Taken hostage by tiny people who refuse to reason!

These celebrity parents on Twitter know what you’re going through and have gone through it themselves. With the exception of having tons of money, these parents really do know the struggle of parenthood.

1. Much like you, Olivia Wilde also knows the value of being able to sometimes just plunk the kids in front of the TV.

I can honestly say I love my children more now that they’ve discovered the movie Elf.

2. And like you, Pink made a big deal out of her baby’s first swear.

3. Like you, Christina Applegate knows about being too busy to shower.

wonder if the teacher at the kid's school knew I hadn't showered for a couple days at pick up. Sure the car smelled lovely #dontcareimgross

4. Like you, Conan O’Brien worries about that his kid watches.

I’m on the fence about this new LEGO Ted Bundy movie.

5. He maybe worries a little too much.

Can't believe there's a 3rd "How To Train Your Dragon" movie – this better be the one that actually shows me how to train my f*cking dragon.

6. Like you, Reese Witherspoon has posted some #mom humor.

Imagine if we could all accomplish as much as unsupervised toddlers can… 😂 #momlife #momhumor pic.twitter.com/Gil5ZqfOGu

7. And like you, Channing Tatum’s got some #dad jokes.

I know I've got a blockhead…I never knew I'd have an actual blockhead for a child lol. pic.twitter.com/8RyuZZUX1h

8. He’s also been in awe of his own kid’s coolness.

My daughter giving the lone 🤟sing at her school assembly today just confirmed what i already knew. She cool AF! I’ll never come close to how cool she is. Proud & feeling pangs of dad dork growing. Just look at this pic if you ever need help. It’s done a lot for me. Ok good night pic.twitter.com/MgMPvYCHti

9. Like you, Serena Williams has cracked up at her kid.

So my baby is now making phone calls. She picks up the phone somehow gets to dialing and puts the phone to her ear. She than says “oh”. I’m like she’s only 17 months!!!!

10. Like you, Kelly Clarkson sometimes just has to laugh.

I asked Remy to take a picture next to our Christmas tree. He knows he isn’t supposed to touch the train that goes around it, but the smile along w/the mischievous look in his eye because he knows he’s not supposed to be touching the train is hilarious and I couldn’t get mad 🤣 pic.twitter.com/vvSOqDEUYE

11. Like you, Cardi B is over the constant diaper changes and doesn’t find them one bit charming.

I will forever hate changing diapers 😩😩🤮🤢

12. But she does love to try to decode her baby’s babbling.

13. Like you, Carrie Underwood couldn’t sleep even before the kid entered the world.

Please go bother someone else…like dads. Go bother dads. My husband sleeps so soundly and peacefully and I’ve been awake for 2 hours (so far). How is this fair? Imma lose my mind! 😩🤪🤯💩

14. And like you, she eats mostly lives off her kid’s leftovers.

15. Like you, Lin-Manuel Miranda is impressed with his kid’s use of language. Sweaty impressed.

My son just invented a new phrase for when he doesn’t want to do something and it’s so damn good…
Me: Hey, do you want some breakfast?
Sebastian (shaking his head): I’m sweaty about that.
I’M SWEATY ABOUT THAT.

16. And he proudly watches as his kid soars above him.

My son wrote a song called
"I Just Want To Eat Bread Now."
I knew he'd surpass me but not so SOON.

17. Chrissy Teigen may be a cookbook author but that doesn’t mean her kid’s not a total fussy eater.

I made a restaurant for my 2 and a half year old pic.twitter.com/bqQ40bFQ4F

18. And she makes mistakes that come back to bite her on the butt.

I told Luna to “stop it” ONCE, months ago and now when she’s doing something she knows is wrong she screams DONT TELL ME TO STOP IT before I even say a word. As soon as it came out of my mouth I knew it would end me.

19. Like you, Dax Shepard is familiar with early morning rising.

My three year old decided to start "our" day at 530AM, and if a child-friendly version existed, I would have definitely tranq-darted her.

20. And like you, his wife Kristen Bell knows it takes a village to raise a child. And someone in the village has to make fun of the dads.

You're a wonderful father. https://t.co/E94PmfH0mN

21. Like you, Ryan Reynolds considers getting his kid a pet.

If my daughter proves she can take care of the Fire Ants I got her, we’ll get her the damn kitten.

22. And he remembers life before children fondly.

On our 6am walk, my daughter asked where the moon goes each morning. I let her know it's in heaven, visiting daddy's freedom.

23. Like you, Anna Faris has had some challenges with potty training.

24. Like you, Andy Richter wonders about the effect of too much screen time.

25. And like you, he’s always looking for a way to express the nuances of parenthood.