Colonel Sanders is a beloved brand icon played in commercials by people everyone feels cozy and comfortable with, like Norm MacDonald and Reba McEntire. But he isn’t made up to sell fried chicken, the way Tony the Tiger was made up to sell bandanas.

Sanders was a real guy who started selling fried chicken at his gas station in the 1930s. He franchised his secret recipe for Kentucky Fried Chicken in the early 1950s, allowing it to be sold at a large restaurant in Utah. He eventually had over 600 KFC locations. Overwhelmed in his old age, he sold his company for what would be worth over 16 million today.

But things weren’t entirely smooth sailing for the Colonel. Twitter user Rudy Mustang shared this little known story about Colonel Sanders that was originally published in Entrepreneur.com. He shot a competitor. 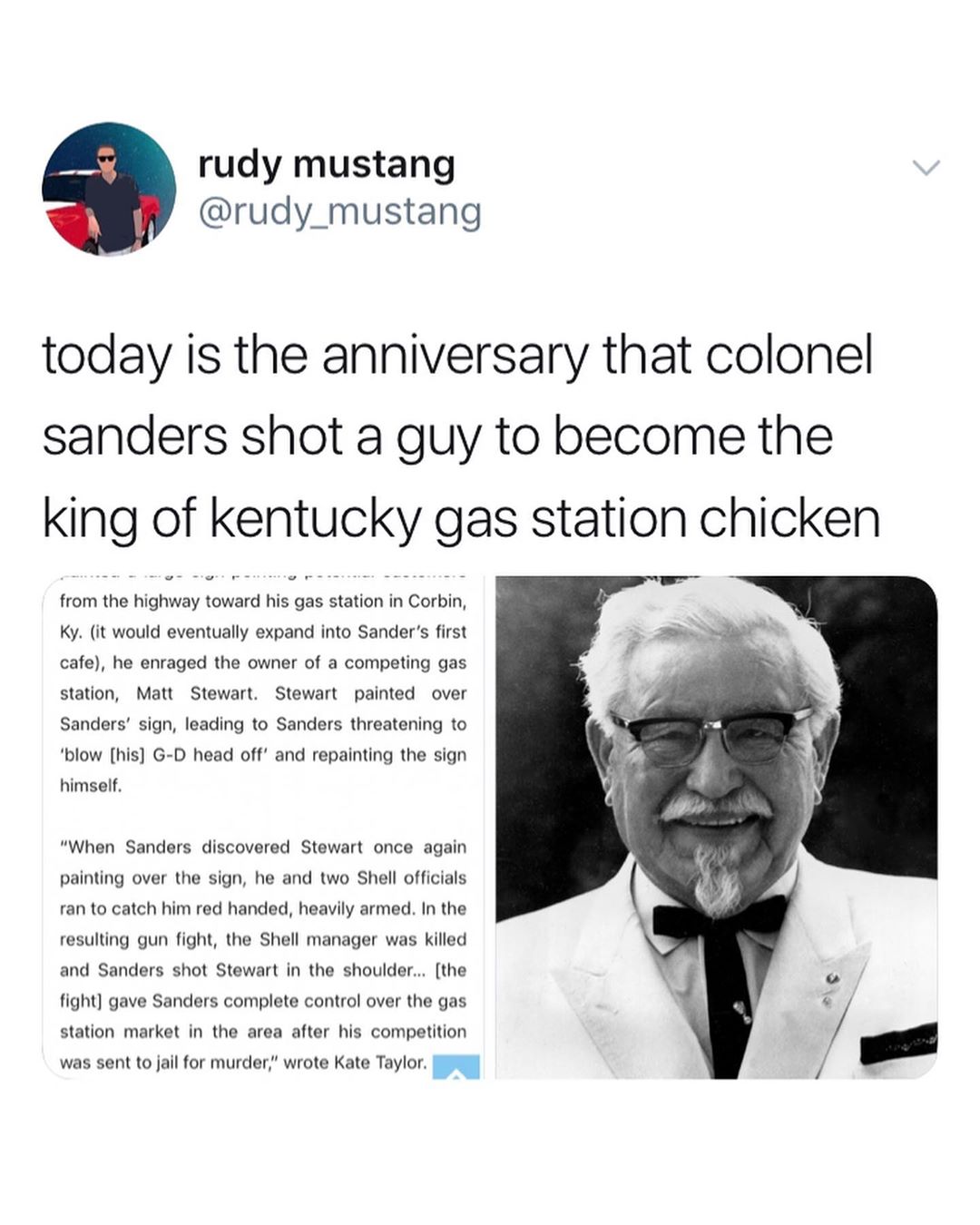 “What Sanders lacked in business skills, he more than made up for in passion. When Sanders painted a large sign pointing potential customers from the highway toward his gas station in Corbin, Ky. (it would eventually expand into Sander’s first cafe), he enraged the owner of a competing gas station, Matt Stewart. Stewart painted over Sanders’ sign, leading to Sanders threatening to ‘blow [his] goddamn head off’ and repainting the sign himself.

“When Sanders discovered Stewart once again painting over the sign, he and two Shell officials ran to catch him red handed, heavily armed. In the resulting gun fight, the Shell manager was killed and Sanders shot Stewart in the shoulder. KFC currently has a purposefully poorly acted reenactment of the fight that gave Sanders complete control over the gas station market in the area after his competition was sent to jail for murder.”

Next time you bite into a crispy drumstick, know that Mr. Sanders was not messing around. He wanted the world to enjoy his unique blend of spices and only his unique blend of spices and he was willing to fight for it. Another couple of fun facts I discovered from reading his Wikipedia page is that he hated the way KFC used his image after he sold the company. How could he hate this?

He also thought the chicken they made after he gave up control sucked:

“My God, that gravy is horrible. They buy tap water for 15 to 20 cents a thousand gallons and then they mix it with flour and starch and end up with pure wallpaper paste. And I know wallpaper paste, by God, because I’ve seen my mother make it. … There’s no nutrition in it and they ought not to be allowed to sell it. … crispy recipe is nothing in the world but a damn fried doughball stuck on some chicken.”

A man with strong opinions until the end. Hopefully no one argued with him about that.