Deputy Stacy Talbert of the McIntosh County Sheriff’s Office in Georgia posted an emotional two-minute video to her Facebook account about the stress she has been feeling as a police officer while the nation has seen protests in every single state against the racist violence that has lead to the deaths of countless Black men and women. Has she been feeling as though this violence is wrong? Has she been reconsidering her career in state oppression? What is leading to this complete meltdown?

Her Egg McMuffin at McDonald’s took too long:

good morning everyone please watch this, i know it’s heartbreaking to see but it must be seen. lmaooooo jk it’s a dumb white cop crying about their mcmuffin being late have a good day everyone. pic.twitter.com/bFCm4B11HR

It seems like the deputy is convinced that people are going to mess with her eggs in retaliation for wearing a badge and carrying a gun into a McDonald’s drive-through. 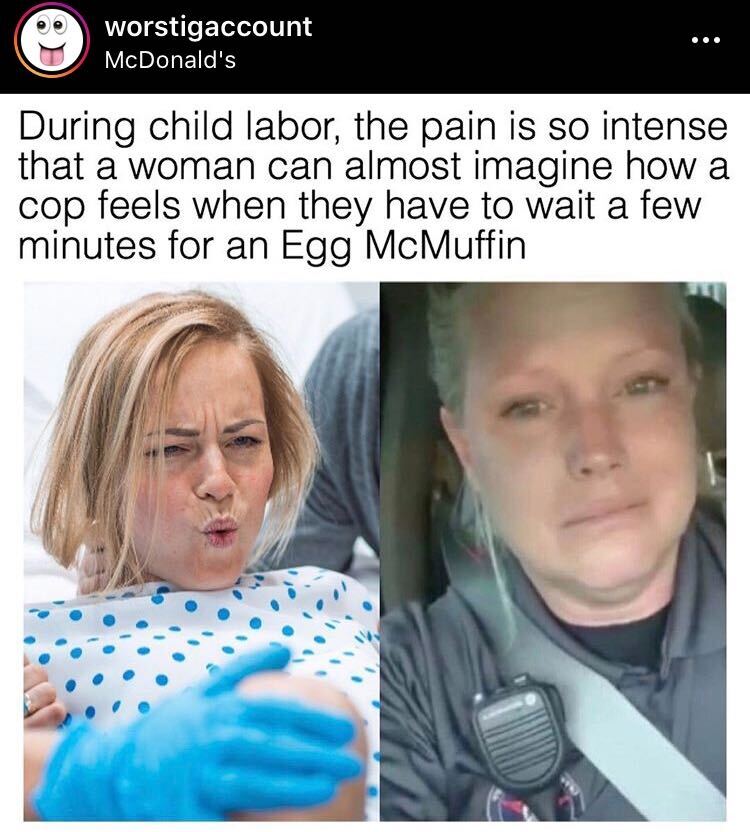 From what I know about McDonald’s, probably none of us want to see anything in there getting made. It will put us off our appetites forever. But Officer Stacy wasn’t done.

“I’ve been in this for 15 years and I have never ever had such anxiety about waiting for McDonald’s drive-thru food,” she concluded. “So just have a heart. If you see an officer, just tell them ‘thank you’ because I don’t hear thank you enough anymore.”

Yeah, no one is gonna thank you for accusing them of being poisoners while crying in a parking lot. Cops like to think they’re tough, but no one in this state should have a weapon and the all-clear to use it. To be clear, this officer was never denied service, never received or ate anything that hurt her in any way, and all her fear of food being tampered with is coming from her head, not from any actions on the part of the employees. She waited an extra six minutes for her McMuffin. Pretty normal! 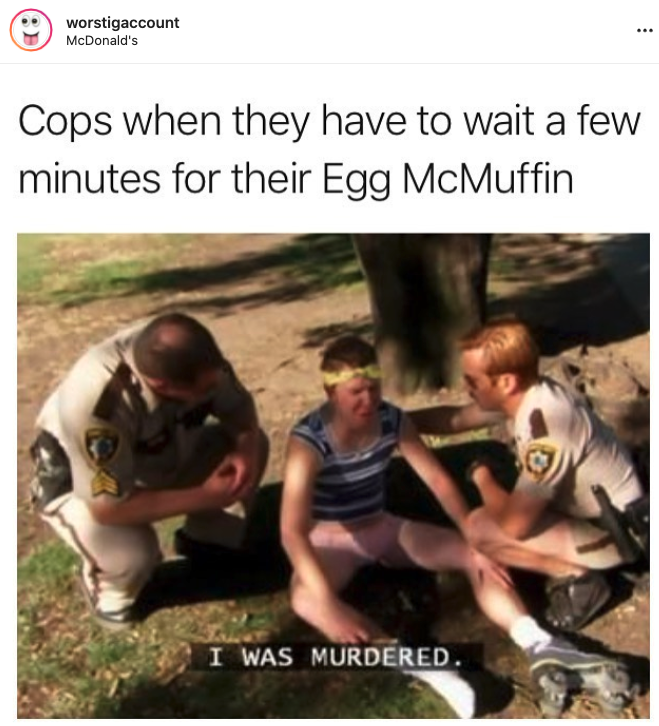 And maybe that’s the point: Officer Talbert wants to be treated like she’s way better than normal. Instead, she’s just getting mocked on Twitter:

the mcmuffin cop video cannot be real. my mind cannot accept the premise that someone who has a total breakdown victim moment over the universal experience of a fast food place forgetting & screwing up their order, is also the same person who can kill me cause they were scared

As hilarious as Cop McMuffin is, the larger trend of cops being paranoid about being poisoned at even fast food drive thrus reveals the extent to which cops view ALL of the public as enemy combatants. This is an attitude only an occupying military force can have.

Today a cop whined because it took her too long to get her food. It took 6 minutes and 13 seconds for her to get her tasty mcmuffin.

2 weeks ago George Floyd begged for his life because
a cop was murdering him. It took 8 minutes and 46 seconds before he died.

Karen in law enforcement, who is supposed to have sound judgment and courage, cried because she had to wait 3 minutes for her McMuffin & then became paranoid for no reason and was sad people don’t thank her for not murdering them? They need to make that lil cop test harder.

The cop shed more tears over a fucking egg McMuffin taking too long than they’ve ever shed over a single black life they’ve taken.

the disproportionate volume being given to the mcmuffin cop karen vs the actual goddamn lynchings of FIVE Black Americans the past week around the nation, several of which local PD tried to rule as SUICIDES should be indicative a problem that you all need to address in yourselves

officer karen cried harder over having to wait four minutes for a mcmuffin than literal children i’ve seen being tear gassed by cops for the crime of standing on a sidewalk. cops are fucking soft. we should bully them harder.

These tweets are a reaction to a female cop who started crying because her mcmuffin order took a while to get ready pic.twitter.com/wUmQoCQnz3